The path of Love & Devotion is never strewn with flowers. Only those lovers or devotees, who are staunch & fearless, immortalise their names in the world. This is the glorious saga of a great woman, a great lover, a great devotee-Kalindi- who had resolved to marry none else but Lord Krishna. Her father, Suryadev, however, treated it as just a whim of a young girl.

Bhaumasoor,-alias Narkasoor,-the mighty Demon-King, who had virtually become immortal by the boon of Lord Vishnu, secured by his mother Bhoodevi, was mercilessly oppressing the Bhaktas and kidnapping handsome maidens. Bhoodevi tried her utmost to prevent him from the path of sin, but in vain. Once, Bhaum kidnapped Kalindi also.

But, luckily, Shree Krishna rescued her. She dedicated her heart & soul at His feet but the Lord advised her to wait till the appropriate time came.

Drunk with power, Bhaumasoor invaded even Indralok and took away the precious Ear-rings of Dev-Mata Aditi, as a token of his victory. He captured Kalindi also and took her away to his palace. Bhoodevi tried to liberate Kalindi but Bhaum, who had now become a veritable Devil, imprisoned her also.

Repression & tortures are the well-known methods of tyrants, to subdue their victims. But, although delicate in body Kalindi had a heart of steel. She faced all the trials, unflinchingly & courageously and came out with flying colors, from every fiery test. No-doubt, Lord Krishna, the protector of his Bhaktas, saved her miraculously even from the poisonous snakes.

As time passed, Bhaumasoor captured 16100 beautiful damsels. Now Bhoodevi, in the cause of humanity openly opposed him and in the heat of anger Bhaum rushed to kill her. Just then, his own son, Prince Bhagdutt intervened. And to save her grand-son from annihilation, Bhoodevi had to sacrifice her own life. The heartless demon punished his rebel son by cutting-off both his hands.

And like Vibhishan, Bhagdutt with his fiancee Sheela sought the shelter of Lord Krishna. At the same time, Lord Indra, and Naradji also approached Dwarikadheesh with a request to kill the arrogant atheist and liberate Kalindi & 16100 maidens from his clutches. Lord Krishna, gave them a pledge to kill Bhaum. See the rest on the SCREEN. 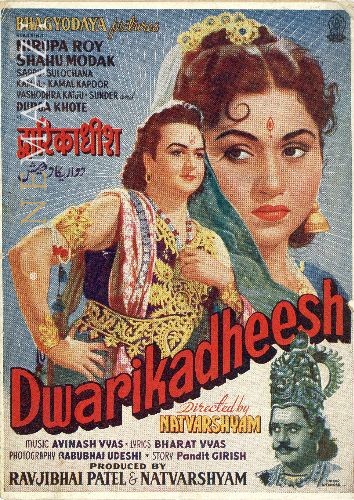