THAKUR Pratap Singh, an ailing old Zamindar of Allahabad, is surrounded by a group of flunkeys, each claiming to be a relation and expecting a goodly legacy at his hands in recognition of his services. The group consisted of Basant Devi, the keeper of the house, Jeevan, her son, Janki Das, the manager, Tara, the sprightly maid servant and Veersen, an unscrupulous, clever dandy.

The Thakur lives in seeming opulence , while he is really deeply in debt. On the sly he has offered his kothi for sale; and a flourishing young Barrister, Kailashnath Mathur, with the help of his shrewd, witty Munshi, Om Prakash, strikes a deal.

As fate would have it, however, the only child of Thakur Pratap Singh, a grown-up- daughter, Radha Rani, who was at college in England, is summoned home by the kindly doctor in order that she may be the bedside of her ailing old father. Veersen and Jeevan both aspire to Radha's hand. Radha begins to get fond of Veersen. It so happens that Barrister Kailashnath, during his visits to the kothi in connexion with the deal, happens to meet Radha Rani and conceives love for her.

Kailash has for his next door neighbour one Mr. Saksena, who has a pretty, marriageable daughter, Saroj. Saroj is thick with Mukta, Kailash's self-willed but devoted younger sister. Saroj, however, is a clever, designing sort of a girl, whose friendship for Mukta is only a cover for her tender sentiments towards Kailash. Kailash is unconscious of Saroj's advances and remains supremely indifferent.
In due course the kothi is purchased by Kailash but he does not directly get the possession. Now occurs a very strange incident-the only obstacle in the way of getting possession, namely the Thakur, is removed by what may be called an act of God. The Zamindar dies by poisoning.

Kailash thus comes to occupy the kothi he had purchased, and, with the kothi, he also gets the number of inmates, whom he allows to stay on Radha Rani, who on the death of her father had to undergo much suffering and ill-treatment at the hands of the ill-natured wife of a kindly relation, who gave her shelter, is married to Barrister Kailashnath Mathur and thus becomes restored, through a strange concourse of circumstances, to her father's kothi, Radha Kunj. A child is born to them. They name her Naina.

Veersen, deeply disappointed at the turn of events, harbours a grudge against Kailash and never loses and opportunity of poisoning. Radha Rani ears against her newly-married husband by whispering all manner of wicked lies.

Saroj, on the other hand, equally deeply disappointed with Kailash, still tries to puruse him. Kailash remains indifferent as ever, but occasionally he mixes with Saroj out of sheer courtesy, which Veersen notices and tries to eliminate Radha Rani form her husband.

Radha does ultimately fall a victim to the designs of Veersen and misunderstands Kailash and his association with Saroj. She soon becomes very unhappy. Veersen takes advantage of the situation and traps Radha in his room with evil intention. Radha in order to save her honour jumps from a window down into the river flowing below. She is picked up by a passing barge.

Radha Rani's sudden disappearance plunges the whole family into grief. Kailash is stunned. Frantic attempts are made to trace Radha but no clue is found until at last Kailash is convicted that Radha has killed herself.
Kailash marries again-the woman he has known, Saroj. But Saroj proves a wife very different from the angel he has lost. Saroj ill-treates Naina, another circumstance that makes Kailash extremely unhappy.

Kailash and his newly married wife, Saroj, leave for a hill station with Naina. Here on the hills they meet a nurse and bring her home to look after Naina. Naina takes an immediate liking for the nurse, an seeks her protection when her step-mother tries to rough with her. Who is this kindly soul who has hugged the child as if it were her own? Could she be Naina's own mother who was taken for dead all these days? And if, eventually, she was Radha Rani herself, does she get restored to her former position as the mistress of the house-the lawfully wedded wife of Kailash? Or does Saroj remain undisturbed as the sole mistress of Radha Kunj? And what happens to the real murderer of Thakur Pratap Singh? Is he at last found and made to answer for his foul deed in a Court of Law?
You must see "Hamari Duniya" on the screen to get the answers to these many questions. 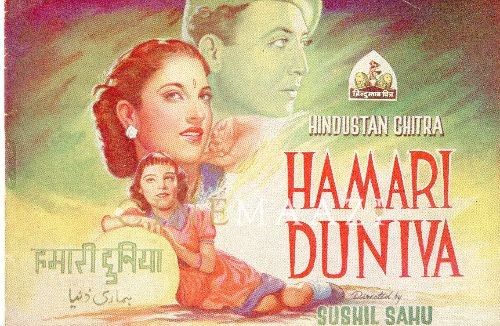 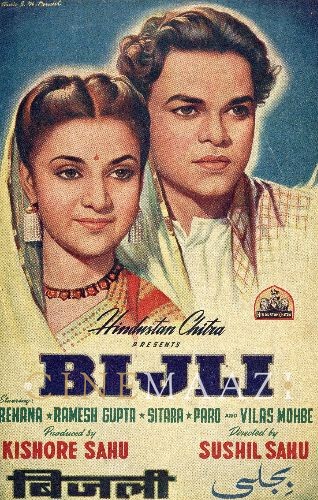