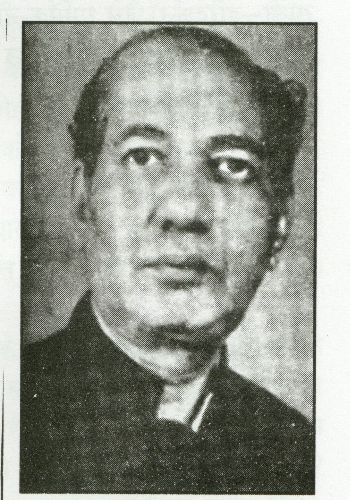 Shyam Babu Pathak was a prominent musician, film music composer and a gifted singer who remained prevalent in the Indian film music industry throughout the 1950s and onwards. Born in Gwalior in 1908, the eminent composer started his training in the field of music from an early age of seven and even received blessings from the renowned Hindustani musician Pandit Vishnu Digambar Paluskar. His talent as a singer was evident from the very beginning of his training and eventually he garnered an audience amongst the nobility of the times, and was invited to sing in musical gatherings hosted by royals. Travelling for these performances also allowed him to experience and immerse in the regional cultural nuances of different communities across the country, which only added to his prospering taste and knowledge of the field.

Already a prolific performer, Shyam Babu Pathak eventually came in contact with the film industry and was soon working for films like Royal Commander (1938), Torpedo (1941), Rani Sahiba (1940), and others, which did not turn out to be so successful. However, it was through Sunrise Pictures’ productions in 1942, with the films Malan and Ghar Sansar directed by V M Vyas, that the composer received a great opportunity to turn his luck around and compose the music for two well-received films. For these two films, he worked with eminent artists like Shanta Hublikar, Balwant Singh, Kalyani, Sardar Akhtar, and Kajjan. Some of the most memorable songs from these films include – Mala ayi gajra suhana liye, Dil mai teri yaad liye hum toh chalenge, Ghar sansar humara, and Dillagi dil ki lagi ho jaegi, among others. These compositions are still remembered for their unique melodies which imbibed the local cultural shades and overtones of different regions, a feature that was reflected in most of the composer’s works. In the same year, he rendered the music for Lajwanti, in songs like Idhar khushi, udhar khushi and Main preet kiye pachtai re, and for the film Pyara Watan, in songs like Gao kaliyon hass hass gao and Bole bole koyaliya kaali, in which he was able to imbue an aura of nature and the raw human emotion of every being.

In a few years’ time, Shyam Babu went on to work in collaboration with prominent Indian lyricist Indeevar, who was also struggling to advance his career at the time, for the musical score of films like Double Face (1946), Black Market (1947), and Namak (1947). In some regards, Pathak is considered to be in the same school of musical composers as that of the eminent S N Tripathi, who was hugely successful as a composer in the Hindi film industry. Being soulful and sensitive melodies, whether they were spiritual or universally common in feeling, and encased within an orchestra of classical Hindustani instruments, were some of the most characteristic features of this school of music. Carrying a tonality of gentle and sweet-sounding notes, which was a staple of Indian cinema music for some of the earliest films made in the country, these compositions remained prevalent for a considerable time in the industry.

Working on the soundtracks of films like Kismatwali (1947) and Taqdeerwale (1948), Shyam Babu came across some talented singers to whom he extended an opportunity for playback. These included renowned artists like Krishna Goyal and Sulochana Kadam, who went on to become prominent singers in the Hindi film industry. Furthermore, familiar with celebrated literary works, he took inspiration from the prestigious writer Harikrishna Premi’s poetry and set them to his beautiful compositions for the film Imtihaan (1949), directed by Mohan Sinha. He repeated a similarly thoughtful composition for Mohammed Rafi’s song, Dekho paanch paon mai pehen ke payaliya, which employed a verse by eminent poet Raskhan, in the film Janmashtami (1950).

A prominent highlight of his career as a music composer was the Kishore Sahu film – Hamari Duniya (1952), for which he composed a spectacular soundtrack that is celebrated in the industry to this date. The film’s song, Jiss din se juda vo humse hue, sung by Lata Mangeshkar attained great success and was loved by the audience. This film and others after it also reflected some of the shifting musical trends in the industry that marked an advanced orchestration and a greater prominence on rhythm, which was slightly different than his usual style and tone. This shown to a great degree in the musical compositions for films like Sapna (1952) and Vanraj (1952).

Although Shyam Babu worked extensively with the biggest names in the Indian music industry at the time, his success was intermittent and short-lived. He made several attempts at creating contemporary works which could match the speed and sense of the times, however, his attempts to make that mark in the industry remained fallible. His later contributions include the musical score for films such as Bombay Central (1960) and Mehbooba (1965). In the 1980s, he made his final attempts to contribute to the film industry successfully and finally, distanced himself from it forever.