Janaki, a village belle, and Uma, an educated girl, are two orphan sisters. Janaki grooms Uma and sends her to study law in the metropolis. Uma does not know what sufferings her sister goes through to educate her. Only Kaka, a retired school master, who is their friend, philosopher and guide, knows the truth. Uma falls in love with Shankar, a student of Engineering whose elder brother Shekhar is a Judge. Uma and Shekhar complete their studies simultaneously. Kumud and her photographer brother Rajoo are common friends of Uma and Shankar.

After the convocation, Shankar proposes to Uma. But before taking any step she wants to meet her sister Janaki who is like her mother and a Goddess. She meets her and comes to know that her sister has sold everything for the sake of her education and is leading the most miserable life herself. Janaki wanted to make Uma a Vakil and now her dream is fulfilled. Old Kaka and Uma insist for the marriage of Janaki.

One day Uma and Shankar meet in Kumud's marriage. Afterwards they go to a secluded place and sing love lores, when she notices a man murdering a girl on a hillock. The murderer's face haunts her through her daily routine. Old Kaka arranges the marriage of Janaki with Shankar's brother Shekhar, the Judge, who was his student in his childhood and who studied on the scholarship named after Janaki's father. Judge Shekhar reaches Janaki's house in the marriage procession when Uma recognises his face and shouts that he is the murderer. But fate is spinning a different pattern. Shekhar and Janaki get married against Uma's pleadings and protests. Uma is unable to reconcile to the marriage of Janaki and Shekhar.

Uma goes to work as apprentice under an eminent lawyer. One day she reads in the newspaper that Kumud's husband had been arrested for the murder which she had witnessed with her own eyes and she knew the murderer. Her conscience could not permit her to see an innocent person's victimisation when she could avert it. She is torn between sister and friend. Justice and Injustice. Love and Duty. But she decides to fight and save the innocent at any cost.

The case opens in the court where her brother-in-law Shekhar is the Judge, she the defendant's lawyer and her sister an observer. Hereafter incidents occur speedily. Shekhar is removed from the seat of Judge, placed in the witness box, then an accused box by her. Kumud, her friend, is murdered by Shekhar alongwith her maid servant. Uma proves that her brother-in-law has committed three murders. The innocent man is released.

Who wins the battle between Duty and Love, Faith and darkness of Doubt, Truth and Reality, Justice and Injustice? What happens to Judge Shekhar? To find out all these things one has to see "INSAF". 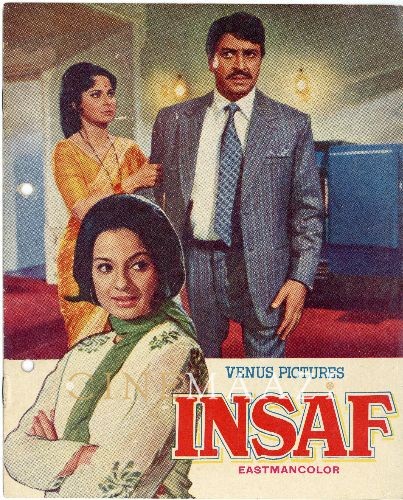