Since many thousands of years, Indian women observed the religious ceremony of "VRAT" of "KARVA CHOUTH" for the welfare of their thousands.
The "VRAT" OF "KARVA CHOUTH" presents a powerful Drama on the life of a simple village girl Mangla, who went to temple every day with some fruits and flowers for the temple priest.

One day she saw a young man Anand, lying wounded seriously and the Priest nursing him, the Priest asked her to nurse the sick man.

Mangla and Anand fell in love and marry secretly from now her destiny takes many strange turns hard to understand.

When Anand brings Mangla as his wife to home, his elder brother Mukund was pleased, but his wife secretly burn with hatred against Mangla, because her plan, to marry Anand to her sister Rambha to make her owner of family property, failed. Anand's elder brother had no child and now Mangla's child could become owner of the property.

When Anand and his brother went out of town on business, Mangla was expecting a baby. When they were away from home, Mangla gave birth to her child. Mukund's wife sent away the baby to be killed and placed a snake as the baby of Mangla.

Mangla surprised very much but after some time believed and loved the snake as per child. Mukund's wife sent away the baby to be killed and placed a snake as the baby of Mangla.

Mangla surprised very much but after some time believed and loved the snake as her child. Mukund's wife, one day turned out Mangla from the home. When Anand returned home and heard that Mangla has given a birth to a snake and died out of shame, he practically became mad.

Mangla after facing difficulties and hardships reached he brother's house and observed the "VRAT" of "KARWA CHOUTH", but due to mistake of her innocent brothers, she failed to complete the vrat and at the same time one another snake killed her husband Anand and then what strange things and wonders happen? Did Mangla find her husband again? What wonders are affected by the snake of God Shankar?

See these remarkable events never to be forgotten in "KARWA CHOUTH". 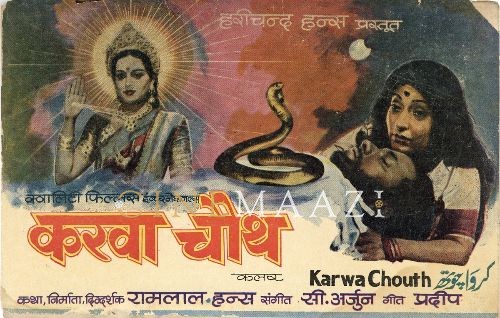