Man Mohan was the 'Munim' of Ram Bahadur. He could hardly make the both ends meet, and therefore he was compelled to give one of his twin daughters to his friend Jag Mohan who lived in a village.

Both the girls grew up in different environments.

Lakshmi (Mala Sinha) who was brought up by Jag Mohan, fell in love with Raj Bahadur, Raaj Kumar the only son of Ram Bahadur. They were soon married. Raaj did not care to inform his father, as the two had severed all connections with each other. Lakshmi gave birth to a son.

Ram Bahadur came to know of his son's marriage through his nephew Pran Bahadur. Ram Bahadur called his son to the city to talk the things over. Pran got a chance to put his evil scheme to work. He convinced Lakshmi and Jag Mohan that Raj Bahadur was killed in an automobile accident and they left the village.

The marriage of Lalita (Mala Sinha) Man Mohan's other daughter couldn't be solemnized as the dowry wasn't paid in full. One Jeebanand volunteered to marry her but the police appeared on the scene before the complete rites were over. He was a wanted man on the run. Man Mohan died of shock.

When Raaj returned to the village, his wife and son had disappeared. Raaj felt that Pran was responsible for this. He returned to the city to settle the score. Pran tried to kill him but Rajan (Rakesh Khanna) a total stranger saved him. They both became friends.

Raaj sent Rajan to his estate and instructed him to impersonate him since nobody had seen Raaj before. Raaj himself remained incognito at the estate and kept the search on for his lost wife and child. He met his son Munna who was now four but the father couldn't recognise his son. Just the same they became pals.

When Rajan was on the train on his way to the estate, he met Lalita. They fall in love with each other. When Lalita's mother came to know of her entanglement with Rajan whom she thought to be Raaj Bahadur-a married man she objected very strongly to their growing love. Besides, Ram Bahadur was instrumental in her husband's death.

Although, Rajan loved Lalita very dearly yet he had to reject her in order to keep up his word given to Raaj Bahadur.

When Pran came to know of the fact that somebody else was in possession of the estate, he came to visit the imposter. But lo ! to his surprise, he found the real Raaj.

Did Raaj succeed in tracing Lakshmi and Munna? Whether Rajan and Lalita were united in the wedlock? And any more such corny problems will keep on teasing you, till, dear patrons ! You see 'Maryada' for yourself from beginning to end. 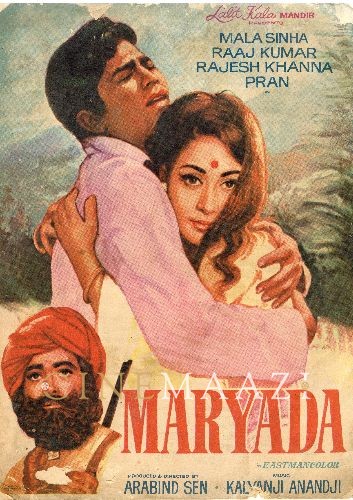