Kumar (Pradeep Kumar) is a brilliant young student. A bright future awaits him and Prabha (Jayashree Gadkar), a rich man's daughter, loves him and is about to be married to him. But fate casts a dark shadow on Kumar's life. Kumar's father (Badri Prasad) dies in the village and Kumar promises him that he will educate and bring up his younger brother Arun (Ashim Kumar) to be an ideal young man.

Arun, however, neglects his studies; he plays about with Nilu's daughter Shanti (Naaz). But with Kumar's ceaseless efforts and Shanti's inspiration, Arun passes the matric in first division. Before going to the city for further studies his marriage is fixed up with Shanti.

Arun is admitted to Kumar's old college. In the hostel, he meets Bilas (Agha) who had been Kumar's class-fellow too. When the other boys make a fool of the simple-minded Arun, Bilas sympathises with him and takes him out for a round of the city. Accidentally, Bilas meets Kalpana (Sumitra Devi) and introduces her to Arun.

Kalpana is a victim of circumstances - a respectable girl who because of Pran's (Pran) betrayal, has been forced to become a society woman. She is atonce attracted by Arun's simplicity and innocence.

Once, Jogeshar sees Arun and Kalpana together. Going back to the village, he tells this to Arun's mother (Padma Devi) and the old lady dies with the shock of it. Kumar is terribly angry and he tells Shanti that he now disowns Arun. In the city, Arun goes to Kalpana but, knowing that because of her he has neglected his family she asks him to leave her.

In the village, Kumar breaks Arun's marriage with Shanti but looking at her tears, he again decides to try to bring Arun on the right track. He leaves for the city and on the railway platform, he accidentally, meets Prabha who is now married to a Govt. Pleader.

At Kalpana's place, Pran offers her life (a cheque) or death (revolver). Kalpana accepts the loaded revolver for she hates life with Pran. Arun once again pleads that she should accept him but Kalpana is adamant.

Kumar is tried in the court by Prabha's husband while Prabha tries to defend Kumar. Will an innocent man be punished for a crime which he has not committed or will his dreams and desires be fulfilled by this supreme sacrifice? 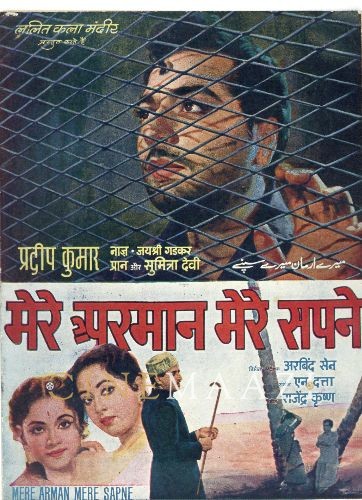