Indrani, a daughter of multimillionaire Seth Ratanlal, falls in love with an ordinary but honest Dinesh and vows to marry him. Dishonest and cunning servant Mohanlal gets hut to know this and starts bittering the cars of Seth Rattanlal against Indrani. Indrani confessing all this, gives a shocking news that she is going to be a mother of Dinesh's child.

Mohanlal gets beaten Dinesh from his hired gangsters and makes him underground and tells Seth Ratanlal that Dinesh absconded to London by giving false promise of marriage to Indrani.

To get rid of defaming, Seth Rattanlal gives the charge of this office and business to Mohanlal, leaves the city with his daughter for a few days.

Honest accountant Jagdish seeing Mohan Lal in the chair of Owner Seth Ratan Lal, and exposes his true figure of dishonesty and unfaithfulness. This insult hurts Mohanlal very much and as a revenge he makes Jagdish lame in an truck accident. Rajesh, son of Jagdish, takes a vow of revenge for the one who made his father lame.

After returning Seth Ratanlal comes to know that cunning Mohanlal has captured all of his business. Circumstances compel Indrani to marry Mohanlal.

Mohanlal's son Ranjeet, who is very helpful to the poor and very much aloof from the character of his father, gets released union leader Bajrangee from the jail.

Sunita with a view to take revenge works as a private secretary to Mohanlal.

Who was Sunita? Rajesh succeeds in taking revenge of his father of not?

Who was Ranjeet? What happened to Dinesh?

What was the result of dishonest Mohan Lal?

To know all these see "NASIHAT" on silver screen. 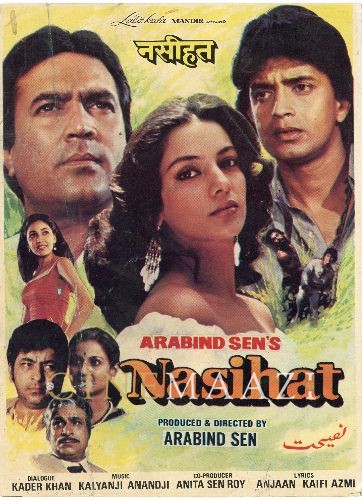