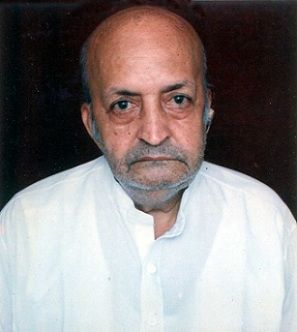 Choosing a curiosity-provoking and poetic-sounding nom de plume which translates as Anonymous, lyricist Anjaan went on to achieve considerable fame, penning over 1500 songs for more than 300 films. Famous for writing the lyrics of songs such as Khaike Paan Banaraswala from Don (1978) which was the biggest hit of his career, Rote hue aate hain sab from Muqaddar Ka Sikandar (1978), Pag ghunghroo bandh from Namak Halal (1982), Saara zamana haseeno ka deewana from Yaarana (1981) among others, he frequently collaborated with composers Kalyanji-Anandji, Laxmikant-Pyarelal, R. D. Burman and Bappi Lahiri. A successful all-rounder for almost 20 years in Hindi films, Anjaan’s poetry retained the flavour of the Bhojpuri language as well as the culture of Uttar Pradesh, the Hindi heartland.

A native of Varanasi and a lover of the Hindi language and literature, Anjaan was a regular participant in gatherings of Hindi poets. He used Urdu minimally, preferring to use the more contemporary Hindi in his compositions. He got his first film break with the Premnath production Prisoner of Golconda (1954) for which he wrote Lehar yeh dole koyal bole and Shaheedon amar hai tumhari kahani. A slew of smaller productions followed though his Mat poonch mera hai mera kaun watan from G S Kohli’s Lambe Haath (1960) did win appreciation. His work in Godaan (1963), based on the Premchand classic novel, with music by Ravi Shankar, further garnered him attention, and went on to bring him plum assignments in the mid-1960s, such as Guru Dutt's Baharen Phir Bhi Aayengi (1966) and G. P. Sippy's Bandhan (1969). These films helped establish Anjaan commercially. He thus began his collaboration with composers Kalyanji-Anandji, even as he went on to write lyrics for songs for music directors Shankar-Jaikishan's Umang (1970), Rivaaj (1972) and Ek Nari Ek Brahmachari (1971), Ravi's Vandana (1975), R. D. Burman's Hungama (1971) and others.

Over the course of time, Anjaan honed the art of blending lyricism and poetry into commercial songs. A prolific writer, he created some of his best work in Amitabh Bachchan films, starting with the heart-warming Luk chhip luk chhip jao na in Do Anjaane (1976) with music by Kalyanji-Anandji, followed by Barson purana yeh yaarana in Hera Pheri (1976), the title song and Bani rahe jodi raja rani ki in Khoon Pasina (1977), Rote hue aate hain sab, O saathi re, Pyar zindagi hai, and Dil to hai dil from Muqaddar Ka Sikandar (1978), Khaike paan Banaras wala, Ee hai Bambai nagariya, and Jiska mujhe tha intezaar from Don (1978), Jiska koi nahin, and Kab ke bichhde from Lawaaris (1981) and Jaadugar (1989). He wrote hits for Bachchan with other composers as well such as Rajesh Roshan in Do Aur Do Paanch (1980) and Yaarana (1981), Bappi Lahiri in Namak Halaal (1982) and Sharaabi (1984) and R. D. Burman in Mahaan (1983).

If Anjaan could dash off lyrics for peppy chart-busters, he was also adept at crafting more meaningful songs such as Yeh faasle yeh duriyan in Zameen Aasman (1984), Hamrahi mere humrahi in Do Dilon Ki Daastaan(1985), Yashoda ka nandlala in Sanjog (1985), Sadiyan beet gayi from Triveni (1970) and the poetic songs of Eeshwar (1989).

He suffered a health crisis in the early 1990s, though he did deliver hits in films like Aaj Ka Arjun (1990), Zindagi Ek Jua (1992), Dalaal (1993), Ghayal (1990) and his last hit Shola Aur Shabnam (1992).
In the 60s itself Anjaan dabbled in non-film music as well, writing for albums composed by Shyam Sagarand sung by Mohammad Rafi, Manna Dey and Suman Kalyanpur. He also made his debut in Bhojpuri films writing lyrics for the very successful Balam Pardesia (1979), including the chart-busting number, Gourki patarki re.

Not long before he passed away on 13 September, 1997, his only book of poems, Ganga Tath Ka Banjara (A Gypsy from the Shores of the Ganges) was released by Amitabh Bachchan.