Vidya, young in age, had to give up her education, after her mother's death to look after her father, whom she affectionately called Bapu and her younger brother Rajoo. To her the whole purpose of her life was to look after her father's comforts and bring up young Rajoo as her mother would have wished. She dreamed that one day the boy would become big, meritorious in his studies and achieve big success in life ... and when all this would happen she thought there would be ample time for her to think of her own marriage, a family, her own future.

But all her love, all her care couldn't change Raju's nature : he was deceptive, bunk his school, play pranks on his fellow students, beg in the streets for fun, and do all those things which Vidya abhorred. All her attempts to reform him failed.

However, all this changed one day ... suddenly, unexpectedly : Rajoo stole some money from a fellow student in the class... and unable to stand the shame of his son being branded a thief, Bapu met with an accident in the factory and died.

Bapu's death made Raju realise the gravity of his actions and he vowed that never again would he steal, would he play evil pranks...and promised Vidya he would become a good boy, and be all that she wished him to be. This promise of Raju brought tears of joy to Vidya's grief stricken face, and she thought her dreams would become true...

But alas, it was not to be.

While on their way to Bombay to their Uncle's place, Vidya and Rajoo get separated.

Raju gets picked up by a gang of hoodlums who force him to do all those things which he had promised his sister he wouldn't do-pick pockets, beg in the streets, steal...But Raju who was determined  to be true to his vow waits and when the opportunity comes he breaks away from the gang and runs out on them.

Finally he is picked up by Sunil, a Lawyer and his childless wife who adopt him. Rajoo finds a home, but pines for the sister he has lost.

Vidya after a fruitless search for her young brother, finds a job as a maid servant in the house of a rich couple. Their only son, Anand is a playboy- a dashing young casanova who spent his days chasing women and his nights in drunken reveleries. His lustful eyes rove over Vidya's beautiful body and one night he attempts to rape her. In trying to escape from him, she dashes into a speeding car driven by Sunil, is knocked down and taken to the hospital with multiple injuries.

This fateful accident is a turning point in the lives of all the characters in the film. Vidya comes out of the operation theatre a blind girl-surrounded by darkness.

Sunil feeling guilty adopts her as his sister and wants to take her to his home, but she refuses.

Anand learns that it was his lust which enveloped an innocent young girl's world into total darkness. He gives up drinking and his debauchery becomes reformed and proposes to Vidya to marry him.

Vidya a noble person turns down Sunil's offer to come to his house; she also refuses to marry Anand, because she does not want to ruin his life...

From here the picture moves on to a thrill filled climax when finally Vidya meets her brother and Anand get redeemed.

How it happen s can only be seen on the screen. 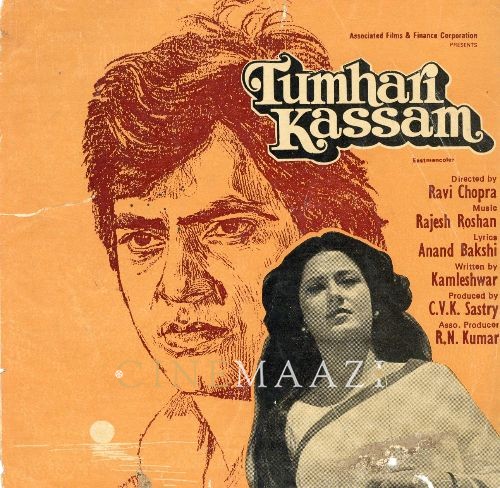