‘VIJETA’ literally means ‘THE WINNER’, ‘THE VICTOR’ or ‘THE CONQUEROR’. Inspired mainly by characters and real-life accounts of Indians who have lived in the country since it became independent in 1947, ‘VIJETA’ encompasses a time-span that stretches from the turbulent period of the Partition riots to the 1971 Indo-Pakistan war which changed the geography of the suc-continent yet again. The underlying thesis is that the individuals as well as nations become nature only when they are liberated from fear and insecurity, anxiety and doubt.

Nihal Singh (Shashi Kapoor) is a Mona Sardar settled in Bombay and doing well for himself as a radio commercial and advertising-film maker. A victim of the Paritition riots which he barely escapes with his mother Biji (Dina Pathak), Nihal is subconsciously haunted by the trauma and guilt of that great crisis in his life. Having had to start life from scratch, Nihal is obessed with success and providing a firm base for himself and his family which consists of wife Nileema (Rekha), an intellectual type whose interest lies in the arts and literature and who lectures at the University to retain her individuality; and Angad (Kunal Kapoor) his only son whom the grandmother had brought up as a Sikh because she sees in him the values of the Sikh tradsition for which at one time, his ancestors laid down their lives.

Things do not move smoothly between the ‘arty’ Neelima and the money-minded Nihal and their son, consequently, grows up into a shy, quiet and disturbed youth with a terrible sense of insecurity. A great change comes into Angad’s life when he, at the insistence of Neelima’s brother Arvind (Om Puri), an officer in the Indian Navy, joins the N.D.A. as an Air Force cadet.

At the National Defence Academy, Angad experiences for the first time, a totally different kind of life, making friends with boys from different cultural and socio-economic backgrounds. Here, Angad also strikes a lifelong friendship with Venkat Raju (Madan Jain), Aslam Khan (Raja Bundela) and Wilson (K.K. Raina). On completing the intensive training at the N.D.A., the four of them decide to join the Air force Academy near Hyderabad to become fighter pilots.

In the meantime Biji dies and Angad with a shock, realizes that his father is a broken man, he also realizes the bitter truth behind the relationship between his parents.

While at the Air Force Academy, two critical events occur which further change Angad’s life. Firstly, he meets Group Captain Verghese (Amrish Puri), a remarkable person who represents the spirit of the Indian Air Force and who also becomes the boy’s chief source of inspiration and guidance. Angad also meets Anna Verghese (Supriya Pathak), Gp. Capt. Verghese’s daughter, who is an amateur photographer like himself. They fall in love, but Angad is too shy to express his love for her.

At this stage, tragedy strikes Angad’s home once again and Nihal is left all alone in a house full of memories which might have been pleasanter. Angad and his friends along with Group Capt. Verghese are posted in Poona and just before the 1971 Indo-Pak war, the Group Captain succumbs to leukemia, leaving Anna in Angad’s care. However the captain’s spirit remains with the boys as they answer the call of duty and set out to do their bit for their motherland.

In the war, Angad’s plane is hit and he is ejected in the desert. He is reported missing and Nihal, on hearing the news suffers a massive heart attack. Father and son, both struggle to conquer fear and death at the same time. Finally, both emerge victors, what is more important is that having been through the experience, they both develop a new understanding of the purpose of love and life.

VIJETA is a cinematic tribute to the spirit and culture of India’s armed forces and especially the Indian Air Force in this, the year of its Golden Jubilee. 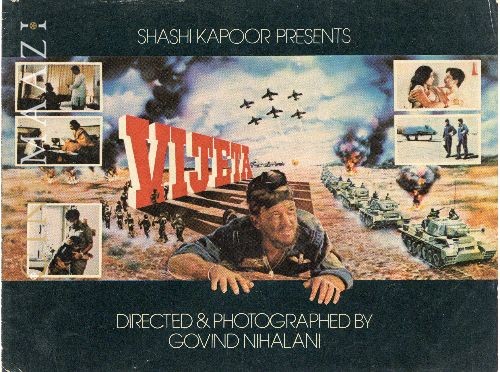