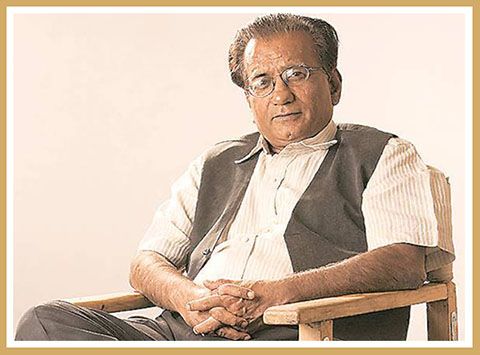 Born on 19 October 1947 into a Gujarati family, he was a commerce graduate. In the 1970s, he joined the Film and Television Institute of India to study direction. As Jai Arjun Singh’s book Jaane Bhi Do Yaaro: Seriously Funny Since 1983 tells it, Shah was idling about for a year till he was goaded by his building secretary to ‘do something with his life’. As he wasn’t yet a film buff but loved reading, he applied for jobs in publishing houses, and also worked at the Popular Prakashan publishing company. On the recommendation of a friend, he applied to FTII. Drawn to comedy, at the Institute he scrutinised the silent comedies of Charlie Chaplin and the Marx brothers. His 23-minute diploma film, Bonga, reflected his experiments with humour; it combined comedic elements with the gangster genre. His nonsensically humorous film came as a surprise to his peers, considering he was a fairly serious person himself. Later he would say, “I’m not too interested in humour for its own sake, though, of course, I respect those with the talent to make others laugh—that’s an art in itself. But personally I use it as a medium, a vessel.”

Even as he—like most of his batch-mates—struggled over the next few years to find his feet, he was struck by the example of two friends who didn’t return home but opened a photo studio and became industrial photographers. This was to become the seed of his debut film, the iconic Jaane Bhi Do Yaaro. Shah added his own experiences with ration offices and government offices in Bombay, as he detailed his lead characters’ financial woes and tragicomic acts. So engrossed was he in developing his story, that he even turned down the offer to assist Richard Attenborough on Gandhi (1982).

The comedy crime drama Jaane Bhi Do Yaaron, produced by NFDC, was made on a barebones budget of Rs 7 lakh. It was stuck in the cans for a year, before it released in 1983. It revolved around two friends, attempting to start their own photo studio, who come across shady dealings, corruption and murder, and must fight to bring the guilty to light. A dark satire on the rampant corruption in Indian politics, bureaucracy, news media and business, the film starred an ensemble cast including Naseeruddin Shah, Ravi Baswani, Om Puri, Pankaj Kapur, Satish Shah, Satish Kaushik, Bhakti Barve and Neena Gupta. The film won critical appreciation; however, it was no box office blockbuster. Eventually, it came to be regarded as a cult classic. The Indian Express pointed out that the film's high recall value even after more than 30 years, was due to its “superb satirical depiction of the essential, timeless, human condition: supreme self-interest versus some moral/ethical anchor. What made the depiction particularly powerful was its setting: India of the early ’80s.”

Shah won the 1984 Indira Gandhi Award for Best Debut Film of a Director for his work. The film was part of the NFDC Retrospective at India International Film Festival in 2006. In 2012, a digitally restored print of the film was released, receiving an enthusiastic welcome from the media and discerning filmgoers.

Not long after the film’s release, Shah, along with others, directed what was to become one of Doordarshan’s earliest and most popular sitcoms - Yeh Jo Hai Zindagi. Written by satirist Sharad Joshi, the sitcom revolved around a couple, a brother-in-law, and the trouble they get into. It featured Satish Shah, Swaroop Sampat, and Rakesh Bedi. His accomplishments in the field of television soared with his acclaimed directorials, including Nukkad and Wagle Ki Duniya. Nukkad portrayed the bittersweet daily lives of a bunch of lower income labour class Mumbai residents, with a cast comprising Dilip Dhawan, Sangeeta Naik, Pawan Malhotra and others. His Wagle Ki Duniya, based on R K Laxman’s Common Man cartoons, told the story of the agitated sales clerk Srinivas Wagle played by Anjan Srivastav.

In 1994, he returned to the big screen with the coming-of-age romantic film Kabhi Haan Kabhi Naa. A comedy drama, it told the tale of a dreamer who falls for a girl who is in love with someone else, and tries to create a rift between her and the man she loves. The film was a resounding hit, winning critical appreciation and commercial success for its humour-laced depiction of middleclass anxieties. The music by Jatin-Lalit was an added bonus. The film picked up Filmfare awards for Best Film (Critics) and Best Actor (Critics) for Shah Rukh Khan. It was premiered at the Indian Panorama section of the 24th International Film Festival of India.

Six years later, came his directorial Kya Kehna (2000), written by Honey Irani and starring Preity Zinta, Saif Ali Khan, and Chandrachur Singh. It portrayed the story of a young college girl who faces hardships and challenges after she becomes a mother out of wedlock. It drew mostly positive reviews. Aradhika Sekhon of The Tribune wrote, “The film itself has several flaws but the issues that it tackles are real. The director takes a straight, hard look at the problems of today and holds them up for exhibition. The Indian tendency is to sweep uncomfortable issues under the carpet but if films like Kya Kehna continue to be made, at least, we'll be forced to confront them.” The Indian Express commended Shah for making “a sensitive film, on a sensitive subject.”

The year also saw the release of Hum To Mohabbat Karega (2000), his directorial starring Karisma Kapoor, Bobby Deol, and Rohit Roy. The story revolved around Raju, a waiter, who is crazy about TV reporter, Geeta. During an investigation, in order to prolong their meetings, he bears false witness to a murder and misleads the police with a fake description.

His Dil Hai Tumhaara released in 2002, starring Rekha, Preity Zinta, Mahima Chaudhry, and Arjun Rampal, and revolving around two sisters falling in love with the same man. While the film was credited with ‘tugging at the heartstrings’, for some, it was considered one of Shah’s "more lopsided, half-hearted films.”  Preity Zinta, with her “mixture of vulnerability and brashness” was attributed as the only bright spark in a dull drama. The comic thriller Ek Se Badhkar Ek (2004), and the sombre drama Teen Behenein (2011), was followed by Mumbai Cutting (2008), which had 11 directors tell 11 different stories about Mumbai, and P Se PM Tak (2015), a comedy of errors wherein Kasturi, a prostitute, gets caught in the middle of an elaborate scheme orchestrated by two warring political parties.

Through the years, Shah did direct social dramas and family-friendly films, laced with humour; in all his successive work, the sheer desperation of Jaane Bhi Do Yaaro was absent. In 2015, amidst reports of him planning to make a sequel to his debut film, he quipped, “There are a lot many Tarnejas (corrupt builder character) now in comparison to when Jaane Bhi Do Yaaron got made.” The sequel was not to be.

His demise brought forth an outpouring of emotion for the filmmaker. Filmmaker Saeed Mirza penned the book I Know the Psychology of Rats, a deeply felt ode to his beloved friend and filmmaker Kundan Shah. Mirza wrote, Shah, a maverick filmmaker, used ‘humour, the absurd and the grotesque” to unravel the times. “He was also a man who started out thinking all Marxists were a..holes and ended up being more Marxist than Karl Marx,” said Mirza. He shared that he felt the need to write the book to “present this wonderful, crazy, vulnerable friend of mine to the world because he deserves it.”

Naseeruddin Shah revealed that Shah was “one of the very few honest guys in that pretentious lot of ’70s ‘alternative’ filmmakers. He spent himself completely with Jaane Bhi Do Yaaro, which is why he didn’t do anything close to it again.” In 2008, Naseeruddin Shah had offered another possible reason why Shah didn’t match his seminal work ever again… “Maybe his (and I shrink from using this weighty term) world view has changed with his subsequent monetary success, which, though well-deserved, has perhaps severed his connections with his muse: the underbelly of life. He does seem removed from the position of nervy onlooker and underdog and placed in one of repute and responsibility.”

Actor Pawan Malhotra shared that Shah was very knowledgeable and not just about cinema. “Way back in 1986, he revolutionised the way we looked at television. The work that he did in Nukkad, Manoranjan and Circus remains unparalleled to this day on Indian television… The wisdom and intelligence he brought to television and then to cinema with Jaane Bhi Do Yaaron, was amazing.” He also revealed that Kundan was a hard taskmaster, expecting plenty from himself and from those around him.

As Jai Arjun Singh writes in Film Companion, Shah used the word ‘fluke’ a great deal, whether discussing his life or his professional arc. He always emphasised the randomness of things…all of it leading up to the observation about how his iconic film “just happened somehow, nobody could have planned for something like this to be a success.” Singh also surmises that the set of factors that came together for Shah in 1982, never came together in the same way again. Shah was evidently temperamentally unsuited to the demands of a commercial industry, being too much his own person. Despite the disappointments he faced, he remained always alert, curious and active, even when working by himself in his office.

In 2002, when quizzed if he could have produced more work in a career spanning more than three decades, Kundan Shah declared that the film industry had not always been willing to accept his vision. He put it succinctly: “I can only make what I can make, the rest I cannot.”