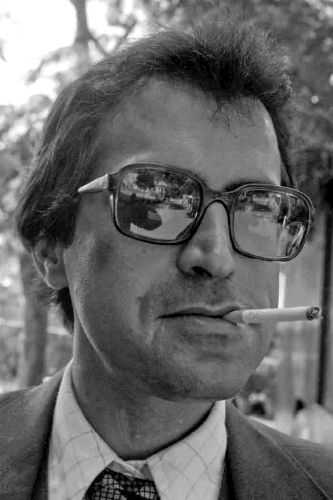 A household name for his iconic turns in the films Chashme Buddoor (1981) and Jaane Bhi Do Yaaro (1983), Ravi Baswani was one of the most renowned character actors of Hindi cinema.

Ravi Baswani was born on 29 September, 1946 in a Jat family in Delhi. He received his education from St George’s College in Mussourie, before going to study in Kirori Mal College in Delhi. He became heavily involved in the Delhi theatre scene as a member of his college’s dramatic society. At a time when English plays were in vogue, he acted and directed Hindi plays like Ballabpur Ki Roop Katha. He also taught theatre for a short while at the Modern School. It was through this circuit that he came to know Naseeruddin Shah and one day the script of Sai Paranjpye’s Sparsh (1980) fell into his hands. An impressed Baswani was convinced he wanted to be involved in the project, if not as an actor then in any way possible. He was taken on in the production department of the film, but his charisma shone through and soon got him noticed by Paranjpye. An offer for a key role in Chashme Buddoor soon followed (which was then titled Dhuan Dhuan) and Baswani seized this opportunity. Chashme Buddoor was a hit and Baswani’s character Jomo became very popular with audiences.

Baswani’’s skills as an improvisational actor would be on full display in the role that has made him immortal – the photographer Sudhir Mishra from the classic black comedy Jaane Bhi Do Yaaro. He was said to be the glue that held the film’s chaotic production together. Kundan Shah’s cult classic had the adequate zaniness and absurdity to give Baswani the opportunity to use the full range of his acting talent. And critical acclaim soon followed, landing him the Filmfare Award for Best Performance in a Comic Role. Post-JBDY, Baswani was very selective with the films he did. He worked in films like Ab Ayega Mazaa (1984), Main Balwan (1986), Ghar Sansar (1986), Jaan Tere Naam (1992), Kabhi Haan Kabhi Naa (1993), Laadla (1994), Chota Chetan (1998), Jab Pyar Kisise Hota Hai (1998), Pyar Tune Kya Kiya (2001), Bunty Aur Babli (2005) and Yun Hota Toh Kya Hota (2006).

He had a thriving television career, particularly in Doordarshan programming. He earned accolades for his role in the comedy series IdharUdhar. He also became the co-ordinator of the acting course in Film and Television Institute of India, Pune in 2004.

He was planning on making his directorial debut. Unfortunately, he passed away due to a heart attack on 27 July, 2010 before those plans could come to fruition. His innovative performances have earned him a place in the hearts of cinema audiences forever.