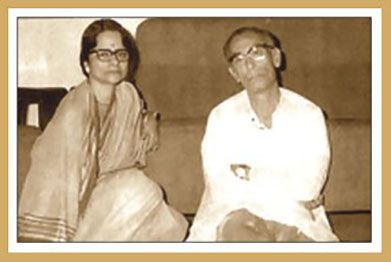 Born Meera Dasgupta in Comilla (Bangladesh) in March 1923, she went on to settle in South-end Park in Kolkata. She was a student of Amita Sen, mother of Nobel laureate economist Amartya Sen, who was trained in Rabindranath Tagore's Vishwa Bharati in Santiniketan.

She met S.D. Burman, who hailed from the Tripura royal family, at the All India Music Conference in Allahabad in 1937. She became a student of S.D. Burman and married him the same year.

After their marriage, S.D. Burman set to tune a number of songs penned by Meera Dev Burman, who was a singer in her own right.

S D Burman once wrote about her: “To make my all-music life a success, the services and help rendered by Meera Devi through her collaboration, assistance, inspiration, encouragement and sacrifice are omnipresent.'

After the demise of her husband in 1975, followed by the death of her son in 1994, her health deteriorated over the years due to advancing age. Life became difficult and she had to be frequently hospitalised. She was shifted from Agartala and placed in an old-age home for paraplegics in Mumbai. Later, she was moved to her son R D Burman's house in Mumbai by her daughter-in-law, noted playback singer Asha Bhosle. The Tripura government had felicitated her in Mumbai and also gave her some financial assistance for her medical treatment.

Meera Dev Burman passed away in Mumbai on 15 October 2007 after a prolonged illness. She was 84.