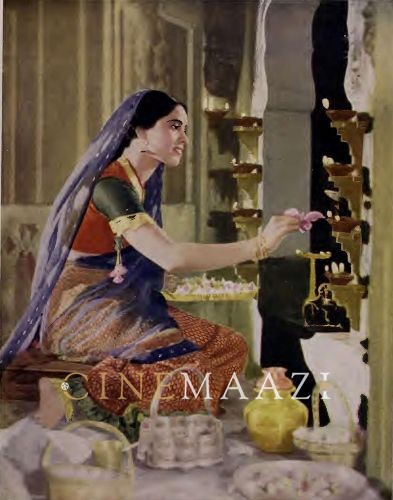 Credited as one of the great singing stars of the pre-playback era, along with Kanan Devi, Shanta Apte was born on 23 November, 1916. She worked in both Marathi and Hindi cinema, and is memorable for her roles in films such as Duniya Na Mane/ Kunku (1937) and Amar Jyoti (1936). Active in cinema from 1932 to 1958, she brought spontaneity and zest into the hitherto melancholic style of song renditions in films. Apte was considered ‘a woman of rare mettle’, whether it was staging a hunger strike outside Prabhat Studios regarding a clause in her contract, becoming a role model for young students with her roles in films like Duniya Na Mane, penning her autobiography Jau Mi Cinemat in which she dissected the power structure in the industry and warned of the pitfalls facing an artiste, or even allegedly taking a stick to a film magazine editor who had irked her.

Born in Dudhni, Maharashtra, she displayed a talent for singing, like her station master father. Rendering bhajans at the annual Ganesh festival in Poona, she went on to study music at the Maharashtra Sangeet Vidyalaya in Pandharpur. She was but 9 when she was introduced by actor-director Babaurao Pendharkar to films as a child artiste, acting in Shyamsunder (1932), playing the role of the young Radha. Her opportunity came when Prabhat Studios moved to Pune from Kolhapur in 1934.  She played the hero’s sister in Prabhat Films’ Amrit Manthan (1934). Directed by V Shantaram, the film turned out to be a box office bonanza, celebrating its silver jubilee by running for 25 weeks in a single cinema hall. It was also screened at the International Film Festival, Venice. Apte’s big break, she also rendered four solo songs in the film, including the first film ghazal - Kamsini mein dil pe gham ka. Set in the Buddhist period, Amrit Manthan examined primitive religious practices and featured a high priest who believes in human sacrifice to appease the gods. The popularity of Apte’s songs created forays for Prabhat in North India. She also overcame Keshavrao Bhole’s initial doubts to render the songs with a refreshing spontaneity. With the songs from the film becoming huge hits, a spate of films followed for Apte, who became one of the three women stars of Prabhat, along with Durga Khote and Shanta Hublikar.

Apte went to feature in Amar Jyoti (1936), another Shantaram directorial, co-starring Durga Khote, Vasanti and Chandra Mohan. The film was Prabhat’s first to have playback singing. The following year, she enacted the role of a young girl who is married off to a rich widower, and her subsequent protests to acknowledge him as her husband. The film, V Shantaram’s Duniya Na Mane/Kunku (1937), became one of the biggest hits of Apte’s career, praised by audiences and critics alike. The film saw Apte’s character going from a carefree girl to a determined woman, giving her ample scope to display her acting talent. The film also featured her singing an English song, a version of H W Longfellow’s Psalm of Life. She went on to feature in another famous film from Prabhat Films, Gopal Krishna (1938), directed by V Shantaram.

Shanta Apte was perhaps the only actress to have worked in films made in all the film centres, including Bombay, Poona, Kolhapur, Madras, Lahore and Calcutta. She also had the rare honour of singing with three iconic female singers of Indian cinema—M S Subbulakshmi, Noor Jehan and Lata Mangeshkar. While she acted in the Tamil film Savithri (1941), playing the title role and also singing in the film, the legendary M S Subbulakshmi played the male role of Narada. Apte also worked in the social melodrama Duhai (1943), with Noor Jehan playing the second lead. In Master Vinayak’s mythological with comic elements, Subhadra (1946), Apte and Lata Mangeshkar together sang the song Main khili khili phulwari. Her other films in this period include the Sarvottam Badami directorial, Uttara Abhimanyu (1946) co-starring Shahu Modak; Panihari (1946) directed by V. M. Gunjal, and Maharishi Valmiki (1946) directed by Bhalji Pendharkar, featuring Prithviraj and Raj Kapoor. Post 1946, she no longer sang for Hindi films, with the exception of a few songs.

The following decade saw a reduction in work for Apte, though she did feature in Marathi films like Raja Paranjpe's Jara Japoon (1950), Kunkvacha Dhani (1951), Tai Teleen (1953), and Mulu Manek (1955). She also starred in two Hindi films—Chandi Puja (1957) and Ram Bhakta Vibhishan (1958). Appearing only in Marathi dramas thereafter, her work ground to a halt by 1960. She also wrote an autobiography titled Jau Mi Cinemaat? (1940).

Shanta Apte was known to symbolise the power of women both on and off screen, featuring in hard-hitting films that tackled social issues. However, despite enjoying an illustrious career, she experienced a downfall, preyed upon by an uncaring family and eventually abandoned. Shanta Apte passed away due to a heart attack following a six-month illness, on February 24, 1964, at her residence in Andheri, Bombay.

She is nonetheless remembered as a fiery actress and a gifted singer, one of the more compelling early woman stars of Indian cinema, who refused to bow down to societal conventions.