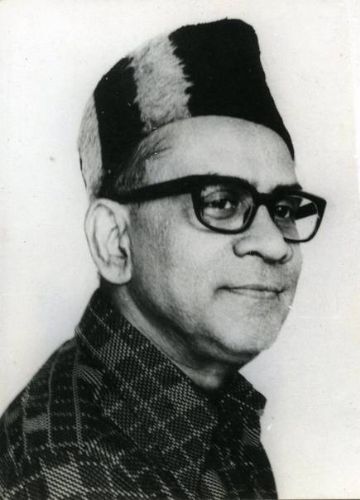 Playback singer Prathivathi Bayangaram Sreenivas or P B Sreenivas, as he was popularly called, is known for his work on Gandhada Gudi (1973), Sahasra Siracheda Apoorva Chinthamani (1960) and Bobbili Yudham (1964). His lilting bass voice conveyed the spectrum of human emotions, from sadness to romance and joy, in the songs he rendered mainly in Kannada, as well as Tamil, Telugu and Malayalam films.

He was born on 22 September, 1930 in Kakinada, Andhra Pradesh. Obtaining his the BCom degree, he also passed the South Indian Hindi Spreading Society exam - Hindi Visharad. In his early twenties, he had the opportunity to sing a few lines for the Hindi film Mr. Sampat (1952), which was based on R K Narayan’s novel. This chance came his way thanks to his father’s friend Eemani Sankara Shastry, who had composed the music for the film. His song with Geeta Dutt - Aji hum Bharat ki naari from Mr. Sampat became very popular. This was a multi-language film released in Tamil, Telugu, and Kannada with a different title. Sreenivas spent the next few years attempting to carve a career for himself as a playback singer in the film industry. In his early years in films, he sang with Jikki, Getta Dutt, and Shamshad Begum.

In the Kannada film industry, Sreenivas’ first hit song was Baagilanu teredu from the film Bhakta Kanakadasa (1960). He gave voice to superstar and legendary actor Dr Rajkumar. In 1955, he sang his first Malayalam song for the film Harischandra. His first real break in the Tamil film industry came with Veerapandiya Kattabomman (1959). With music by G Ramanathan, he gave voice for Gemini Ganesan in the song Inbam pongum vennila with P Susheela. His work in Adutha Veettu Pen (1960) established Sreenivas’ credentials as a singer with a place of his own in Tamil film music. His songs Kannaley pesi pesi kollathey, Vanitha maniye and Maalayil malarsolaiyil became very successful. He sang for music director G Ramanathan again in the film Kappalottiya Tamizhan (1961), rendering Kaatru veliyidai kannamma. He rendered many mellifluous songs and, in time, replaced A M Raja as playback singer for Gemini Ganesan.

P B Sreenivas sang fewer songs in Malayalam as compared to Kannada, Tamil, and Telugu. Also a poet, he was fluent in 8 languages namely Tamil, Telugu, Hindi, English, Telugu, Kannada, Urdu, and Sanskrit, even writing many poems in these languages. In 1969, he penned a poem in English in praise of man’s landing on the moon. Besides composing poems in the Urdu, he also wrote Urdu ghazals for the film Nandu (1981) directed by J Mahendran.

While Sreenivas had rendered playback for practically all the superstars of South India, his collaboration with Kannada matinee idol Dr Rajkumar was much appreciated. He sang approximately 300 hit songs for the star, through the 1950s, 1960s and 1970s. Dr Rajkumar himself was well aware of the specialness of their association, and had described Sreenivas as his Shàreera (voice in Kannada), and himself as a mere Sharira (body in Kannada). Dr Rajkumar thus summed up how some of his best-known films were incomplete minus Sreenivas’ singing.

P B Sreenivas passed away due to a heart attack on 14 April, 2013 at his home in Chennai, Tamil Nadu. He was 82.He was survived by his wife, four sons and a daughter.

On his passing, Chief Minister Jayalalithaa said PBS had sung in 12 languages and his voice added further mellifluousness to film songs. “PBS can also mean Playback Singer. His death is an irreparable personal loss to me and to the film world as a whole,” she said. In a condolence message, Tamil Nadu Governor Rosaiah said Sreenivas had left his rasikas spellbound with his melodious voice, while his devotional songs transported listeners to the realm of divinity.

Sreenivas’ biography was released on 7 May, 2013 by renowned personalities such as Dr K J Yesudas, Dr S P Balasubrahmanyam, and Vani Jairam. It was penned by Sri R Srinath and published by Surabhi Prakashana (Bengaluru).