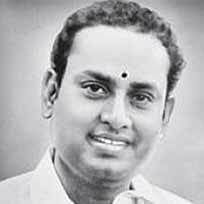 Thanjavur Radhakrishnan Ramachandran, or T R Ramanna as he was better known, was a well-known producer and director of Tamil cinema, who also produced successful films in Telugu and Hindi. A stylish director of merit, he directed around 30 films, most of which were hits. Known for his diverse narrative skills, he also took social and spiritual themes to the audiences, via films such as Kathavarayan (1958), Sri Valli (1961), Arunagirinadhar (1964) and Ilangeswaran (1987). His popular films include Vazhappiranthaval (1953), Puthumai Pithan (1957), Periya Idathu Pen (1963), Panakkara Kudumbam (1964), Parakkum Pavai (1966), Naan (1967), Moondrezuthu (1968), Thanga Surangam (1969), Sorgam (1970), Ennai Pol Oruvan (1978), and Kuppathu Raja (1979). Even in the times of slow-paced films, Ramanna’s films such as Puthumai Pithan and Gulebakavali (1955) were pacy and richly entertaining, with exciting action and music.
Born Thanjavur Radhakrishnan Ramachandran in 1923 in Thanjavur to Ranganayaki and Radhakrishnan, he hailed from a family popular for their prowess in Carnatic music. His elder sister, T R Rajakumari, was an acclaimed Carnatic singer and dancer as well as actress in Tamil films. T R Ramanna, as he became better known, started his career as a sound engineer. He worked with director K R Subramaniyam in the department of film production, and made his way to film direction. He went on to start his production company, R R Pictures, which bore the initials of himself and his sister, R Rajakumari. Producing successful films in Tamil, Telugu and Hindi, one of his hits was the film Manapandhal (1961). It was inspired by the Hollywood classic Sabrina (1954), directed by Billy Wilder which starred Humphrey Bogart, William Holden and Audrey Hepburn.
Marrying leading actress B S Saroja in 1949, she played a key role in nurturing and encouraging his directorial capabilities. Together, Ramanna and Saroja started three production companies, namely R R Pictures, Ganesh Pictures and Vinayaga Pictures. The first film that he directed was Vazha Pirandavan in the year 1953. He went on to direct and produce nearly 30 films in Tamil, one Hindi film Yuvraj (1979), and one Telugu film Manchi Chedu (1963), along with some Kannada films. B S Saroja herself oversaw all the expenses and income accounts for film production.
Ramanna was knowing for being innovative and forward-thinking. He started the trend of presenting the popular star M G Ramachandran, better known as MGR, in western clothes. MGR was convinced and appeared in shirt and trousers in a song in Ramanna’s film Periya Edathu Pen (1963). The song-dance sequence became a rage and thereafter producers en masse demanded similar sequences featuring MGR. To him also goes credit for making the only film starring both MGR and Sivaji Ganesan, namely Koondukkili (1954). He also made films separately with both heroes. His films with Sivaji Ganesan include Kathavarayan (1958), Thanga Surangam (1969), Sorgam (1970) and Ennai Pol Oruvan (1976). Of these, Kathavarayan was based on Hindu mythology, while Sorgam was a breezy family drama, and the other two were action packed entertainers. With MGR, Ramanna made films that showed a variety in theme and storyline. While Periya Idaththu Penn (1963), Panakkaara Kudumbam (1964) and Panam Padaithavan (1965) were powerful family dramas, Gulebakavali (1955) was an out-and-out entertainer, while Pudhumai Pithan (1957) was in the genre of historical fiction, and Parakkum Paavai (1966) was a thriller. He also made an offbeat film Paasam (1962) with MGR, which portrayed the usually positive-spirited hero in a web of tragic circumstances, resulting in his death.
Ramanna later made films with new heroes such as Jaishankar and Ravichandran. He also made Kuppathu Raja (1979) starring Rajnikanth which became a big hit. The heroines he frequently worked with were B S Saroja, Jayalalitha, Savithri, K R Vijaya, Bharathi, Usha Nandini and Radhika. He worked with well-known comedians of Tamil cinema such as K A Thangavelu, J P Chandrababu, Nagesh, Suruli Rajan, Thengai Srinivasan and Ennathe Kannaiah. Among villains, his most preferred actor was R S Manohar, followed by S A Asokan.
Ramanna was also a keen novelist.
On the personal front, Ramanna married B S Saroja in 1949 at Ranganathar Temple, Mahabalipuram. The couple had three children, son Ganesh and daughters Kalarani and Shanthi.
T R Ramanna passed away on 22 May, 1997.