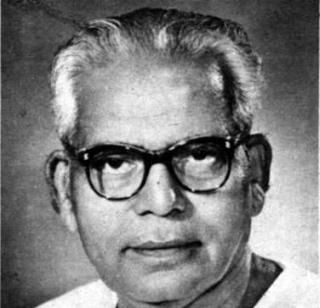 A prominent Marathi playwright and novelist, Vishram Bedekar left an equally influential imprint on Indian cinema. Shifting to cinema in the 1930s, he was known for his sophisticated socials and melodramas.

Born on 13 August, 1906, he later went to Nagpur for his studies. After moving to Pune in the 1930s, he joined the Sangeet Natak group, Balwant Sangeet Mandali. As a playwright he wrote several significant plays like Brahmakumari, Vaje Paool Apule, Naro Wa Kinjaro Wa and Tilak Ani Agarkar. He wrote his only novel Ranangan in 1938 which created quite a stir with its romance between an Indian man and a German Jewish girl. The transition to cinema happened when his troupe adapted their successful play Krishnarjun Yuddha into a film in 1934. The film was a success, which led to him co-directing three more films with Vamanrao N Bhatt, namely Satteche Prayog (1935), Thakicha Lagna (1935) and Pundalik (1936). He went to study filmmaking in the UK and upon his return, joined Prabhat Film Company to script V Shantaram's Shejari/ Padosi (1941). He directed films like Pahila Palna (1942), and Nagad Narayan (1943), before scripting Gajanan Jagirdar’s Ramshastri (1944). The film was later edited as a children’s film and released under his name. Pahila Palna was a comedy starring Shanta Hublikar which was also the debut of G D Madgulkar as a lyricist. In 1945, he made Lakhrani which saw the debut of Guru Dutt in a minor role. During this period he mainly worked for New Huns Pictures, Famous Pictures and Minerva Movietone. He directed a documentary on Lokmanya Tilak in 1951. Joining hands with V Shantaram again in 1951, he wrote Amar Bhoopali. Another interesting turn in his career came when he directed Rustom Sohrab (1963) which was scripted by Kumar Ramsay, who would later become famous for his horror films. He also directed Ek Nanhi Munni Ladki Thi (1970) for the Ramsay brothers.

He was influenced by the modernist style of K Narayan Kale in his works. In 1938, he married Malati Bedekar, one of the earliest feminist writers in Marathi literature. His autobiography Ek Jhaad Ani Don Pakshi was published in 1985. He breathed his last on 30 October, 1998 in Pune.