On a Starry Trek 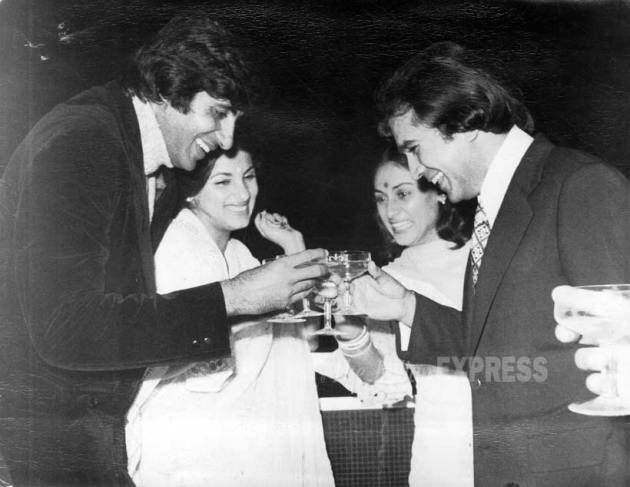 Stars are born wherever films are made and shown and that means all over the civilised world. Not just Hollywood or India but even in countries which can only boast of minuscule film industries. Stardom, as Alexander Walker observes in his excellent study of the star phenomenon in Hollywood is a characteristic of film industries the world over. In fact, the star is the lifeblood of any commercial film industry since it is on his charisma that a film does business at the box office.

Inspite of this, one would find it difficult to define what star charisma is or what actually makes a star. Good looks?

Neither Rajesh Khanna nor Amitabh Bachchan is conventionally handsome and there are dozens of leading men (lesser starts) who are far more physically attractive and yet both have occupied the top position in the Indian film industry at different times. Acting talent? Dev Anand is not a particularly good actor but he has remained a major star for over four decades. What then makes a star? What is that extra ingredient called star charisma that differentiates a star from an ordinary person?

A star is not necessarily a good actor, in fact, one could go a little further and say that a god actor will rarely make a star (Sanjeev Kumar's is a case in point) because, in order to satisfy the dictates of the audience and their fans, stars must by necessity play the same character again and again... ad nauseum. A star cannot be too versatile for the audience wants (in fact desires) to see him in the role that made the star popular: witness Dilip the tragedian, Amitabh the rabble-rousing anti-establishment hero, and Dharmendra the tough man with a soft exterior.

But then, again, the audience also tires of repetitiveness (witness Amitabh's innumerable flops in the early EIGHTIES) And so, it is the wise
star (like Dilip Kumar) who can ration himself out in small doses enough to keep the audiences happy but not enough to tire them out. Accepting roles which are familiar enough to tickle their sense of deja vu and yet different enough to keep them in the theatres (Manmohan Desai the filmmaker has exhibited some such 'Star' sense in his last few films, all of them super-duper hits).


"Behind the star system, there is not only the 'stupidity' of fanatics, the lack of invention of screenwriters, the commercial chicanery of producers. There is the world's heart and there is love, another kind of nonsense, another profound humanity".
-Edgar Morin in his classic study THE STARS

Often audiences demand that a star repeat his real-life role on the screen, but often they demand that the star repeat his on-screen role in real life. The disappointment and rejection that are engendered can be seen in the case of Priya Tendulkar who refused to be a real-life Rajani (the consumer activist character she plays on TV). And, of course, there are occasions when individual roles supersede star persons as happened in the case of Vishnupant Pagnis in Sant Tukaram (1936) and Nargis in Mother India (1957). So closely were they identified with these roles that the shadow of the role chased them all through their acting careers.

But it is not only the actors that star images affect, they affect audiences too. Since star cinema (or mainstream commercial cinema) depends largely on creating a strong identification between the star and the audience, the latter begins to see things from the former's point of view and at least for the duration of the film, begins to live his life vicariously.

The salaries of top stars and those of lesser-known artists were not as great as it would be in later years. The early years of the forties saw a tremendous spurt in industrial activity in India, accompanied by the scarcities brought on by the ongoing Second World War, all of which resulted in speculative activity. Fortunes were made in the black market. The huge profits made from underhand activity created a new kind of market situation where money had to be re-invested in profitable business without it showing up in the account books. And where else but in the film industry could one make a 'killing' almost overnight.

"The star system met with great success in the abnormally strained atmosphere of the war. It grew in size and in the huge deluge that it produced, the producer, the technicians the writer and the others were washed away".

-Kanan Devi in Indian Talkie 1931-56
Star salaries shot up phenomenally from Rs. 20,000 a film to Rs. 75,000 a film and even Rs. 2,00,000 a film. Consequently, film budgets too shot
up from the pre-War average of Rs. 90,000 to around Rs. 5,00,000. Most of these transactions were in black and as Eric Barnouw and S. Krishnaswamy note in Indian Film: "To receive part of one's salary in black was a badge of distinction (which) contributed to the star's prestige and bargaining power."

Though the film industry in India has always been male-dominated, ironically enough, the first film favorites were all actresses. Thanks to the stigma attached to appearing in films, no Indian woman from a well-to-do family would come forward to act in them. Producers perforce had to rely on Anglo-Indian girls who had no such qualms. Sita Devi (Renee Smith), Savita Devi (Irish Gasper), Madhuri (Beryl Claessen), Manorama (Sinnie Stewart) and Sulochana (Ruby Meyers), who was the highest-paid star of her time were all Anglo-Indian girls most of them whom faded away with the coming sound since none of them knew the local language.

The talkies saw the debut of a number of Indian girls from respected families among them Enakshi Rama Rao, Durga Khote, Leela Chitnis and Devika Rani. As far as possible, studios saw to it that stars were at least well educated, if not graduates. Ashok Kumar, Mubarak, Nayampally, Motilal, Prithviraj Kapoor and Surendra were all educated, urbane and sophisticated. Gone were the pahelwans of the earlier silent era and in their place came the University graduates. This trend which was intentional since the industry was hell-bent on acquiring a good image for itself, continued into the forties which saw the rise of Dilip Kumar, Dev Anand and Raj Kapoor-three stars who were to reign supreme for the next 25 years.

With the coming of Nargis, Meena Kumari, Nutan, Waheeda Rehman and Sinha are forever poised on the verge of taking the plunge.

Of course, very much in the limelight are the three debutant MPs: Sunil Dutt, Vyjayanthimala and Amitabh Bachchan (listed here in order of seniority) who also are influential stars in the film industry, with the exception of Vyjayanthimala who retired from an active film career nearly a decade ago. The other two are still very active film stars with Amitabh at the top. While Amitabh's entry into politics can be explained away by his nearness to the Nehru-Gandhi family (he is a personal friend of Rajiv Gandhi), how does one explain the sudden influx of film stars in politics?

Of course, film stars taking to politics is not a new trend because both M.G. Ramachandran (in Tamil Nadu) and N.T. Rama Rao (in Andhra Pradesh) have shown that film stars, too, can be successful politicians. From the very start, M.G.R.'s rough and ready films have formed a platform for the Dravida Munnetra Kazhagam philosophy. In fact, in spite of the veneer of commercialism in M.G.R.'s films, they have always been political instruments for social change. All through his career as a film star, M.G.R. has used his star charisma to reach out to the masses and propound a political message, the message of the D.M.K.
"You see certain people who carry the centre of the stage with them, even when they are doing nothing. Sometimes it is a physical thing. Sometimes it really is an intensity inside. Often it is the way the light hits the eys. They are born to be creatures of the camera. "
- George Cukor

Of course, snide whispers have also suggested that turning to politics is merely a pretext to ensure alternative careers in the face of fading star charismas. There may, of course, be a limited truth in this because the option for ageing stars may be to retire gracefully or take to character acting...noting, of course, that no star, with the exception of Ashok Kumar and Dilip Kumar, has survived this transition effectively. But then, this is not the whole truth because Indian stars-turned-politicians have proved that their star charismas are still intact, if not enhanced.

IN SEARCH OF NEW PASTURES

Of late, particularly in the last couple of years, Indian stars have begun to make deep inroads into the seemingly impenetrable international film scene. Thanks for this largely due to the large numbers of Western film-makers had no recourse but to shoot in India with the help of Indian technicians and actors.

The country soon began to crawl with foreign producers wanting to make films, television serials and even short films, Octopussy, Mountbatten, The Jewel In The Crown, Staying on, A Passage to India. One film followed another and Indian actors got parts in these films- small ones at first and then the big ones later.  With as many as 18 feature films and television serials shot in India in the last three years, it was inevitable that a wide range of Indian artistes be discovered.

"....with critical and financial success of Gandhi, the West has begun to recognise the Bombay movie industry." -Phillip Smith, American film critic

Ofcourse, the battle is only half won since Indian actors are still not considered for all the Indian roles in spite of Victor Bannerjee having proved his mettle in A Passage to India. In the very same film, the roles of Dr. Godbole was played by the noted Alec Guinness when it could very well have been done by someone like Dr Shreeram Lagoo. Even in A Jewel In The Crown the role of Ashok is played by a Pakistani settled in the West for the last many years. Indian actors in foreign films are not a recent phenomenon because quite a few of the Indian stars have played important roles in foreign film in the past.

But none of these actors, with the exception of Shashi Kapoor and to a certain extent I.S. Johar made any great impact or lasting impression on the minds of Western audiences or for that matter filmmakers.

Consequently, they were not cast further in other non-Indian roles. Even Kabir Bedi who has stationed himself at a vantage point in Hollywood says that he is at best a major contender for the non-American roles and that he can never hope to have a film revolve around him Ditto for Persis Kahambatta though she managed to bag quite a few non-Indian roles. What our stars now need is a Godfather to propel them further, someone who would do what David Lean did for Omar Sharif.

This article was original published in the Indian Cinema journal 1985. The images used in the feature were taken from Bunny Reuben's book Follywood Flashback and the internet.
630 views