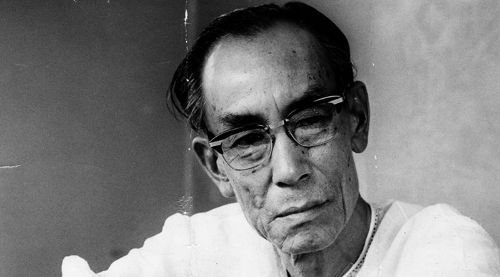 An image of S D Burman from Cinemaazi archive

When you think about the revival of vintage Hindi film music, chances of R D Burman making the cut are high.

Yet, the one music composer form the true golden era of Hindi film music who is enjoying an unlikely revival in this day and age seems to be the elder Burman. Thanks to products such as SareGaMa’s Caravaan, the audio-player which has over 5000 Hindi film classics pre-loaded and a brand new biography (the third one in just six years), a new generation is slowly discovering 'the father of R.D.' and one of the true all-time greats of Hindi cinema.


There is a popular belief that the present crop of fans of Hindi film music might not be able to appreciate the doyens of the golden era, and in a way, it’s true. The sound of songs in Hindi films has changed so much over the last decade and a half that anything that transcends this period is instantly bracketed as old and antiquated. Considering the fact that nearly 65% of India’s population is under the age of 25, songs from films such as Mr. India (1987), Khudgarz (1987) and the likes are classic enough to be reimagined and music from the early 1980s — such as songs from films like Kaalia (1981) or Kudrat (1981) — are vintage. In this light, anything before the mid-1970s is truly old and the only way today's music lovers could be introduced is via a remix like Shaitaan’s (2011) remix of Khoya khoya chand from the Dev Anand-Waheeda Rehman starrer Kala Bazaar(1960) or Dev Benegal’s Road, Movie (2009), which featured a jazzed-up rendition of Tel maalish from Pyaasa (1957). Intriguingly enough, both songs were originally composed by SD Burman and keeping in mind the fact that Dada Burman died more than four decades ago, it’s indeed a surprise that he is enjoying such a resurrection.                                                                   Another one of S D Burman's melodious composition from the film Bombai Ka Babu (1960)

In an industry where collaborations and creative partnerships are worth their weight in gold, S.D. enjoyed a great association with not just lyricists and singers but also filmmakers. He was a preferred favourite of Dev Anand and enjoyed a fantastic association with Sahir Ludhianvi before the poet demanded one rupee more than S.D. as he felt that it was the songwriter who made all the difference. Burman was also one of the first composers in the Hindi film industry to compose a tune and then get the words written to suit it, something that Sahir could never come to terms with. Dada Burman was the one who truly gave Kishore Kumar a chance to shine as a singer and later in 1969, Kumar truly arrived as a playback singer under him in Aradhana.
Sar Jo Tera Chakraye was composed by S D Burman for Guru Dutt's Pyaasa. It  got a new rendition in the 2009 film Road, Movie

When it comes to chronicling the golden past of Hindi films in terms of books, few have come close to S.D. Burman. Although it was an R.D. Burman biography — R. D. Burman - The Man, The Music by Anirudha Bhattacharjee and Balaji Vittal — that changed the perception about film biographies being a sound investment by publishers, there hasn’t been anyone as attractive as S.D. when it comes to biographies. The last six years have witnessed a surge of books on the maestro and in an industry where the market not being big enough to sustain two books on someone as contemporary as Priyanka Chopra, there have been three books on S.D. Burman - Sathya Sarna’s Sun Mere Bandhu Re, Khagesh Dev Burman’s S. D Burman The World of His Music and the recently released S. D. Burman: The Prince-Musician by Anirudha Bhattacharjee and Balaji Vittal. In fact, the manner in which the three address the persona of S.D., one wouldn’t be surprised if there is one more in some years from now.

So, what is it about S.D. Burman that makes him so enduring? What could possibly contribute to the fact that Dada Burman continues to shine across decades? Simply put, it’s the manner in which he composed his songs — the sheer simplicity of the arrangement and the focus on the melody — that remains the yardstick by which the longevity of any song is measured in Hindi films. One wouldn’t be incorrect to say that S.D. Burman never traded the basic principles and as a result, his sound is still relevant, which more than settles the debate on why a music composer who died 43-years ago continues to hit the right notes.

Cinemaazi thanks Gautam Chintamani for contributing this article which was originally published in Firstpost on 1 October 2018. The images used were not part of the original article. https://www.firstpost.com/entertainment/the-cult-of-sd-burman-why-the-legendary-composers-music-is-still-relevant-43-years-after-his-death-5295411.html
1135 views