For the first time  in  the history  of  motion  pictures  in  India  or anywhere in the  world,  a  grandfather,  father,  son  and  his  fiancee  have  been  called  upon to play their 'real life' roles on the  screen  in  R. K. Films'  new  offering  "Kal Aaj Aur Kal". As far  as  any  film  historian  knows,  there  is  no  other  precedent  of this kind
True, there are many examples of brothers working together.  In India, we have Dilip and Nasir; Sanjay and Feroz; Ashok, Anoop and Kishore working in films as brothers.

There also have been examples of father and son. Prithviraj and Raj; AshokKumar and his son; Prithviraj and Shammi Kapoor, working; as father and son in a picture. Why, in "Awara", the four generations  of Kapoor family appeared in the  film, viz  Randhir  Kapoor  in  the title  shot,  Shashi as the kid and Raj Kapoor as the grown-up Raju, Prithviraj as his father and Dewan Bisheshar Nath, Prithviraj's  father,  as a judge. In Hollywood, Lionel and John Barrymore and their sister Ethel Barrymore have appeared together in one picture.

But, as affirmed above, "Kal Aaj Aur Kal'', the first motion picture in which Prithviraj Kapoor, Raj Kapoor and  Randhir  Kapoor, grandfather, father and grandson in real life have been assigned identical roles in the picture. What is more, Babita who is now marrying Randhir is playing the role of his fiancee in the film.

Thus we have members of one family enacting their real life-like roles on the screen.  This  unique casting has a great advantage; for it creates an air of authenticity and leads  a  note  of  realism  to  the  entire  proceedings,  while working i n the film,  the  artistes  did  not  have  to  pretend  or  put  in  false  airs. Raj Kapoor, who is playing the role of a father on the screen does not have to pretend. His talk with son Randhir appears as natural as Prithviraj's dialogues with his own grandson. Even the romantic scenes between Babita and Randhir appear much more natural than they would have been otherwise.

Though originally perhaps Virendra Sinha did not have these artistes in mind when he wrote the story of "Kal Aaj Aur Kal", he has reason to be very happy with the perfect casting of real grandfather, father and son, around whom the story revolves, in the identical roles lending an air of genuineness to the conflict between generations which provides the dramatic motif of the story.

Prithviraj is cast as the aristocratic grandfather who believes in the old ways of life and has orthodox outlook. Randhir Kapoor is cast as the grandson educated in England who holds dramatically opposite Westernised views of life and is ready to revolt. Raj Kapoor is cast as the father of today sandwiched between the two generations.  As  a son, he  does not  have  the  courage to oppose his father; as a father  he  is  afraid  to  hurt  his  son's  feelings  lest  he  may  revolt and walk out of home. It is his job to strike a balance between the adamant 'Yesterday' as represented by his father and rebellious 'Tomorrow' as represented by his son. And it is these significant roles representing three different generations which represent 'Yesterday, Today and Tomorrow' that the three generations of Kapoor - viz.  Prithviraj, Raj and Randhir portray on the screen.

Babita portrays the modern girl who chooses her own life partner and in doing so she has to confront the pride and prejudices of the old generation. She portrays it without rancour and with full faith in the youth who is ready to stand by her and stake everything for her.

"Kal Aaj Aur Kal" is thus a unique casting feat and it will be a treat to watch the four artistes playing their real-life roles on the screen. 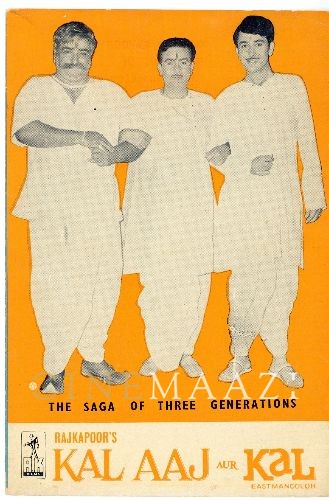