When Javed, the only son of Judge Shakir Hussain, was three years old, his mother promised to her sister who was on death bed that she will get her son Javed's marriage with her daughter Najma. When Javed entered in youth after completion his graduation, his mother explained him about the fulfillment of her promise with her deceased sister.

But Javed astonished.... One side there was duty and love, and on the other side there was question of Javed's whole life. After great thought Javed suggested to his parents that he will go to Bombay to find out about the nature and character of Najma with whom his parents wanted to marry him. Javed promised to mother, if Najma will possess high character, he will have no objection to marry her.

With the permission of his parents, Javed went to Bombay where incidentally met with his childhood friend Chhote. Both Javed and Chhote started secret enquiries about the nature and character of Najma. During the process Najma came to know that Javed is the same young boy with whom she was engaged in childhood.

On the other side Anwar, a bad character young boy, was fond of innocent young girls to get them spoiled. Salma, the cousin sister of Najma got entangled in love affairs with Anwar, and thus Salma wrote few romantic letters to Anwar, considering him a decent and good character boy. But when Salma came to know about the reality of Anwar's character, she disconnected her relation with Anwar and got herself married to another young gentle boy. On the strength of those romantic letters which Anwar possessed, he started black-mailing Salma. But to save Salma's respect in the eyes of her husband, Najma took all the responsibilities to get those letters back from Anwar. But Anwar took mis-advantage and started black-mailing Najma also.

One day when Javed saw Najma talking to Anwar secretly, he suspected about Najma's characted about Najma's character, but when Najma disclosed the reality and truth, Javed and Chhote promised to get those romantic letters of Salma back from Anwar at any cost. Javed and Chhote started efforts and they succeeded and made Anwar worry on his failure in his mission. Anwar planned to take revenge from Javed with the help of a goonda named Dilawar. Javed was trapped. A tough fight started between Javed and Anwar. During the tussle Anwar was shot dead and unluckily Javed was caught red handed by the police on the charge of a murder. A case against Javed was started in the court. But mother of Javed, who was sure that her son Javed cannot be a murderer and treats him an innocent, started praying at the dargah of "Khwaja Gharib Nawaz" for the release of her son Javed from the charge of murder.

Did Javed get free respectfully from the murder charge?

Did Javed and Najma get married?

To get reply of all these questions, you must see Producer/Director G. Ishwar's "MERA SALAAM".

"Mera Salaam" is a picture with social, romantic and musical convincing theme - it is must for you and your family. 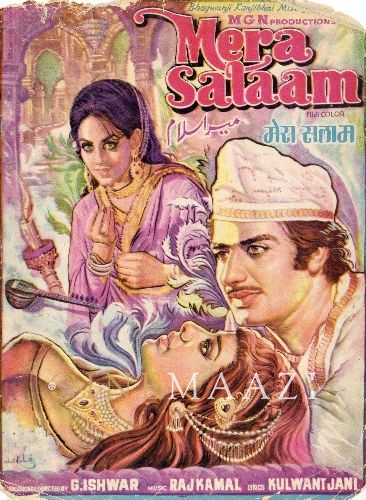