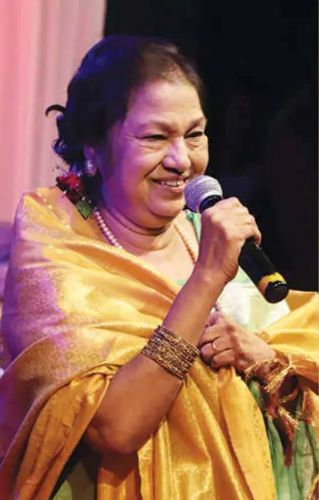 Born on 8 October, 1948 in Nagpur, where her father used to work for the CBI, Usha Timothy grew up in a musically-inclined family. Her elder brother Madhusudan was a well-known violinist with All India Radio and her cousin Vasant Timothy also a keen violinist and used to teach music at the Khairagarh University in Madhya Pradesh. Growing up, she loved listening to the songs of Mohammed Rafi and Lata Mangeshkar on the radio, singing along, although she was yet to begin her formal music training.

She was just 13 when she was discovered by music composer Pandit Shivram, who gave her, her first break with Durga Pooja (1962). She rendered a Sanskrit shloka of 60 lines in the film that was produced and directed by Adarsh. She was noticed with her second song, scored by music composer duo Kalyanji-Anandji who assigned her the singing of Tu raat khadi thi chhat pe for the film Himalay Ki God Mein (1965). The song was a duet with Rafi, and became considerably popular at the time.

Interestingly, Usha Timothy’s career in music began at age 7. Her brother Madhusudan was involved in the organising of the Kalyanji-Anandji night which took place in Nagpur in 1956-57. While big names from the world of film music such as Mohammed Rafi, Mukesh, Manna Dey and Hemant Kumar had arrived at Nagpur to perform, as luck would have it, no female singer was available for the event. At this point, Madhusudan recommended his sister’s name to Kalyanji-Anandji. The famous music director duo dismissed the idea on learning Usha’s age. However, at Madhusudan’s behest, Usha stood on stage during the interval and rendered Rasik balma from the film Chori Chori (1956). The young girl sang minus orchestra, yet left such an impact, that requests for songs poured in. An impressed Kalyanji-Anandji thereafter included her in their troupe, and Usha went on to perform regularly in the various programmes of the group in Bombay and other cities. She became popular as Baby Usha Timothy, going on to also perform with the music troupes of Mohammed Rafi, Mukesh, C Ramchandra, and Hawaiian guitarist Sardar Hazara Singh.

She began her formal training in music at the age of 11, learning classical vocal from Pandit Lakshman Prasad of Jaipur. She also started training in tappas and thumris from Nirmala Devi, as well as classical singing training from Pandit Shivram. From none less than Rafi she learnt the art of breath control and the ability to understand the feelings and emotions inherent in songs, and to enact them while singing. As their singing range matched considerably, she was often recommended by Rafi to composers.

Besides Hindi, Usha Timothy also went on to sing songs in languages such as Bhojpuri, Marathi, Punjabi, and Malayalam. While her major body of work was with Kalyanji Anandji, she sang for various composers. Interestingly, Usha Timothy is said to have initially rendered the famous Pradeep song, Aye mere watan ke logon, scored by C Ramchandra, during a live performance at the latter’s show. The popular patriotic song went on to be rendered by Lata Mangeshkar.

In the course of her career, Usha Timothy bagged the Sur Singar award for ghazal singing, and the Cine Music Directors’ Association award for Tu raat khadi thi chat pe, along with Rafi. She also won the Murphy Saigal contest, and the Mohammad Rafi and Kishore Kumar Awards.