Absconding from the Vijay Garh Jail, a convict Mr. Murder took shelter in the house of a woman Savitri, whose husband was missing for last seven years Savitri's son Munna who never saw his father before, took to understanding that this man Mr. Murder is his father Savitri as she was helpless, couldn't expose neither to her blind father-in-law nor to her child that this fellow in fact is a dangerous murderer and not her husband.

C.I.D. office Rajan had all doubts on internationally-known crime writer Mr. Day being so called Mr. Murder. So he one day invited Mr. Day and his family for a tea party at his home. Mr. Day arrived at the scheduled time but alone. As soon as he entered the room, the scene took a sudden change - Savitir and Munna emerged from the adjacent room and Munna addressing him "Father! Father!!" clasped him by his arms. Obviously enough it was established that Mr. Murder and Mr. Day are the two names of the same person.

No sooner the I.G. of police Mr. Tiwari gave signal to the hidden police officers, Mr. Day almost with the quickness of a tiger took leap through the window and disappeared.

Rajan, Mr. Tiwari, Savitri, Munna and all the officers were left disoriented and perplexed and in the meanwhile Mr. Day dressed superbly entered the room with a smile accompanied by his wife Laxmi and sister-in-law Nita. "What is this..........? and who was the then..........?"

Rajan immediately followed the former - and caught him of course - but dead - he approached the dead body - "Oh! what's this?" - he was in a fix - "how it could happen?"

Then Rajan played a Ruse - he made a false announcement that the man concerned has been caught alive - but this announcement unfortunately enough put him and his beloved Nita in a mess.

Nita disappeared from Mr. Day's residence and Rajan receive a card from Mr. Murder - "if that man want be released you want see Nita again".

"What happened later" can be known if you plan a personal meeting with Mr. Murder.

"But where to find Mr. Murder?"

Don't you worry senor !, Very soon Bundel Khand Flims' "Mr. Murder" will appear in several corners of the globe at the same time during his stormy voyage - but beware ! If you are murderer or you ever got a Murder done keep ready to pay the Murder - Tax of "Mr. Murder" - he is fast approaching you. 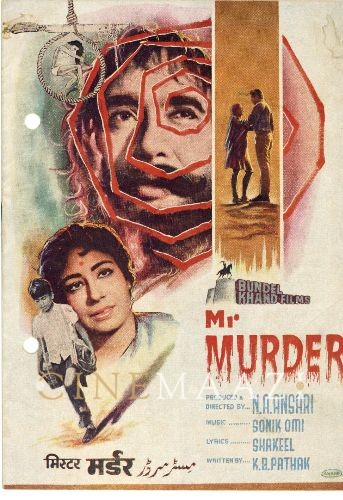