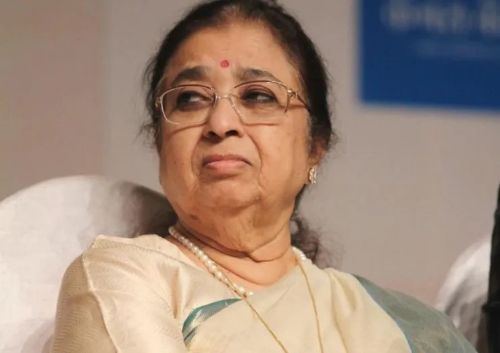 Singer Usha Mangeshkar is strongly identified as the irreplaceable voice of Goddess Santoshi Maa, with her voice working particularly well for large religious gatherings. Besides the devotional favourite Main toh aarti utarun re from the film Jai Santoshi Maa (1975), she has popular solo songs such as Mungda from Inkaar (1977) and Humse nazar toh milao from Ikraar (1979) to her credit. Sister of leading singers Lata Mangeshkar and Asha Bhosle, her popular duets include Aplam chaplam chaplai re from Azad (1955) with Lata, O albele panchhi from Devdas (1955) with Asha, O meri maina from Pyar Kiye Ja (1966) with Manna Dey, and Shaam rangeen hui hai from Kanoon Aur Mujrim (1981) with Suresh Wadkar. Singing in multiple languages such as Bengali, Gujarati, Kannada, Bhojpuri and Nepali; she enjoyed exceptional success in Marathi songs both film music and private albums. Along with her brother Hridaynath Mangeshkar, she also produced the Marathi film Jait Re Jait (1977).

Born on 15 December, 1935, she was the fourth of five siblings including Lata Mangeshkar, Asha Bhosle, Meena Khadikar, and Hridaynath Mangeshkar. Born into the first family of Hindi film music, her sisters would rule the Indian music industry for several decades. That said, she managed to carve a niche for herself through her talent and sheer hard work. Having recieved formal training under Ustad Amanat Ali Khan and Ustad Aman Ali Khan, her voice sounded similar to Lata’s, as can be discerned in the song Ankhon mein surma daal from Rani Roopmati (1959).

It was with the mythological film Jai Santoshi Maa in 1975, that she truly made an impact. A small-budget film, its filmmaker could not afford the fees of the reigning popular singers to render the famous bhajans penned by Kavi Pradeep. Usha was roped in to give playback for the film and  the songs went on to become her most popular work. She became irrevocably linked as the voice of Goddess Santoshi Maa. When the film was remade in 2006, her voice was retained for the same songs.

There is a school of thought that opines that had Usha not been a Mangeshkar, she might have fared much better in her career. There would have been no constant comparison to her siblings, which might have given her greater self-confidence. However, it can also be argued that being a sibling of the famous singer sisters actually helped her. Her repertoire also consists of several duets, many of which are with her sisters, who invariably sang for the main female lead. She also got the occasional opportunity to render duets with other singers for the main lead; however, they were invariably for low-budget films. In big banners, she mostly sang duets for the side heroine, even having trios and quadruples with other singers.

Perhaps her most famous Hindi film duet is Aplam chaplam chaplai re from the film Azad (1955) with Lata. The song set the trend for many dance numbers during the era. Another duet with Lata,Tum ko piya dil diya from Shikari (1963) became the most celebrated song from the film and still retains its popularity.

By the time she rendered the comic song O meri maina with Manna Dey, a discernable change could be noticed in her voice quality. In full-throated songs, her voice developed an edge, becoming shrill, piercing and naturally loud. This voice timbre would come to her advantage in Jai Santoshi Maa and some other films.

Her other duet with Asha - Chhuk chhuk chak chak from Rafoo Chakkar (1975) became a sensation, with Rishi Kapoor dressed as a woman dancing in a train. Another delightful duet was Shaam rangeen hui hai from Kanoon Aur Mujrim (1981) with Suresh Wadkar. Composed by C Arjun, who also was the music director of Jai Santoshi Maa, he used the softer side of her voice to produce this gem. It was clear that she could also sound dulcet if the song was suitably composed.

She did have a few memorable solo numbers too. Her first Hindi film song — Bhabhi aayi bhabhi aayi from Subah Ka Tara (1954) was filmed on a child. Exuding innocence was her solo number Chachi akad gayi from Panchayat (1958), which was also filmed on a child. Though she had got off to a good start, A-grade films proved difficult to conquer. As a result, she started accepting songs for B-grade films, and got typecast.

She did manage to leave her mark even in low budget films. Among the songs that music director Chitragupt offered her over the years, mainly in B-grade films and mythologicals, are the delightful Thandi hawaon kali ghataon from Zimbo Comes to Town (1960), and Lage nahi mora jiya from Banarasi Thug (1962). Her voice revealed a depth of emotions in Mere mehbbob sun from Bhootnath (1963), while she also got the opportunity to sing for the main lead, Mala Sinha, in Yeh aaj kal ke ladke from Dillagi (1966). Her classical training stood her in good stead for her rendering of the Jaidev-composed semi-classical song Sanjh bhayi jhanjh bhed jiyara ke from Sapna (1969). Similarly, she vindicated noted music composer S D Burman’s trust in her with her rendition of Mero toh Giridhar Gopal from Phagun (1973).

Amidst her many numbers, it was the boisterous Mungda, composed by Rajesh Roshan that brought her immense fame. Picturised on Helen, Usha had apparently helped lyricist Majrooh Sultanpuri with the Marathi words for the song. Having previously worked with Rajesh Roshan in films like Julie in which she had a duet with Asha, as well as Khatta Meetha (1978) and Hamari Bahu Alka (1982). Not limited only to bhajans, she has also sung a Mirza Ghalib ghazal, Yeh na thi hamari qismat from Main Nashe Main Hoon (1958).

She also went on to be nominated for Filmfare Awards thrice; namely for Main toh aarti from Jai Santoshi Maa (1976), Mungda from Inkaar (1978) and Humse nazar toh milao from Ikraar (1980).

While sustained success in Hindi films proved more elusive, she achieved greater popularity with Marathi songs with her song Var dhagala lagali kal being popular till date among the masses, with several remixes being made of the same.

Winner of the BFJA Awards for Best Female Playback Singer for Jai Santoshi Maa, she also won the Mirchi Awards 2020 for Lifetime Achievement, as well as the Maharashtra government’s Gan Samragni Lata Mangeshkar award for the year 2020-21.