During grim and dreary silence of the night, a dead body dropped down from a fast-running car on Road No. 303. Who was the murderer?

No one un-ravel the mystery: The police relentlessly endeavoured to track down the Murderer. The persons contacted and communicated with during the police investigation are listed as under..........

RAMESH     :    The elder brother of the deceased, who, full of effusive love for his brother, came to see his brother, instead received the sad news of demise

MUNNA    :     A notorious pick-pocket who from time to time helped RAMESH in tracking down the criminal.

SADHANA    :     A young homely looking and learned daughter of Seth DIN DAYAL, who inhabited the dream world of RAMESH.

SONA    :     Dancer of "REDLIGHT CAFE" who bartered away her heart and soul to RAMESH.

RITTA    :    Maid servant of Sadhana who had ear and confidence of her mistress.

A MYSTERIOUS MAN    :    Who robbed police, master, Sona and Ramesh of their peace of mind at single stretch

A leading and central character of the "RED CLUB" on whom the whole plot of the story is hinged.

Did the police succeed in apprehending the murderer? How did Ramesh wreak vengeance of his Brother's murderer?

Were Sadhana and Sona, involved in the "ETERNAL TRIANGLE" successful?

Who was the mysterious Man?

All these queries will be satisfactorily answered, moment the mystery of the "ROAD No. 303" is unraveled. 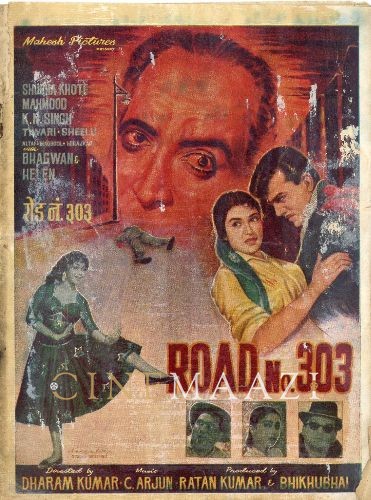