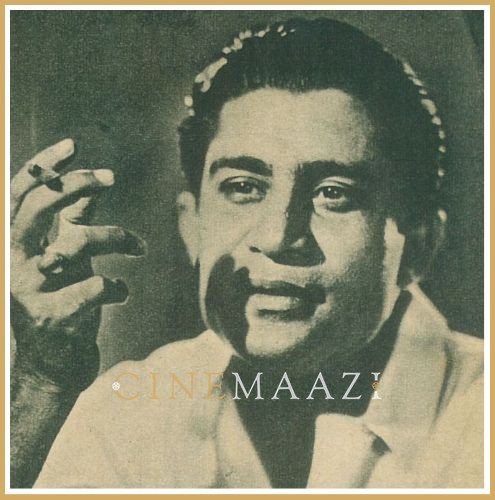 One of the most influential director-screenwriter and producer of his times, Amiya Chakrabarty was born into a Bengali family in Rangpur (present-day Bangladesh) in 1912. As a young boy, he was an actor and singer on stage. In the early 1930s, Amiya Chakrabarty became involved in the national movement for freedom. After the Dandi satyagraha, he was arrested and eventually forced to leave Bengal by 1935.

In Bombay, Amiya Chakrabarty joined Bombay Talkies, initially as Bengali tutor to the scenarist Niranjan Pal’s son. However, his talent for screenwriting shone when he was offered the chance to write the screenplay for Najmul Hasan Naqvi’s direction, Punarmilan (1940) along with Gyan Mukherjee. Released in the same year, his screenplay for Bandhan, starring Ashok Kumar and Leela Chitnis, carried the film to its status as one of the highest-grossing films of 1940. In 1941, Amiya Chakrabarty made his directorial debut with Anjan (1941), which brought back the popular lead pair of Ashok Kumar and Devika Rani, a staple of Bombay Talkies fare in its earlier phase. The film and its score by the classical flautist Pannalal Ghosh both proved to be quite popular. His next film was Basant (1942), featuring the child artist Baby Mumtaz, who later came to be known as the renowned actress Madhubala. A few years later, he also wrote the screenplay for the Jairaj-Leela Chitnis starrer, Char Ankhen (1944).

Meanwhile, in 1940, the founder of Bombay Talkies, Himanshu Rai passed away following a nervous breakdown. Devika Rani took over the studio in his stead, and due to disagreements regarding her preferred style of filmmaking, the studio was split into two camps, one led by Sashadhar Mukherjee, and the other by Amiya Chakrabarty. In 1942, Ashok Kumar and Sashadhar Mukherjee along with a few others left to form Filmistan. The massive success Bombay Talkies films enjoyed in this period was thus due in great part to the work of Amiya Chakrabarty, who quickly became the studio’s top director. He was also instrumental in introducing numerous famous actors to the industry including Dilip Kumar and Usha Kiron.

While Devika Rani and Amiya Chakrabarty were location hunting in Nainital, they had a chance meeting with a young Yusuf Khan. Impressed by his attractive physique, Devika Rani asked him to meet them in Bombay. Yusuf Khan turned up at Bombay Talkies a mere novice. He was so unaware of the film industry that he did not know the immensely successful Amiya Chakrabarty and had a short casual conversation with him when the director came to speak with him. A little while later, he was “in”. With his characteristic surety of judgement, Amiya Chakrabarty had spotted the hero for his next venture without even a screen test, and so Yusuf Khan, rechristened as Dilip Kumar, came to grace the Indian screen. The film he debuted in was the musical romance Jwar Bhata (1944).

Throughout his career, Dilip Kumar remembered Amiya Chakrabarty with great fondness. In a tribute to the filmmaker, he wrote of him as always mentally alert, full of life, and refreshingly aggressive. His brusque exterior, in Dilip Kumar’s experience, hid a very kind heart. According to Kumar, towards the end of the shooting of Jwar Bhata, when the studio was in a rush to complete the film, the hero fell ill with malaria. Seeing him running a high fever, Amiya Chakrabarty asked him to rest in a room upstairs in the studio, where he fell asleep. Dilip Kumar woke when it was just past midnight, only to see Chakrabarty spraying insecticide in the room, making as little noise as he could so as to not disturb the ill man. Amiya Chakrabarty and Dilip Kumar remained close all their lives, and when Chakrabarty formed his production company Mars & Movies, one of the most successful films made under the banner was the Dilip Kumar-Nimmi starrer Daag (1952).

Amiya Chakrabarty’s other notable films include Gauna (1950), Badal (1951), Patita (1953), Seema (1955), Kathputli (1957), and Dekh Kabira Roya (1957). Most of his films, though they followed a certain convention of filmmaking perfected at Bombay Talkies, dealt with social problems head-on. Daag, for instance, focused on the problems of alcoholism exacerbated by poverty, Patita follows the fate of a rape survivor, and Seema examines the travails of a juvenile delinquent. Featuring performances by actors of note like Usha Kiron, Balraj Sahni, Vyjayanthimala and Nutan, all of these films received praise. Seema was awarded the Filmfare Award for the Best Story in 1956.

Amiya Chakrabarty was married to Saraswati Shastri, also called Kamala, who was related by marriage to the sitar maestro Ravi Shankar.

A straightforward and individualistic man, Amiya Chakrabarty was incredibly dedicated to his work. As Dilip Kumar recalls, it was perhaps apt that he passed away on 6 March 1957 while still in harness, bringing a noteworthy career to an end.