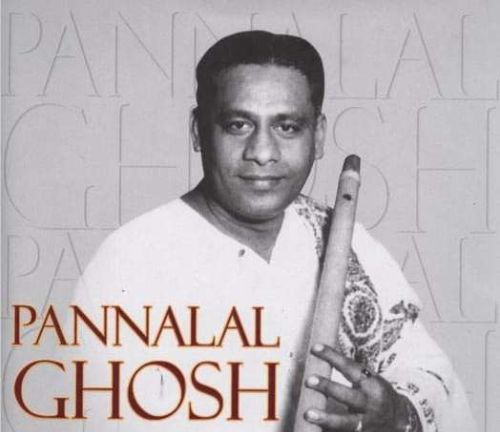 Pandit Pannalal Ghosh, considered as the pioneer of Hindustani classical flute music, was a noted bansuri player and composer. Trained in the sitar by his father, he focussed his attention on the flute by the time he was 18. Moving to Calcutta in search of a livelihood, he went on to assist in music production at New Theatres Ltd, after which he shifted to Bombay in 1940 for better prospects. Ghosh made his debut as independent music composer with Sneh Bandhan (1940), which included such popular songs as Aabroo ke kamaanon mein and Sneh bandhan mein bandhe hue. He also composed the background score for Aandhiyan (1952) along with Ustad Ali Akbar Khan and Pandit Ravi Shankar. His filmography as independent music director includes Anjan (1941), Basant (1942), Bhalai (1943), Duhai (1943), Sawaal (1943), Police (1944), Beesvi Sadi (1945), and Aadhar (1945). A disciple of Allauddin Khan, he is credited with popularising the flute as a concert instrument in Hindustani classical music. Pannalal Ghosh remains memorable for being the first to introduce the seven-hold flute.

Born on 24 July, 1911 in Barisal, Bengal Presidency, British India, he was named Amal Jyoti Ghosh. Son of a sitarist, Akshay Kumar Ghosh, and Sukumari from the Majumdar family of Dhaka, who was a gifted singer, Pannalal, as he was nicknamed, received his initial training in music from his father. Highly receptive, he absorbed good music from various sources. He was drawn to the flute as a child, trying to replicate the musical notes his father taught him on the sitar, on the small flute usually played by cowherds. At age 9, he is also said to have found a long bamboo pole that was part-flute while swimming in the waters of the Kirtankhola river, which he started practising on. Growing up, he also joined a gymnasium, learning martial arts, boxing and stick fighting.

Becoming a part of the Indian Independence Movement in 1928, he came under the scanner of the government and as a result, moved to Calcutta at age 17 to pursue a livelihood. He also studied the flute more deeply, concluding that the pitch and sonority of a bigger flute would be more appropriate for both classical and light music. Experimenting with various materials including metal and different types of wood, he decided on using bamboo and settled on a 32-inch-long flute.

An ardent devotee of Swami RamaKrishna Paramhansa, he was also influenced by Gurudev Rabindranath Tagore and Kazi Nazrul Islam. In Calcutta during the early 1930s, he received musical training for two years from noted harmonium player and master in classical music, Ustad Khushi Mohammed Khan, followed by Pandit Girija Shankar Chakraborty, and systematic lessons under the legendary Ustad Allaudin Khan Sahib, from 1947.

In Calcutta, owing to his childhood friend and brother-in-law Anil Biswas gaining employment as a singer with the Hindustan Recording Company, Pannalal played the bansuri or Indian flute for several recordings. Obtaining a contract from Ratneshwar Mukhopadhyay, his neighbour and a famous Kirtan singer, for an hour-and-a-half slot on the radio, Pannalal was noticed by well-known music directors such as Kamal Das Gupta, Ranjit Ray, Biren Das, Asit Baran, S.D. Burman, Subal Das Gupta and Himanshu Datta. His association with the rebel poet Kazi Nazrul Islam helped him get bigger contracts from leading recording companies HMV and Columbia.

Kazi Nazrul Islam, who had penned the lyrics for the film Pataalpuri (1935) directed by Priyanath Ganguly, was impressed by Pannalal’s flute recitals, and invited him to assist him in composing the music. Thus did Ghosh make his debut in the film world. He went on to be hired by New Theatres Studio as a member of their orchestra by Raichand Boral. Refining his skill as a flautist, both his salary and reputation at New Theatres grew considerably. He contributed to every film produced by New Theatres during the period 1934 - 1940. He also contributed to the introduction of playback recording and singing in Indian cinema, which is credited to R.C. Boral for the bilingual film Bhagyachakra (Bengali)/ Dhoop Chhaon (Hindi, 1935), an innovation achieved by sound engineer Mukul Bose.

It is believed that Pannalal Ghosh’s personality ensured he was more at home in the realm of classical music rather than film music.  Becoming the chief conductor and composer of the National Orchestra, he shifted to New Delhi in 1956.

Ghosh was the first to transform a tiny folk instrument to a novel bamboo flute 32 inches long with 7 holes, which was suitable for playing traditional Indian classical music. He uplifted its stature, bringing it at par with other classical music instruments. He is also credited with the creation of a special bass flute, and the introduction of the 6-stringed Tanpura, high-pitched Tanpuri and Surpeti into Hindustani music. Mastering the technique of presenting heavy melodies, balancing both beauty and grammar, his openness to accepting new ideas resulted in him creating or popularising several new or mixed ragas such as Andolika, Chandramouli, Noopur-Dhwani, and Ratna-Pushpika.

On the personal front, he was married to Parul Ghosh (née Biswas) in 1924, when she was 9 and he, 13. Parul was the younger sister of Ghosh’s friend Anil Biswas, who went on to become a famous music composer. She was a talented singer and later became a well-known playback singer, who also rendered many of Pannalal’s compositions. Ghosh’s daughter Shanti-Sudha was married to the flute player Devendra Mudeshwar, who was her father's disciple, while their son and Pannalal’s grandson Anand Murdeshwar also made a name as flute player till he passed away at a young age. Ghosh's younger brother, Nikhil Ghosh, was a noted tabla player and Padma Bhushan awardee, and also worked in films.

Pannalal was known to be an affectionate person and a man of few words. He adopted and supported several orphaned, poor and needy persons in spite of his own financial challenges. His humble and helpful nature made him popular amongst music connoisseurs as well as senior musicians.

Pannalal Ghosh passed away in Delhi on 20 April, 1960. He was 48. He left behind several disciples and followers of the Pannalal Ghosh School.