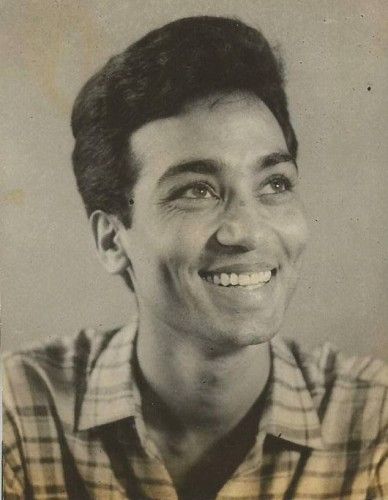 Born on 6 February, 1940 in Amritsar, Punjab, he grew up in a musically inclined family, considering his father Nathaa Singh was classical music professor. However, the latter was a strict teacher which is why young Bhupinder was eager to get away from vocal music and chose to play the Hawaiian guitar and the violin instead. Later, he would train in classical music under noted music experts. Early in life itself, he learnt to play the instrument of his choice. Alongside, his affinity for the ghazal saw him choosing poetry, composing it and performing it for his friends. Eventually, his love for this form of musical poetry would outlive his playback singing career.

His professional life as a singer and musician saw him moving to Delhi, where he joined All India Radio Delhi, and was also attached to the Delhi Doordarshan Centre. He won praise for his recording of poet Bahadurshah Zafar’s ghazal Lagata nahin hai ji mera ujade dayaar mein. His entry into playback singing occurred when he happened to perform a song at a gathering hosted by the then-producer of AIR, Satish Bhatia. Noted music director Madan Mohan, who was among the guests at the party, was pleased by his distinctive voice and offered him the opportunity to sing for his film, as part of a group song.

Interestingly, his debut in Hindi films came as an actor-singer in the film Haqeeqat (1964). Directed by Chetan Anand, he essayed a soldier, featuring in the well-appreciated song Hoke majboor mujhe usne bulaya hoga. As a first song, it was no mean break, considering he sang alongside veterans such as Mohammed Rafi, Manna Dey and Talat Mehmood, each singing an individual verse. He would later reveal that with just two microphones between the four singers during recording, he and Rafi shared one mic while Talat and Manna Dey shared the other. The three senior singers went out of their way to be encouraging to the young Bhupinder, and soothed his nervousness. He featured onscreen in the song as well.

He got his first break as a solo singer, featuring as actor-singer again in his next film, namely Chetan Anand’s Aakhri Khat (1966). He sang the Khayyam-composed moody club number Rut jawan jawan jawan raat meherbaan, which was also picturised on him. He also played the guitar in the song. The film, which marked the debut of would-be superstar Rajesh Khanna, captured the experiences of a 15-month-old infant in the city.

With making a mark as a playback singer proving to be a challenge amidst an already crowded space dominated by stalwarts like Rafi, Kishore Kumar, and Manna Dey, he opted to hone his skills as a guitarist. Absorbing as much as he could from the musicians and arrangers whom he came in contact with, his talent was further honed. Learning the finer points of the Spanish guitar from virtuoso Bhanu Gupta, who was also part of R D Burman’s team, he spent approximately two years mastering the instrument. Simultaneously, he grew his knowledge and expertise of other musical instruments as well.

His guitar-playing talent found recognition and opportunities flowed his way. Yet it was his collaboration with R D Burman that brought out the best in him. As Bhupinder would later share, in the early 1960s neither of them had much work and would just hang out together. The strong bond of friendship that developed between them later transformed into a working relationship that resulted in some of the most popular songs of Hindi films. With Burman giving him a free rein, Bhupinder created stunning guitar pieces in the former’s compositions. Their association began with Abhilasha (1968), followed by Parichay (1972) for which he sang the moving semi-classical number Beeti na bitaayi raina along with Lata Mangeshkar. His professional association and personal friendship with Burman was to endure more than 20 years, till the latter’s demise.

Being an integral part of R D Burman’s team, he nevertheless accepted requests to play guitar from other music directors as well. Raam-Laxman, Naushad and Sonik Omi were among the other composers he played for. If he played for music director Madan Mohan as seen in the popular song Tum jo mil gaye ho in Hanste Zakhm (1973), he also did so for Ustad Vilayat Khan for the song Ambar ki ek paak surahi in Kadambari (1976), and for the Khayyam-composed songs of Razia Sultan (1983).

As an instrumentalist, he created interesting variations as seen in the theme song of Pakeezah (1972) for which he played the 12-string guitar like the sarod, imparting it a classical sound. Similarly, the film Abdullah (1980) saw him play the oud—an Arabian stringed instrument—though he had never played it before.

It was the ghazal that was to prove his one true love. He had released private ghazal albums with HMV from 1965 itself, when the form was relatively unknown. Later, withdrawing from the film industry in the mid-1980s, he chose to focus only on ghazals. He would reveal that he didn’t leave Hindi film music because of lack of offers but because the music trends at the time did not suit his style nor his temperament. With songs in the 1980s losing their relevance and becoming just another aspect of a Hindi film, he could not reconcile with the lack of depth of lyrics and distanced himself from Hindi films. He went on to win acclaim in the realm of ghazals, achieving popularity for his beautiful compositions, rendered along with his wife Mitali Mukherjee. Their albums include Aarzoo, Chandani Raat, Gulmohar, Ghazal Ke Phool, and Ek Arzoo. His other albums include Surmayi Raat with Gulzar, Yaad-e-Mehboob with Jagjit Singh, Chitra Singh and others, and Meri Awaaz Hi Pehchan Hai with artistes like Lata Mangeshkar, Kishore Kumar, Mohammad Rafi and others.

On the personal front, he married Mitali Mukherjee, who was a well-known folk singer in her native Bangladesh. On a trip to Mumbai, being a fan of Bhupinder, she requested him to join her on stage. They discovered many commonalities including their love for good music, and decided to become companions for life, marrying in 1983.

He passed away due to suspected colon cancer and Covid-19-related complications at a Mumbai hospital on 18 July, 2022 at the age of 82 years.