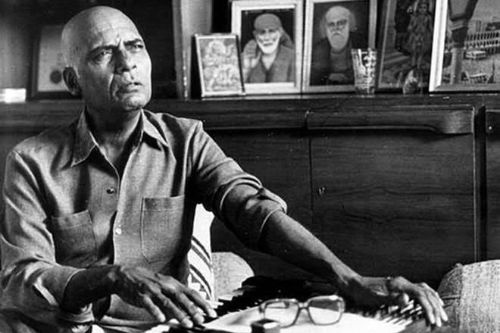 “Khayyam brings to mind the sensitivity of a poet, the focus of a sculptor and the quiet zeal of a painter,” music critic Monica Kar had thus summed up the veteran music composer

Mohammed Zayur Khayyam Hashmi, more famous mononymously as Khayyam. His long and illustrious career is studded with gems in classic films like Umrao Jaan (1981), Kabhi Kabhie (1976), and Razia Sultan (1983) that continue to be loved and admired. Winner of three Filmfare Awards, he was also honoured with the 2007 Sangeet Natak Akademi Award in Creative Music, and the third-highest civilian honour, Padma Bhushan, by the Government of India for 2011. Though Khayyam was active as a composer up until 2016, he composed only for a little over 50 films. The reason was, as he himself attested, that he didn’t want to compromise on quality. This made him the choice of discerning producers, as he produced songs that pleased both listeners and critics. Marked by minimal orchestration and simple tunes, yet infused with emotion, Khayyam’s signature was to turn poetry into film songs, using the music to make the lyrics come alive.

Born in Rahon near Jalandhar in undivided India on February 18, 1927, he fell under the spell of cinema and especially that of the quintessential actor-singer K L Saigal, whom he dreamed of being like. Exposed to literature, music,poetry and films via his father, his interest in pursuing his passion in cinema was however not appreciated. It led to him running away to his uncle’s home in Delhi at the age of 11. Under the guardianship of his uncle, Khayyam studied music for five years under Pandit Husnlal and Pandit Bhagat Ramunder. At 17, he travelled to Bombay to chase his dream; an unsuccessful trip, following which a friend introduced him to music composer Ghulam Ahmed Chisti – or Chisti Baba– in Lahore. Khayyam was hired as one of Chisti Baba’s assistants, arranging rehearsals for singers and musicians, in return for food and lodging but no salary. Burdened by the thought that he wasn’t earning and nor had he completed his education, Khayyam joined the Indian Army as a soldier in 1943. He went on to be posted in Lahore, Rawalpindi and Pune, where his singing talent won him much popularity. Post three years of service, he re-joined Chisti Baba again. On B R Chopra’s recommendation, he was now paid Rs.125 as a monthly salary. Realisation dawned that music could bring both respect and money. Visiting Bombay in January 1947, he reconnected with his gurus, Pandit Husnlal and Pandit Bhagat Ram, considered the first music director duo of films. He was assigned a playback song by his gurus, and teaming up with Rahman, who was also an assistant to Chisti Baba, they got their first break, composing music for Heer Ranjha(1948) under the pseudonym Sharmaji Vermaji.

Though Rahman chose to move to Pakistan, Khayyam continued to live in India post-Partition, composing music under the pseudonym Sharmaji for a few more films. He garnered attention for his ghazal Akele mein wo ghabratein to honge, which was rendered by Mohammed Rafi in Biwi (1950). When he was assigned the music for the Dilip Kumar-Meena Kumari starrer, Footpath (1953), he chose to use his own name, Khayyam, in the credits on the suggestion of his friends Majrooh Sultanpuri, Sardar Jafri and Chandulal Shah. The songs became instant hits, in particular, Shaam-e-gham ki qasam, aaj gham gin hain hum. The film’s songs showed the power of the composer in enhancing the poetry with music, while still retaining its original essence.

However, Khayyam wasn’t inundated by offers, mainly because he steered clear of flattery and didn’t try to cut out the competition. He would not even recommend his wife Jagjit Kaur to producers despite the fact that she had sung classics, such as Tum apna ranjo gham.In 1958, he was chosen by Raj Kapoor over the RK favourites Shankar-Jaikishan to compose the music for Phir Subah Hogi (1958), which had lyrics by Sahir Ludhianvi. The songs achieved popularity, in particular the title song Woh subah kabhi to aayegi rendered by Mukesh and Asha Bhosle, as well as Aasman pe hai khuda aur zameen pe hum and Chin-o-Arab humara. The songs gave Mukesh’s voice a new dimension, besides giving flow to the emotions contained in the scenario.Khayyam went on to score music for films like Lala Rukh (1958), Shola Aur Shabnam (1961) which had lyrics by Kaifi Azmi, Shagoon (1964) which had his wife Jagjit Kaur singing Tum apna Ranj-o-Gham and Tum chali jaogi, and the Chetan Anand-directed Aakhri Khat (1966). However, despite his excellent music, his work did not receive the fame it deserved largely because the films failed to become jubilee hits. In fact, when he was signed on by Yash Chopra for Kabhi Kabhie(1976), it was despite the fact that he was considered unlucky. The film was a sleeper hit, with its songs remaining memorable till date. Khayyam's versatility shone through in songs such as Kabhi kabhi mere dilmein khayal aatahai (rendered by Mukesh and Lata), Tere chehre se nazar nahin (by Kishore and Lata) and Main pal do pal ka shayar hoon (by Mukesh).

The end of the decade saw him composing in mainstream hits like Kaala Patthar (1979), Trishul (1978) and Noorie (1979) followed by the more offbeat Bazaar (1982), Thodi Si Bewafaai (1980), Dard (1981). Incidentally, he turned down the offer to compose for Silsila (1981) as he was uncomfortable with its extramarital affair theme. While it ended his professional association with Yash Chopra, they continued to remain personal friends. His best came with Muzaffar Ali’s Umrao Jaan (1981) in which he had Asha Bhosle croon evergreen hits like In aankhon ki masti ke, Ye kya jagah hai doston, and Dil cheez kya hai. Khayyam went on to compose music for Thodisi Bewafai, Dard (both 1981) and Dil-E-Nadaan (1982), all starring Rajesh Khanna in the lead. Khanna had been so impressed by his work in Kabhi Kabhie that he had gifted Khayyam one of his cars. Khayyam’s compositions for the Kamal Amrohi directed film Razia Sultan (1983) were another revelation, with his song Aye dil-e-nadan rendered by Lata considered a milestone. Bazaar (1982) is another gem crafted by Khayyam, including the song Dikhai diye yun ki bekhud kiya which is a veritable journey into a world of melody and poetry, as well as the Talat Aziz and Lata Mangeshkar duet, Phir chhidi raat bhar phoolon ki.

While Khayyam’s music had the touch of ghazals it was rooted in Indian classical music. Soulful, melodious and emotional compositions resulted in songs which were rich in poetry and purpose. Thus, they stood apart from the popular music of the day, which tended towards either semi-classical and ghazal or light and lively. Additionally, he paid close attention to detail. He was known to read the script to get the right mood in the music, absorb the lyrics and learn more about the characters who would sing the songs onscreen. He would also weave in regional folk songs in order to give an authentic feel of a particular region. He remains one of the few composers who created his compositions allotting the required respect to the lyrics, in the process enlarging the musical and lyrical canvas of the entire song.

Dabbling in non-film music, Khayyam composed songs like Paaonpadun tore Shyam, Brij mein laut chalo and Ghazab ki ya tere vaade pe aitbaar kiya. He also gave music for Meena Kumari's album, I Write, I Recite (1971) featuring nazms which she had both written and sung. Besides composing music for 10 television serials, he was also chosen by the government to compose two patriotic songs during the war with China. The songs were part of a documentary made by Mehboob Khan and were shown in film theatres across the country. He has to his credit over 200 non-film album titles in various styles including ghazals, bhajans, geet, and shabd.

Khayyam had married singer Jagjit Kaur in 1954, in one of the earliest inter-community marriages in the Indian film industry. He was known to discuss his compositions with his wife while in the working stages, and together examine if they were technically correct. He went to the extent of declaring that half of the credit for his songs belonged to his wife, and that he had once even proposed to compose music under the name ‘Khayyam Jagjit Kaur’, a proposal she turned down. The couple’s son, Pradeep died of a heart attack in 2012. On Khayyam’s 89th birthday, he announced the formation of a charitable trust, Khayyam Jagjeet Kaur KPG Charitable Trust, deciding to donate his entire wealth (Rs.10 crore at the time) to support budding artists and technicians in India.

Khayyam passed away after prolonged illnesses at 92, on 19 August, 2019. He was buried with full state honours.