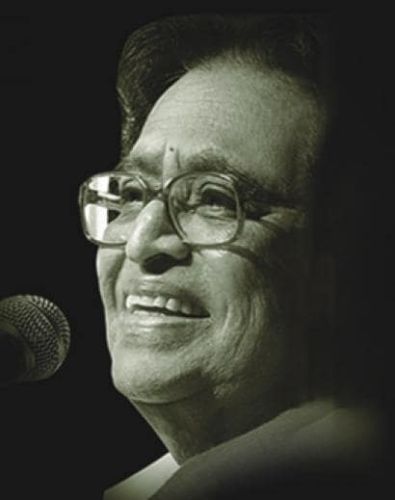 Renowned music composer and vocalist, Hridaynath Mangeshkar is the son of noted musician Deenanath Mangeshkar, and also the brother of famous vocalists, Lata Mangeshkar, Usha Mangeshkar, Meena Khadikar and Asha Bhosle. Popularly known as Balasaheb in the music and film industry, he has made a significant contribution to Hindi and Marathi cinema, in a career spanning over six decades. Instructed by greats such as Ustad Amir Khan, Pandit Ramprasad Sharma and Husnlal-Bhagatram in various musical traditions, Mangeshkar’s style was also influenced by folk music including Koli geet as well as the Bhakti and Sufi traditions. Among his most memorable compositions are Yeh aankhen dekh kar (Dhanwan, 1981), Yaara seeli seeli and Suramaee shaam is tarah aaye (Lekin, 1990). He was conferred with the prestigious Padma Shri in 2009, by the Government of India for his contribution to Indian cinema, as well as the National Award for Best Music Direction for Lekin (1990). He composed memorable scores in Hindi films including Harishchandra Taramati (1970), Prarthana (1969), Chaani (1977), Dhanwan (1981), Chakra (1981), Yash Chopra's Mashaal (1984), and Lal Salaam (2002), to name a few. He was bestowed the title ‘Pandit’ by the people of Maharashtra at the hands of Bhimsen Joshi and Jasraj, while the Shankaracharya conferred upon him the title Bhaav Gandharva.

Born on 26 October, 1937 into a family of musical legends, he was the son of renowned Natya Sangeet musician, Hindustani classical vocalist and Marathi theatre actor, Deenanath Mangeshkar and Shevanti Mangeshkar. The youngest of five children, including Lata Mangeshkar, Asha Bhosle, Meena Khadikar and Usha Mangeshkar, he received his musical training at a very young age. An erstwhile student of Ustad Amir Khan, he holds his sister and India’s Nightingale – Lata Mangeshkar, in high esteem.

Hridaynath made his debut in music with the Marathi film Akash Ganga (1955). He went on to compose for various Marathi films such as Ha Khel Savalyancha (1976), Chaani (1977), Jait Re Jait (1977), Janaki (1979), Sansar (1980), Umbartha (1982) and Nivdung (1989). Extremely selective about his work, he has only composed for 12 Marathi films. Equally particular about his work in Hindi films, Mangeshkar has gone on to create some unique and memorable music in Subah (the Hindi version of Umbartha), Lekin... (1990) and Maya Memsaab (1993). He also composed music for Doordarshan musical drama Phoolwanti (1992).

Hridaynath Mangeshkar developed a signature style of using complex meters with popular music traditions, as is seen in his composition of Vinayak Damodar Savarkar's poem, Saagara Pran Talamala. In order to be rendered correctly, his musical compositions required singers of considerable range and depth. His Dnyaneshwar Mauli, featuring compositions from Jñāneśvar, one of the most famous poets in Marathi literature, is considered to have set the benchmark for modern devotional music in Marathi. His collaborations with Marathi poets such as Shanta Shelke and Suresh Bhat have produced classic songs of immense popularity. Hridaynath is the first Indian composer to compose and release two entire albums featuring the poems and songs of poet-saint Meera, titled Chala Vahi Des and Meera Bhajans. He also composed and released an album, Meera Soor Kabeera, which features the works of Bhakti saints and mystic poets Meera, Kabir and Surdas. Another gem is his non-film masterpiece Ghalib. A music album featuring the ghazals of Mirza Ghalib, it is sung by the iconic Lata Mangeshkar.

Influenced by folk music, the Koli geet or fisherfolk songs composed by him are a reflection of the traditional rhythms of this music-loving ethnic community of the Konkan. His talent for the folk music genre was also seen in his compositions for Jait Re Jait, focusing on the Thakar community, which were well-appreciated.

Conferred with several awards over the course of his career, Hridaynath Mangeshkar has been the recipient of the prestigious National Award, the Lata Mangeshkar Award of Maharashtra state, seven Maharashtra State Awards for Best Vocalist and Music Director/Composer, and the Padma Shri by the Government of India in 2009.