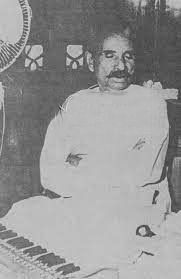 Hailing from Sujangadh in Rajasthan, a forefather of Jamal Sen was said to be a disciple of the legendary Tansen. Ingrained in the family tradition of music by his father Jeevan Sen, a court singer and an acknowledged Ustad, Jamal learnt to sing and play various musical instruments with finesse, especially the dholak, tabla and pakhawaj.

Sen began his career as a singer on AIR, Calcutta. He was among the first to sing Vande Mataram on radio. While in Lahore, Jamal Sen was introduced by music director Shyam Sunder to Master Ghulam Haider. This was the start of an association that would span 12 years. Sen became an asset to Ghulam Haider, as he came with considerable knowledge of classical and folk music, besides being an expert on the dholak. He assisted Haider in films such as Khazanchi (1941) and Majboor (1948), until the latter migrated to Pakistan post Partition.

Landing in Bombay in search of livelihood, Jamal Sen became part of an orchestra with Jhande Khan and a few others. He was noticed by filmmaker Kidar Sharma, who had an eye to spot talent. This was in the year 1951. Three years before this, Kidar Sharma had introduced Roshan as a music director, and registered a huge hit in the form of Bawre Nain. Now it was Jamal’s turn to turn solo composer with Sharma’s Shokhiyan (1951). Starring Suraiya with Premnath, the film was loosely based on a tribal uprising. Aware of Jamal’s knowledge of Rajasthan folk, Kidar decided to give Jamal the reins. Jamal went on to do wonders with Shokhiyan. Each and every composition was appreciated and the music was a hit. Sen’s employment of the raag Yaman Kalyan in the Lata Mangeshkar-rendered number Sapana ban sajan aaye proved his command over classical music. The colour and vigour of Rajasthani folk music was seen in his compositions Raaton ki neend cheen li rendered by Suraiya, a ghazal where melody reigns supreme, as well as Aai barkha bahar sung by Lata, Pramodini, and chorus. Door des se aajare sung by Suraiya and Lata had Sen blending folk and classical music in a fascinating pattern.

While he did go on to score music for Patit Paavan (1955), Amar Shaheed (1960), and Kasturi (1954), Jamal Sen was not able to match the quality of his earlier releases, and ended up losing ground to other music directors. His work in Aalha Udal (1962) went unnoticed as the film flopped, even though his Bhojpuri film, Naag Panchami (1964) did become popular locally. His work in Ghardwar (1970) did not make waves, while Sankalp never got completed.

With his talent for classical music and lofty ideals, Jamal Sen did not find it easy to adapt to the functioning of the commerce-centric film industry. Unable to manipulate or compromise, he was not considered for the cream of films, leading to him settling for mediocre films which were a waste of his enormous talent. Luck was also not on his side—a piece he composed on K Asif’s request for Mughal-E-Azam (1960), was eventually not used in the film. Similarly, when he was brought in to add Rajasthani authenticity to Naushad’s compositions for Sasta Khoon Mehenga Paani, the project did not see the light of day. Ironically, his imaginative score in the documentary, Madhumakhi, won applause on foreign shores, even as he lived in a state of penury.

Jamal Sen was the father of Shambhu Sen and Madan Sen.

Jamal Sen passed away on 12 April, 1979, within a year of the demise of his son Madan who passed away at age 40 due to a heart attack.