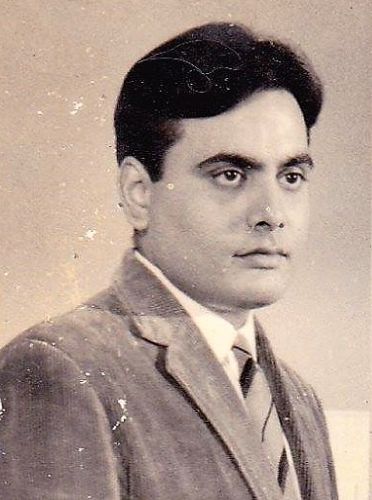 Actor-director Shiv Kumar is known for Hindi and Punjabi films such as Shehar Di Kudi (1966), Lallu Ram (1985), Goonj Uthi Shehnai (1959) and Qatil Jawani (1990). Many of his films possessed a cultural and devotional flavour. Appearing in supporting and character roles, he also featured in the Amitabh Bachchan starrer Majboor (1974) in which he played a lawyer, as well as in Maha Badmaash (1977) which starred Vinod Khanna. On him were picturised some popular and well-loved songs such as the Mukesh-rendered Main doondtha hoon jinko from the film Thokar (1974), and the Mohammed Rafi sung Donon ne kiya tha pyar magar from Mahua (1969), while he also featured in the famous Kishore Kumar song Sacchi kah raye lallu ram from Lallu Ram (1982).

Born on 12 January 1942, he belonged to Bembipur, Atrauli, Uttar Pradesh. His father was Shri Om Prakash Pathak. The eldest of his siblings, he had three brothers and two sisters. He was brought up and educated in the village Dedamai of Sasni area.

Among the early films he featured in were Jatti (1961), followed by Kishore Sahu’s film Poonam Ki Raat (1965), in which he got his first proper break. It was followed by Shehar Di Kudi (1966), and the very successful Hare Kanch Ki Chooriyan (1967) in which he played a lead role of a doctor. He played the hero in the hit Mahua (1969), which included many popular songs such as Maine tere liye jag chhoda tu mujhko chhod chali.

As a director, he helmed films such as Brij Bhoomi (1982), which starred Bharti Achrekar, Tom Alter, and Aruna Irani. Based on Braj culture of Western Uttar Pradesh, it is said to be the first film in the Braj Bhasha language. Shiv Kumar produced, directed and starred in it, while the music was scored by Ravindra Jain. His directorial Lallu Ram was an action comedy-drama featuring Arun Govil, and Aruna Irani in the lead roles. Shiv Kumar also featured in his patriotic directorial Maati Balidan Ki, co-starring Anu Dhawan and Sandhu Raj. In 2000 he directed Krishna Tere Desh Mein, featuring himself, Asrani, Poonam Dasgupta, Johny Lever and others. It had music by Ravindra Jain. His directorial Jai Shakumbhari Maa was released in 2000 as well. A devotional family drama, it starred Mamta Agarwal, Pooja Agarwal, and Eisshan. Shiv Kumar’s most recent Shaitan Tantrik (2002) belonged to the horror genre, starring Bharat, Hemant, Sajni Somaya, Anjali and others.

While he produced Ahinsa, and Lallu Ram, he also penned the story of the latter and the dialogues of Qatil Jawani (1990). He also rendered songs in Lallu Ram, which is considered his most successful project.

He also featured in the TV serials Mashal, Tara, and Pideeyan.

Due to health reasons he later moved to Faridabad. Shiv Kumar passed away on 2 September 2018 in Aligarh, Uttar Pradesh, India.