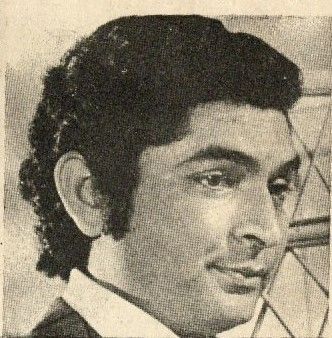 Asrani in Aaj Ki Taaza Khabar
From the younger set of comedians ARANI has come into his own this year. Two acting awards and lots of plum assignments ensure his secure career in the uncertain and constantly fluctuating ranks of the professional funny-men.
Asrani is a Sindhi.

But he hasn't caricatured a Sindhi in any of the innumerable comic roles he's played in Hindi films in the last few years. As a matter of fact, Asrani is wary in talking about his caricatures or the buffoon-type roles he's been made to play in this or that Hindi film. He prefers the subtler sort of comedy. Like that guy with the highly improbable sounding name of Champak Bhoomia which he played in Aaj Ki Taaza Khabar (1973) or like that mad-man he played in Anhonee (1973). The first won him the Best Comedian's Award from "Shama-Sushma" this year.

Asrani comes from a family of shopkeepers in Karachi. His father was (and still is) a cloth merchant. He is the third of four sisters and four brothers of a large and fairly prosperous family of cloth-merchants who had the foresight to get out of a city which was to become the capital of Pakistan when the Partition came. Asrani's parents migrated with the family to Jaipur where they put down roots and continued the same cloth business. Asrani studied in school and college at Jaipur and took his B.A. Degree first.

"When did you first get conscious that you wanted to become an actor?"

"When I was a kid in the third standard. My class fellows were putting on stage-play about Samrat Chandragupta. A good friend of mine was in that play and he was getting lots of admiration and applause while he did his thing.

"It made me quite jealous! I remember wishing that I was in his place on the stage, getting all the attention which he was getting!"

So Asrani started getting into stage-plays. He was often called to participate in the Children's Programmes of All India Radio, Jaipur. Asrani went to College and continued taking part in stage and radio-plays. He was eager to do any sort of role.

"When I passed my B.A. my parents and brothers discovered my desire to join the Film Institute at Poona. They laughed at me. My elder brother had begun to take care of the family business and they wanted me to become a cloth merchant too!

"Did you ever nurse any ambitions to become a hero?"

"Good heavens, no!" Asrani laughed heartily. "To be a romantic hero in films you've got to have a particular sort of romantic image - and I knew I never had that! I can evolve and fashion different sorts of characters out of myself - but hero? Never!"

"But did you ever attempt a romantic image?"

"Only once.For a trial lesson at the institute. They picked up a romantic scene form the late Bimal Roy's Sujata (1959) and I was made to enact it. I was awkward and felt very foolish doing it! I just couldn't bring it up from inside! That was my first and last attempt at playing Lover Boy!

"How did your first break in Hindi films come?"

"Producer-director Atmaram came to Poona in 1969. He wanted a whole bunch of newcomers for Umang (1970). He selected eight boys and three or four girls from the Institute. In all, he had a dozen new boys and a dozen new girls in that film, and I was one of them."

"What was your role in the movie?"

"Atmaram asked me to suggest something and I evolved a hippie's get-up and showed it to him. He liked it, and that was that. I had sort-of improvised the thing, to be different from all the rest of them."

"Nothing much. The movie didn't do well. But my next one, Guddi (1971)  did. And that got me seven to eight very good roles. Guddi actually marked the beginning of my developing what I like to term as 'character-comedy'."
"What's that?"

"I'm a quietly observant type. I'm fascinated by the odd, the offbeat and the unusual manifestations of human character. And I adopt from real-life, from what I have observed, and use it as a base to invent a wholly comic character.

"In Guddi I played a screen-struck youth who comes to films to become a hero - and lands up becoming and extra! It had only couple of scenes, but it left a mark.

In the South too, Asrani has bagged some major assignments: Vijaya Suresh's Prem Nagar (1974), Venus's Humshakal (1974) and Anjanelu's Sunehra Sansar (1975).

"Can you tell us something more about what you called 'character comedy' a little while back?"

"Yes. It's opposed to buffoonery. It consists of comedy based in character and arising out of character. I'll tell you something. When I was shooting in R.K. a couple of years ago I observed a labourer there who hopped along in a quaint fashion instead of the usual walk. People there had got used to him and didn't notice. But seeing him the first time I found it a striking thing. So I used that mannerism in a role I played later. It's like that.
"What are your views on scene-streaming? I believe 'heros' generally detest working with comedians because they're inveterate scene-stealer?"

"As far I'm concern I keep myself in reigns. I've worked with Rajesh, Amitabh, Sanjeev and none of them have any such grouse against me.

"But has such thing ever happened to you?"

"Yes, Once. Years ago I was doing Banphool and there was this scene with Jeetendra where both of us impersonate Sadhus and I got carried away. Since then I'm always careful to keep in limits."

"Do you keep in the director's orbit? Or do you prefer to let yourself get carried away by a scene?"

"I believe that any good actor cannot handle himself to his fullest abilities. He must have a good director to keep control over him. I've found in my own case that a certain crudeness colour my work if I allow myself to run away with a scene. I prefer a director's whip to keep me in control. I remember a couple of vivid instances where I thought I was going excellently, over and above the director's requirements. But when I saw the finished product on the screen it was awful.

"Which are your good roles in forthcoming films?"

"Nagi Reddi's Prem Nagar; Ramesh Sippy's Sholay (1975); Prasad's Bidai (1974) in which I have a double role; Chaitali (1975) and Khushboo. And yes, Prakash Mehra's new film in which I have an unusual role of a killer who never speaks a single word. Again in each film, I have developed specific characterizations."
"With which directors are you most at ease?"

"Gulzar, Hrishi-da and Shakti. They're so good it becomes easy to do your best with them."

"Are you happy at the pace of your career now?"

"Yes. There was a time when I was nervous about the future, but not any more. I have avoided being a typed aby consciously and deliberately creating different characters for each of my films. I am happy that my efforts have been recognised by the cinegoers too. Do you know: I was nominated for a Best Supporting Actor's Award for my role in Abhimaan (1973) this year?"

This interview was originally published in Star & Style Magazine's 26 April 1974 issue. All the images used in the feature are taken from the orginal article.
1105 views