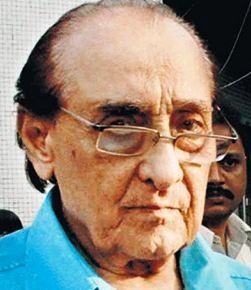 Tahir Hussain, better known to the younger generation as the father of superstar Aamir Khan, was a producer, director, and writer. He was born Mohammad Tahir Hussain on 19 September, 1938, in Shahabad, Hardoi district, United Provinces, British India. He began his career in the film industry in 1961, debuting as an actor in the film Jab Pyar Kisi Se Hota Hai (1961). This super hit film revolved around the story of a rich girl whose father desires her to marry his friend's son whom she dislikes. Hussain went on to work as a production executive with the cast and crew of the successful film Teesri Manzil which released in 1966. Pyar Ka Mausam (1969) saw him essay his second acting role, as he played the character of Sardar Ranjit Kumar. He would later act in Janam Janam Na Saath (1977) and Dulha Bikta Hai (1982); however, he had shifted his focus to film production in the 70s, producing his first film, the musical comedy titled Caravan in 1971. Tahir was the younger brother of writer/ director/ producer Nasir Hussain. It was Nasir who directed Tahir's Caravan, starring Jeetendra and Asha Parekh. The film had music by R D Burman, with lyrics by Majrooh Sultanpuri. With a plot inspired by Girl on the Run (1953), the film became a resounding hit in India, and surprisingly even in China where it became the highest-grossing foreign film when it released later in 1979.
Tahir Hussain went on to produce successful films such as Anamika (1973), which was a romantic, suspense film with memorable songs by R D Burman and lyricist Majrooh Sultanpuri, including Meri bheegi bheegi si, rendered by Kishore Kumar, Aaj ki raat by Asha Bhosle and Bahon mein chale aao, rendered by Lata Mangeshkar. It was followed by films such as Madhosh (1974), Zakhmee (1975), Janam Janam Na Saath (1977), Khoon Ki Pukaar (1978), Locket (1986), and Tum Mere Ho (1990). Hussain’s 1993 production, Hum Hain Rahi Pyar Ke was a super hit romantic comedy-drama film, directed by Mahesh Bhatt. With screenplay written by Aamir Khan and Robin Bhatt, and musical score by Nadeem-Shravan, this Aamir Khan-Juhi Chawla starrer won critical acclaim as well as commercial success. It fetched the Filmfare Best Actress Award for Juhi Chawla, also winning the National Film Award - Special Jury Award/ Special Mention (Feature Film), and the Filmfare Best Film Award. Hussain was also the producer of Madhosh (1994).
Hussain also made his directorial debut, directing his son, Aamir in Tum Mere Ho (1990). He had also written the film, a fantasy revenge drama which saw Aamir essaying a character gifted with magical snake-charming powers. co-starring Juhi Chawla as a village girl, with Kalpana Iyer in a negative role as a shape-shifting snake.
Married to Zeenat Hussain, and later Ayesha Hussain, he is the father of actor Aamir Khan and Faisal Khan, and daughters Farhat Khan, and Nikhat Khan.
Tahir Hussain passed away on 2 February, 2010 in Mumbai, following a heart attack.