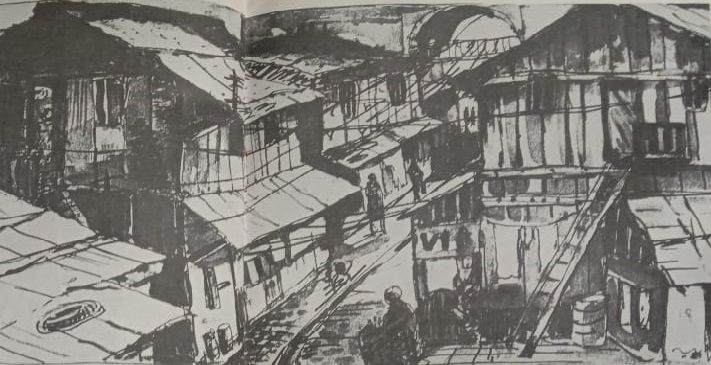 A et design by Sudhendu Roy

In the fifties when Bansi Chandragupta was making a mark as an art director to the black and white films of Satyajit Ray, the art directors in mainstream Hindi cinema were discovering colour. The parallel cinema did not come into its own till the late sixties. The art directors active in the fifties belonged to three discernible streams; the first type were those who had been to an art school in Bombay and then joined some established art director as an assistant before branching out on their own; the second type were migrant art directors form Calcutta from where a new wave seems to arrive every ten or fifteen years; the third type wens those with no background in the arts but who had worked as carpenters, moulders, background painters or some such allied et all and then worked their way up to being independent art directors.

Today Sudhendu Roy, who arrived in Bombay from Calcutta in 1953, is considered the doyen amongst the art directors in the Hindi film Industry. Sudhendu Roy met me one day outside B.R. recording studios in Juhu and when I asked for an interview told me laconically. "Baba, you make up something and write it as if I have given an interview." But I wasn't to be fobbed off so easily and arrived at his atelier in Mehboob Studios two days later. In his sparse, bare white office, which looks more like a doctor's clinic than a studio, he was more forthcoming. "I studied painting in Calcutta under Satyachandra Ghosh and then worked under Bimal Roy as a still photographer in the Luce Studios. Then in 1945 Bimal Roy asked me to join New Theatres as an art director. After Bimal Roy came to Bombay. I stayed on in Calcutta for a few more years. There I must have designed a dozen or more Hindi and Bengali films including Bimal Roy's Hamrahi (1944) and Pehla Aadmi (1950). Fortunately, I did not have to move straightaway into being a freelancer in Bombay as I was used to working in the studio system. I was to begin with an employee of Bimal Roy's and the conditions of working were like that of a studio. I had enough time to finalise my designs and knew every member of the team and could have proper discussions. But as a freelancer, those facilities have gone... Whatever experimentation I did was before I became a freelancer. There was a chance to experiment with materials and to use techniques like miniaturisation and mattes. I even used fog-machines, a novelty in those days.


"Alter the famine of 1942 and the riots of 1947 a lot of writers in Bengal changed their style and the painters also started to paint grim and harsh themes. The subject matter of the films in Bengal also reflected this change. Films made in Bengali and by Bengali film-makers like Bimal Roy and Nitin Bose in Hindi were films which were dealing with social problems. In Bombay, they called this the Jhonpra school of film-making. In the beginning they said I belonged to this school and was not able to put up glamorous sets but after Mere Mehboob (1963) I proved them wrong. Today, I design all sorts of films."

He continues: "Designing requires a lot of concentration, but this is not always possible. When l design for people who art direction from architecture, applied arts or painting, some even with no such background but simply on being promoted by friends and relatives. Today with painters being so successful, I doubt if many will want to join the cinema as art director, where they have so little scope to be either creative or make a reasonable living. I myself am not so well off financially though I am considered one of the successful art directors. Because most people learn about cinema only when they join up as assistant art directors, I had along with Bansi and others wanted FTII in Pune to teach art direction along with cinematography and editing, but out proposal was not taken up."

R K Handa states, "Of course television and ad films have opened up the field for art direction. But unfortunately, there are many amateurs passing themselves off as art directors and most of them do not know the ABCD of art direction. Unlike the film industry, where the entry of technicians is controlled by the craft unions who demand a certain standard, the ad films and especially television are totally anarchic. The result is that television designers try and copy the same goody colours and shinning objects that are used in song and dance numbers in commercial films. Television is an intimate medium and the format is more limited than in the cinema and should be treated in that way. Certain colours are troublesome on television, such as red which bleeds and white which has a ghost effect. Ad film makers are generally more professional but here also the contribution of art direction could be much more effective. Basically, I think it is the industry in Bombay is not professionally organised, and in most regional centres they have great budget problems.  Only in the South I feel has there been a sudden improvement in the quality of art direction, especially in films like Nayakan (1987) and in some films in Kerala. So there is a still hope for us in Bombay, provided the production sector develops a greater sense of professionalism. I see no other way."

Most art directors, however are not as sanguine as Roy or as desirous of overhauling the system as Handa. They want to just somehow continue compromising and working in the industry. As M.S. Shinde says, "One has to remain in this line till the end so adjustments have to be made. I consider myself a creative artist but still I have to adjust even when with directors who have no understanding." Shinde whose work is much admired by his peers, is not from the glamorous J.J. School of Art, but from the humbler Nutan Kala Mandir where he did a four year diploma course. But he claims his painting background did not help him much as an art director except in colour and composition and he says, "I can also point out mistakes in the work done by background painters." Anyway after art school, Shinde joined a bank. One day, fired by a vague desire to join films, he was introduced to Shanti Dass by a common friend who was a cameraman. For twelve years he worked as Shanti pass's assistant and is convinced that this is the best and only way to get properly trained to become an art director.

It's not that Shinde is not willing to discuss the problems he faces but his concerns are more practical such as the fact that the carpentry and moulding departments in most studios are inadequate and badly organised. He feels that with labour costs rising there is a shortage of skilled workers, as they can make more money outside. He also is of the opinion that designing for the film industry has nothing in common with the other arts. As he says, "The reason is that we have a totally different way of working. We work less on paper and more with materials. Moreover, we have to make quick and on the spot decisions. And what we make is then destroyed, because it is not meant to be long lasting."
Shinde has worked for a variety of directors, but considers the work he has done for Bapu and Mahesh Bhatt as the most satisfying. Bapu himself is an artist and calligrapher and he used to work out tough sketches of the sets he wanted. "But I did not have to follow what he did," asserts Shinde. "This was for Woh Saat Din (1983) and then Hum Paanch (1980). The producer was keen on another director, so I really had to prove myself." Like Mahesh Bhatt's films, Shinde's art direction has a "hard-edge" quality as can be seen in the recent Aashiqui (1990) or earlier Arth (1982). About Mahesh Bhatt, Shinde says, "We work very closely. There is not much discussion on the sets required because by now I know exactly what he wants. He also respects the contribution of an art director, and he also points out my mistakes correctly. We work out the rough lighting together with the cameraman before the shooting begins. Getting a particular visual style is a matter of team work. And it is through teamwork that directors like Bimal Roy, Guru Dutt and Mahesh Bhatt have been able to prop up that own style."

This article was original published in Cinema In India's February 1991 issue. The images are taken from the original article.
635 views