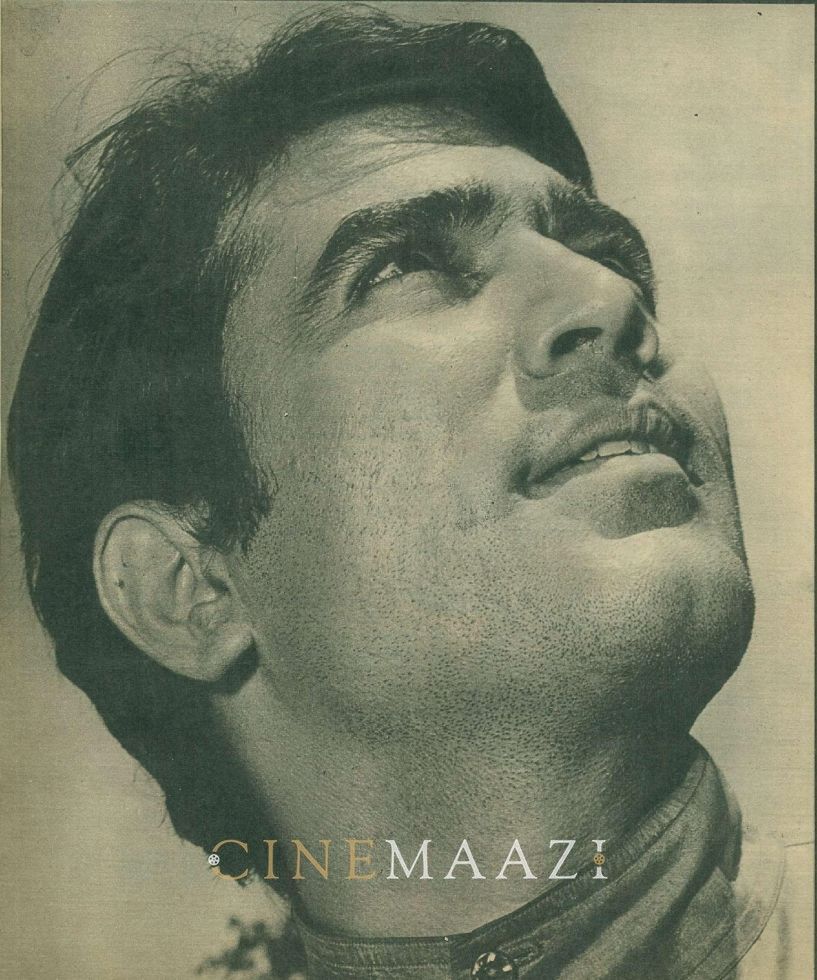 The shock was eminent. I had not been following the IPL since its birth, yet on that fateful day I was watching a match and during the customary over breaks when I was not looking at the TV as such flew in the voice “Fans kya hain, mujh sey puchhon”. I looked up in a flash to find an old Rajesh Khanna picture and some vintage shots of girls howling and following his car. That was all of it. I told my wife that they have used the image of Rajesh Khanna in an advertisement after so many years.  The same Havel’s fan ad was repeated almost in all subsequent breaks and as I looked close, I could make out that I was not wrong – there is the image of Rajesh Khanna, his shadow but definitely not him! At least the one whom we used to swoon over in our boyhood days.

Growing up in the eighties made sure I had the direct influence of the towering Amitabh Bachchan as far as Hindi cinema was concerned. Hindi cinema itself had a sort of scandalous association with it in the typical Bengali middle-class homes at that time. Bengali cinema had by then started losing its shine – but still, there was a lot of pride in the ‘culture’ depicted in the movies and the social space. Even in those boyhood adulation days, I was never drawn to Big B’s heroics. I had been a fan of Mohd. Rafi and the boisterous Shammi Kapoor. Now I don’t remember with which film, but the charisma of the young and vibrant Rajesh Khanna caught on to me quite surreptitiously.  That was quite uncanny and even ironical since liking Rajesh Khanna means liking the songs he lip-synched in the films as well, which implies the death sentence of my favourite singer. Fortunately for me, I continued to cherish Mohd. Rafi (till today he is the best male playback for me in Hindi cinema) and yet cling on to my fast rising fandom for Rajesh Khanna. Since it was not only the songs, but there was some innocence in his charm which was never present in the world of Deewaar (1975) and Zanjeer (1973). Growing fast I could make out how mannered his characterizations were in most of the cases and how unreal. He soon vanished to be my idea of a romantic individual yet, time and again I thought of the crinkling of his eyes, the deep look at his heroine and the slight tilt of his famed mannerism – unmistaken in carrying the milk of love for his beloved. For, in the make-believe world,  only dreams sell.

But that is where it all went wrong.  Rajesh Khanna was never physically athletic and soon he became plump with a receding hairline. Like Dev Anand, he turned to being a robot with repetitive mannerisms and unable to read the writing on the wall. Not having a chance to witness his blitzkrieg with the first 15 hits in 3-4 years meant we at our age had to be content with his second innings in the ‘80s. Needless to say, notwithstanding big hits like Souten (1983) or Avtaar (1983) or even Amrit (1986), Rajesh Khanna then was a caricature of his original and could never match up to Amitabh Bachchan. To see your favourite star prisoner in his own trap is so pathetic that I almost gave up watching his cinema again.

In 2012 when the news of his repeated hospitalizations poured in, like many I started browsing the net, the YouTube and all possible media to rekindle my memories – lost but not forgotten.  And then I found out the intriguing documentary on him in 1974 – The Bombay Superstar which along with few memoirs that I read after his death summed up his persona – arrogant, pensive, moody and disrespectful. All vices that will pull anyone from his statuette, leave alone RK.  Yet somewhere I felt, he came out as a decently intelligent person to understand that whatever he said was not always whatever he believed. And thus the Bachhan-Khanna personality dual seemed analogous to the Satyajit Ray-Ritwik Ghatak one. In both cases, the taller versions had been modest, rooted and acceptable to changes that were beyond their control. The shorter versions remained enfante terrible, surrounded by sycophants and in the end ruining their lives and careers in the bottle of alcohol.

In one rare event, the magazine Movie in the mid of 1990 gathered both Khanna and Bachhan together for the first time after they did Namak Haram (1973) together – it was a joint interview. That opened up their difference in approaching life – in taking up success and coping with failures. As Rajesh Khanna says “Andaz ka premiere tha wahan. One couldn’t see anything but heads bobbing down the whole road, which was almost 10 miles long. And there was just one echo of the voices – ‘Haaaaa’ You know, it was like a stadium from the time of the Romans. I wept like a baby. I am very surprised, Amit, that success and failure leave you untouched. I mean, I am not a superhuman being. You are not Jesus Christ and I am not Mahatma Gandhi. I remember that once at three in the morning, I was pretty high on spirits and, suddenly, it was too much for me to stomach because it was my first taste of failure. One after another, seven films had flopped in a row. It was raining, pitch dark and up there alone on my terrace, I lost control. I yelled out, Parvardigar, hum gareebon ka itna sakht imtihaan na le ki hum tere vajood ko inkar kar de,’ (Don’t test my patience to such an extent that I question your existence.). Dimple (Kapadia) and my staff came running, thinking that I had gone insane. It was because success hit me so much that I couldn’t take the failure. I remember the next day, Balaji (a South producer) offered me Amar Deep (1979) out of the blue. It gave a second lease to my career.” He continued then in his traditional style “A king dies a king! He might be dying alone … but he will still be a king, whether on the throne or in exile!” – never accepting that it was he who thought such, no one else did the same then. However in the same interview he was candid about the rise of Amitabh Bachhan as his successor to the throne – “When I saw Namak Haram at a trial at Liberty cinema, I knew my time was up. I told Hrishi-da, ‘here is the superstar of tomorrow’”. Isn’t that contradictory? It is and that contradiction defines Rajesh Khanna.

In my opinion however, I felt the turbulent 70’s would not have supported the romantic image anyway – even if Rajesh Khanna would have led a disciplined life and did not foster his own downfall more than anyone else. His iconic image of the loner who is not destructed by the love of his beloved only (or lack thereof – which made Dilip Kumar such an immortal tragedy king of Indian cinema) but more devastated by fate which takes away his romance with life more than anything – this image of the loner was being transformed to that of the hero who rises and fights for the common man. Amitabh Bachchan’s rise was with the masses, the mass that shook the world with their freedom across the globe in the early 70s, and in India throughout the ‘70s. Looking back hence, I think Rajesh Khanna never had a solid chance probably unless he changed his image completely to fit in the dhisuum dhissum mould which anyway he was a misfit in.


So where does RK leave us then? He leaves us to his early films – where he did have the courage to experiment keeping the stardom of the central hero intact. From the killer on the run in Ittefaq (1969), to the patient in Khamoshi (1970), the terminally ill characters in Anand (1970), Safar, the psychotic killer in Red Rose (1980), the cook in Bawarchi (1972) and not the least the endearing hathi-uncle in Hathi Mera Saathi (1971). It was a pity that apart from a handful of competent directors viz. Hrishikesh Mukherjee, Basu Bhattacharya, Asit Sen and Shakti Samanta to name a few (interestingly all Bengalis!), Rajesh never got better directors to match up with his acting style and prowess. To me, the one film that stands out is Basu Bhattacharya’s Aavishkar (1973) where Khanna played the role of a husband fighting a troubled marriage. The role was devoid of the traditional hero’s baggage and Rajesh Khanna essayed it to perfection.

The last media clip of him showing “V” to his fans from the balcony of his beloved Ashirwad echoes his idea of death –“I am not scared of death at all. So when death comes, I will just smile.”

To many admirers including me, Rajesh Khanna symbolized the lightning that Mark Twain so famously mentioned – “Thunder is good, thunder is impressive; but it is lightning that does the work”. He fought with himself throughout – both in his enigmatic career and his troubled personal life. Three years after his passing away, he still comes into the news for all the wrong reasons – not for his films or his acting career. Unfortunately, he has been forgotten long before he physically died. To any actor that is probably the biggest tragedy.

This article was originally published in Silhouette magazine (https://learningandcreativity.com/silhouette/rajesh-khanna/). The images used in the feature were not part of the original article and are from Cinemaazi archive.
1134 views