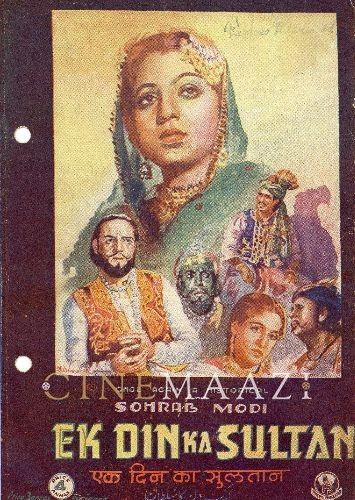 Using the tiny historical incident reflecting on the generous and loyal character of Emperor Humayun, Producer Sohrab Modi has given to the filmgoers some fine entertainment in Ek Din Ka Sultan (1945).

This picture has the usual historical grandeur for which Sohrab has quite a name and though there are a few flaws here and there. one must Welcome Ek Din Ka Sultan as a worthy contribution to the quality output of our film industry.

Primarily it is the story of a soldier of fortune. Nizam, a brave, hail-fellow-well-met type of a soldier, rescues Kauser, the daughter of Sher-e-Koh, a Mughal Sardar, from a fire. They fall in love with each other and soon start doing heavy breathing. Nizam has Azim, a water-carrier, as a friend and he lets his love-sighs on him, while Kauser intrudes on her favourite maid Sambul.

When Sher-e-Koh comes to know of this romance, he frowns at it and soon working himself into a rage on a flimsy reason, sentences Nizam to be beheaded. But hereos never dies so easily and at the last minute, Emperor Humayun's coincidental journey through the streets saves the Nizam's life.

There is now a war in which Humayun's life is saved by Nizam who is promised a boon in exchange by the Emperor. This incident has been slightly changed to suit screen purposes Ferishta (Briggs II pp. 88) mentions a professional water-carrier who threw his 'masak' to enable the Emperor to swim across and was in turn allowed to sit on the Mughal thrones for half a day. Sohrab gives the opportunity to the hero who, though a professional soldier, is at the time in the army as a water-carrier. Not much harm done, as the incident is not misused.

The romance between Kauser and Nizam now takes a tragic turn with the girl's father thinking of getting her married to someone else. Matters become desperate and Nizam goes to the Emperor to ask for the fulfilment of the boon. Humayun puts hint on the throne for a day and matters soon reach a solution in which the hero gets his girl.

The picture has some beautiful production values, especially in sets and shot executions. In parts the story is very well shot, though the photography is inclined to be a bit hard throughout. Sound recording is reasonably consistent. The music of the picture is not so attractive but the song compositions of Walli are quite good. The picture has fine dialogues thanks to Agha Jani Kashmiri, who is fast becoming an intelligent writer. The technical direction of the picture is impressive. The story direction, however, leaves some scope for improvement. Some sequences seem to have been dealt in a sketchy manna by Sohrab. This may have been due to the footage restrictions. Ek Din Ka Sultan was a picture that should have been given extra footage. And yet, on the whole, Sohrab's work as a director is quite satisfactory, seeing the acting material he had in hand.

With the exception of A. Shah and Ghulam Mohammad, the other artistes do not seem to fit the characters properly. In the role of Kauser, Mehtab looks anything but young and marriageable. Nevertheless, she gives a good performance despite her age-handicap, which is too obvious in several shots throughout the picture. One finds it difficult to associate youthful romance with the dowager-like personality of Mehtab. Wasti in the role of "Nizam" doesn't seem to have got out of his Kardarish mannerisms which were so much in evidence in "Sharda". This fellow has gone fat now and looks more like a weight-lifter than a glamour boy.

Sadiq Ali looks a poor "Humayun", slight and without dignity. His face has never acted so far and one did not expect it to express now. So he doesn't disappoint in the tiny role which he plays Ghulam Mohammad fitted the role of Sher-e-Koh very well but he seems to have lost his old fire nowadays.

The best work in the picture is given by A. Shah in the role of 'Azim' the water-carrier. He practically lives the role and succeeds in winning everyone's sympathy. From the rest Shanta Rin attracts as "Sambul". At places, she steals the situations from Mehtab.

In short, Ek Din Ka Sultan is certainly a picture worth seeing if not for any historical revelations, at least for some good entertainment.

This review was originally published in Film India's January 1946. The image used in the feature was not part of the original article and is taken from Cinemaazi archive.