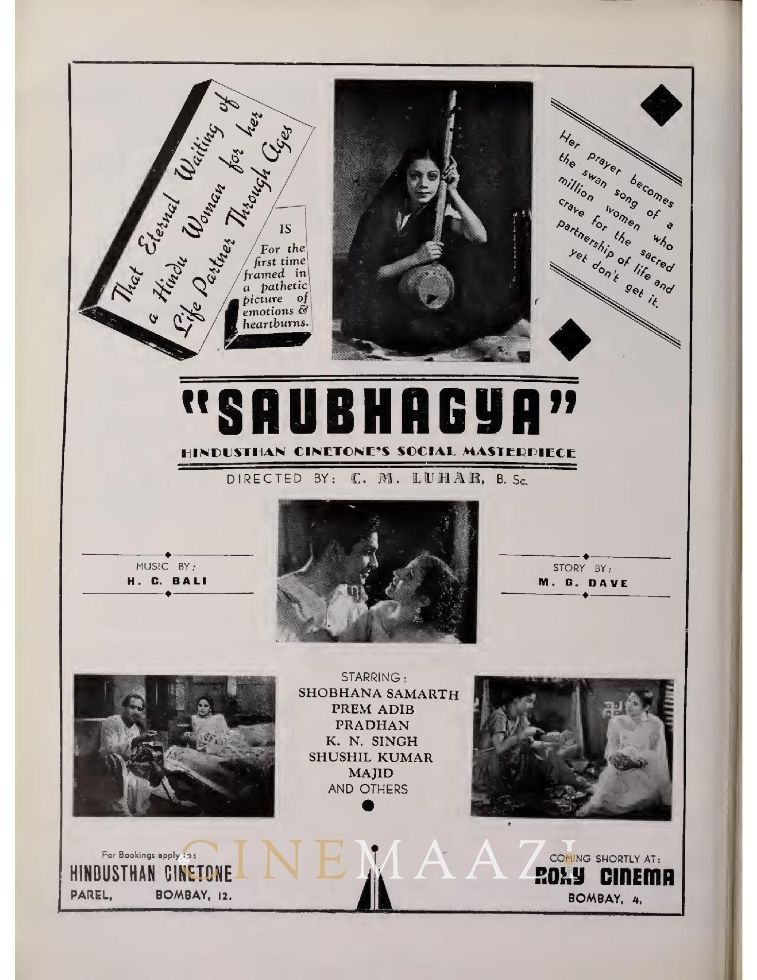 Shobhana Parades As A Mannequin !

“Saubhagya” is a poor successor to “Mud.” In “Mud” the producers had given a promise of bold and progressive picture. In the present one. However, they have gone back into the old rut of a weak and indecisive theme presented in a slipshod and clumsy manner.

I have seen a hundred stories of Mohanlal Dave including “Saubhagya” and I still think that he cannot write a good screen play. Once in a while Dave gets a good idea, but in my opinion he makes a mess of it while conveying it to the world. His views on life, as reflected in his hundred and odd stories, are orthodox and when he makes an attempt to be bold he draws ridicule upon himself.

He seems to be one of those writers to whom the box-office is the temple of god and probably starts counting the returns before setting out his theme.

Men who tremble between commercial instincts and their mission in life, as Dave seems to do, can never make forceful screen writers. The screen in India today needs brave writers with imagination to tackle our social problems in a progressive way. Dave is too old to learn this and he has therefore given an old story, in which he says that a virgin widow should die a widow rather than remarry.

And to justify this, he quotes a lot of emotional nonsense about a Hindu woman being married only once in life and the subsequent hocus.

It is a surprise how Nanubhai Desai, a lovable rebel amongst our producers - more cultured and educated than several of them put together, should have made a scapegoat into accepting such a stupid theme for production.

I would put the entire blame at Nanubhai’s door. He has no excuse to give. If a producer with his experience and courage stoops to pander to the imaginary demands of a stupid orthodoxy, then the earlier he throws off the pretence of production the better.

People look up to Nanubhai for something greater, something more bold and more progressive. After “Mud,” I thought, he would give it, out he has let us all down. Inexcusable!

A young man Pradip and his sister Rajani live an impoverished life. They were rich once but a friend of their father had robbed them. The young man is an artist of some sort. He knows that his sister is a child-widow. But she doesn’t know that.

The other family who had become rich now consists of a girl Rohini - rich, willful and fashionable, a manager called Kedar and his profligate son Natwar. Kedar’s game is to get Natwar married to Rohini so that his son can get all the millions which Rohini is supposed to have.

Rohini, however, meets Pradip the artist and falls in love with him and vice versa. Pradip is struggling to get his sister remarried, but Kedar manages to spread about that she was a child-widow.

When Rajani the child-widow comes to know of her previous marriage she bolsters up devotion for a husband she doesn’t even remember and retires into widowhood.
Pradip, for no reason whatsoever, decides to remain a bachelor. Rajani seeing the love between Rohini and Pradip realizes that she is in the way. So she stages a suicide and disappears.

After a little more emotional nonsense, Pradip and Rohini are joined together by Rajani who makes a sudden appearance as a tapaswini.

The whole affair is too damn emotional to be sensible and this should have been the last story for a screen-play in present times.

The direction of Luhar is as good as the story of Dave. A better director would have failed. The photography of Hardip is not as good as in “Mud.” Sound is not bad. The music of Snehaprabha Pradhan is the outstanding feature of the picture. But she looks awful on the screen the camera being very unkind to her less photogenic features. K. N. Singh is unnatural, stagy and disgusting. Shobhana Samarth seems to have forgotten the art of acting. She moves about like a well-dressed mannequin, a stranger to emotion. Prem Adib was not bad. Though one wonders why he waves about his arm while singing.

The only good performance was given by iqbal, the little boy.

To people with an orthodox bent of mind, it is a good sob-stuff. But to vigorous modern people it is all a nonsense. Men, like Nanubhai Desal probably ought to dislike the picture most. They don’t compromise with life and seek quarter.

This is a reproduction of the original review published in Filmindia, September 1940.