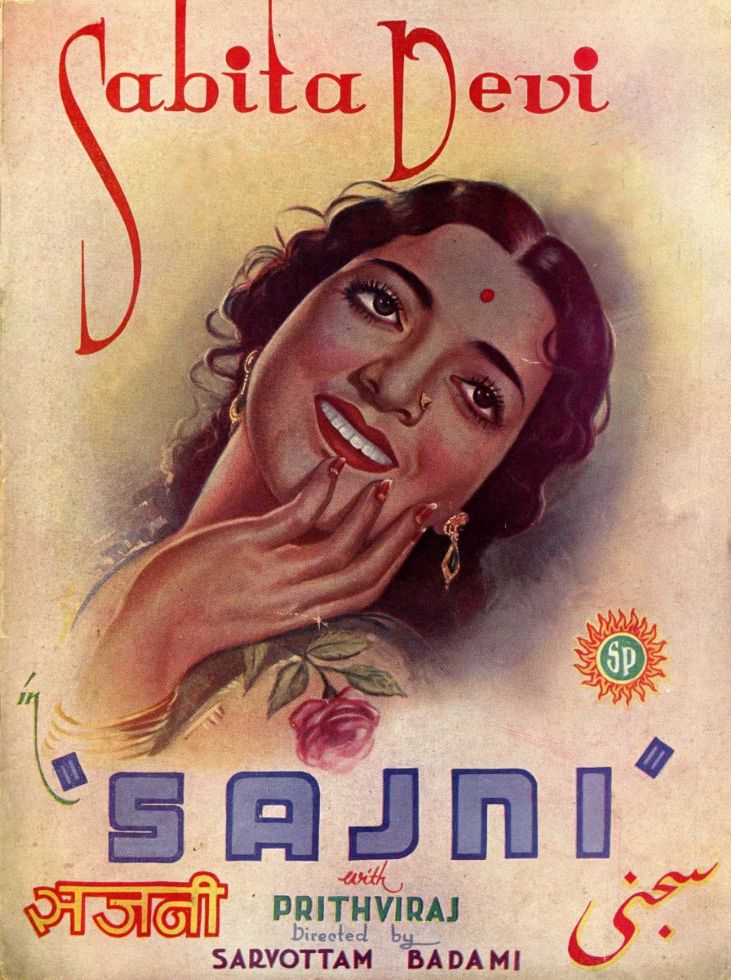 It is painful to record here that Sabita, once the favourite of millions, seems to be no longer a box office draw. It is all the more painful to observe this, just when Sabita had begun doing really good work in “Chingari”. “Sajni” seems to be the beginning of end of this star’s one-time glorious career.

To me two reasons present themselves as a possible explanation of this tragedy. The first being a bad selection of stories featuring Sabita and the second is the narrow-minded policy of exploitation which excludes certain important media of publicity in spite of their huge circulations merely for personal vindication of imaginary grievances. Even the few advertisements that have appeared in some local papers are so stupidly written that instead of attracting people, they drive them away from the theatre.

Sagar had built up Sabita as a box-office star merely on the strength of extensive publicity as Sabita had very few inherent points of attraction. If the same wisdom is realized, then and then alone will Sabita remain on the screen in future. Not even the biggest millionaire in the world can continue a losing business for long and one day or other Sudama will be compelled to stop and think.

That will be a bad day not only for Sabita but also for director Badami. A director only lives as long as his efforts pay and so does the artiste. A financier may go back to his distribution business and make good what he loses in production. But what about the artiste and the director, once they are condemned as useless?

In fairness to Sabita, this matter ought to be thoroughly thrashed before the next Sudama picture is put on the screen. If Sabita, who is herself a partner in production, lacks the moral courage to face this problem squarely, let her join some other company as an employee instead of heading for a certain suicide in this way. There are still many who would like to see Sabita on the screen. Let her not disappoint them.

“Sajni” has hardly any story. The effort at best is merely abortive. I cannot understand how anyone can select such a weak story for a production that costs nothing less than a hundred thousand rupees. It would have been better to throw that money into the streets. At least the needy would have picked it up and put it to better use.

A village money lender’s son Nanda – Prithviraj - falls in love with Rupa- Sabita - a farmer’s daughter. For no reason at all the romance is prolonged through abortive situations. The money lender objects and gets his son married to Radha – Snehaprabha - whose father has given six thousand as a dowry. Within a couple of scenes the drama ends, in which Rupa has made a sacrifice and insists on Nanda loving Radha. To get Rupa’s blessing Nanda swallows his love for her and agrees to do so.

The story is supposed to be extremely emotional. But Sabita the heroine of the tale hasn’t even one tear to waste. Her father dies and she has not a tear for him. Her lover marries and her heart is broken and yet the tear is missed. Why was not glycerine used? Was there a shortage of it due to war?

And how does Sabita look? As she never looked before on the screen-emaciated and colourless. May we know why?

“Poor Prithviraj”. That is all I can say of him and anxiously wait for his next picture.

Snehaprabha Pradhan as “Radha” gives a theatrical performance. Her pathetic plight when she discovers that her husband loves another woman excites ridicule. She speaks to her husband about “Hindusthan” and “Samaj’ and seems more aware of the pronounciation and diction of her words than their meaning. It is too poor a performance for her. She, however, sings the last song well, but there again there is no emotion in it.

Nur Jehan as “Champa” was the only one who gave a tolerably good performance. It was in the time-worn fashion, and yet it was not bad.

Photography and processing were bad enough. Add to these, rotten projection and you can imagine the effect on the audience.

About Badami’s work as a director, less said the better. After “Chingari” one feels like being stabbed in the back.

“Sajni” is a picture that Sudama would do well to forget as it’s memory will prove an awful obstacle in future progress.

This is a reproduction of the original published in Filmindia, 1940.