Mummy called them two 'phool', whilst Daddy said they were two fools! Dewan Bahadur Atal Raj believed that both his sons, Pavitra Kumar (alias Puttan) and Charitra Kumar (also known as Chuttan) were nothing better than loafers and ne'er-do-wells. Their mother Malati stubbornly pinned her faith in Chuttan and Puttan and asserted that they were still mere children. Let us find brides for them, and then watch the result!

Chuttan was the younger brother. There was a proposal of marriage for him with Shaila, daughter of the lawyer Vardhraj, who was also a practicing Vaid. Puttan accompanied his younger brother, when the latter visited the house of his proposed bride. Both brothers approved of the match. Puttan had already his own plans, and his heart's desire was Poonam, daughter of Inspector Madhusudhan.

Unfortunately, the path of love is never smooth, and in desperation both brothers decided to bury themselves alive in a 'Prem Samadhi' unless Shaila and Poonam accepted their hands. This public exhibition of their love enraged their father, who took the extreme step and turned them out of his house.

Still hoping to win the hearts of their beloved, Chuttan and Puttan hatch a plot. Saying that he had murdered his brother Puttan, Chuttan rushed to Shaila to seek refuge. The poor girl believed his story, and tried to shield him from prying eyes. Meanwhile, Puttan took to a disguise, which led him to a smuggler's den. The criminals discovered him in their midst, and after knocking him unconscious, he was thrown into a convenient lake. Now Puttan really disappeared, and to his brother Chuttan's ill luck a body floated in the lake on which was found Puttan's identification in the shape of his jacket and watch. Chuttan was wanted for murder! The joke had boomeranged.

Puttan's father believed that his son was still alive, a faith shared by Shaila. Puttan's photograph was advertised widely, with a reward offered to anyone reporting his whereabouts.

Now enter into the drama Mani, who bore a striking resemblance to Puttan, his mother, and his betrothed Rukmini. Two desperados notice the resemblance, and kidnapping the protesting Mani, carry him off to Bombay to claim the rich reward from Diwan Bahadur Atal Rai.

Incidents follow, fast and furious, and the story of "Do Phool" races towards an unexpected climax, providing exhilarating entertainment as laughs and thrills loom as large as life. Such incidents are better enjoyed upon the screen, and it is left to the viewer to decide whether Chuttan and Puttan are 'Do Phool' or really 'Two Fools'. 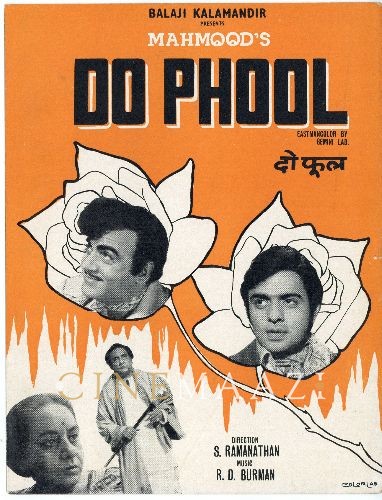