STRANGE are the whims, fancies and attitude of MAN, who born of a WOMAN treats her with utter contempt, if she bears him daughters only. This ugly obstinacy an unworthy inheritance from his ancestors and his magnum ego have ingrained in him the obsession that he must sire a son because the name of his family and dynasty is known and continued by the male child only.

So, when Thakur Chandra Prakash Singh's wife Sharda, after begetting three girls is carrying his fourth child, his mother gives her son an ultimatum: if Sharda bears another girl, the Thakur must bring a second wife who will bear him a son to carry on the VANSH. SHARDA is stunned by this decision, more so by her husband's resolve to carry out his mother's advice Sharda panics, resulting in a premature delivery. The Thakur is overjoyed that Sharda has given him the gift of a bonny son atlast! But STRANGE are the ways of DESTINY of which the Thakur is supremely unaware.

He lavishes all his love, care and wealth in bringing up his son and heir.
Lolling in luxury Vishal grows up to be a handsome young man, educated and accomplished, jovial and always happy the apple of his parants' eyes.

Comes the time to find a comely bride for him. The Thakur and Sharda send Vishal to Srinagar to see Rita Singh the daughter of millionaire Ranjit Singh and if he approves of her to ask for her hand in marriage. Rita tries to woo him but Vishal falls in love with Ruby Miranda who studies on a scholarship and does part-time work as a librarian in Rita's house to support her father.
Against the spectacular and breath-taking landscapes, lakes and waterfalls, a tender elegant romance blossoms between the rich Vishal and the poor Ruby Miranda, enriched with some of the most haunting music and songs.

AND it is now that DESTINY throws its trump card. The Thakur puts his foot down at his alliance. Vishal rebels and soon, happy times and a blissful togetherness are shattered Nerve-shatering and heart-rending events follow n quick succession.
The follies of the Thakur's dogmas and obstinacy his dream of the great vansh al lie in ruins before him. The spectre of Vishal's death shakes him to the bones and as TRUTH dawns on him, the mighty THAKUR struck by an onrush of realities is suddenly dislodged from his high pedestal Humbled by the turn of events, does he bow to the dictates of his destiny?
See HAMARA KHANDAN.

See how the women of our country victims of the superstitions and cruel dictates of the men are trying to break the shackles that bind them to bring about a new sane order to enrich the family life. 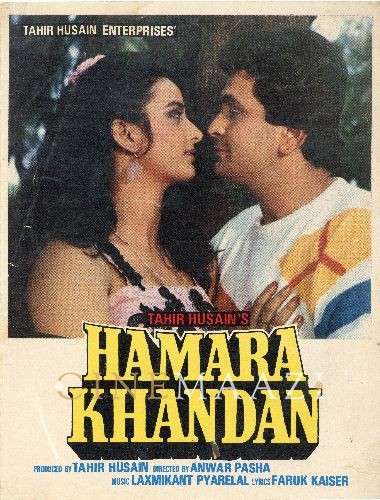