I used to move and talk freely with everybody. But my daddy and that Shakuntala always used to scold me-Why? All said Kusum is beautiful but when question of marriage came-they said that Kusum was a bad girl-Why?

Kusum Didi was playful-open hearted frank and innocent like a child, but we were carried away by rumours. I wish I get a Didi like Kusum in all my births.
Bipin Gupta (Madhav Prasad)

My daughter Kusum was like a fresh flower, like a dewdrop. All the while I knew it. But the wicked forces were so strong that I became helpless. I can never forgive myself for what happened to my beloved daughter.

World thrives on falsehood deceit and dishonesty. I wanted to blackmail Kusum and earn money. I did it successfully and fools as they are, thought that Kusum is a bad girl. What can I do? It is my business - I never mix pleasure with business.

Human nature is a complex thing. It was I who taught Ravi to fight falsehood, wickedness and injustice. But when I found myself under similar circumstances I developed cold feet. I went to the extent of forsaking my dear friend and his wife Lata who was more than a sister to me. But when the question of Kusum's marriage came I took a bold step and decided to marry her inspite of gossips and Ravi's warring.

Woman is not only a bundle of sex. She is mother, sister and wife too. Next to god, I loved my Rambhaya and look - that only brought untold miseries in my house.
Anil Dhawan (Ravichand)

Lies repeated many times become truth. A wicked trick, but it compelled me to desert my family and landed in Bangalore from Agra, where I met Ram. He helped me to start life once again. We became friends-two bodies-one mind. But because of a single judgment of mine in Ram's case I paid a heavy price.

I told them - leave it to Murliwala of Brindavan, but who cares for me. God's truth is that if all girls become innocent like Kusum, the world will be Heaven..... Oh - the theatre is dark, look here.... Starts......... "PYAR KI KAHANI". 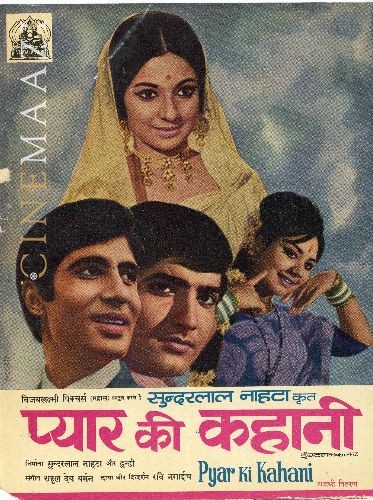