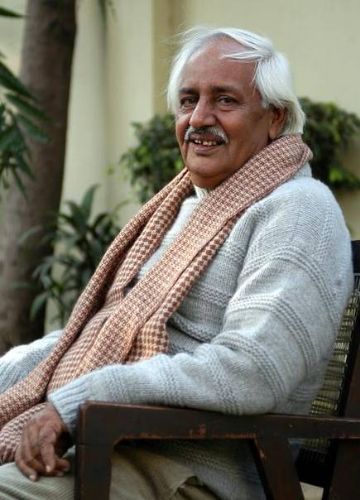 Writer of evergreen hits such as Kabhi Kabhie (1976), Silsila (1981), Chandni (1989) and Deewana (1992) as well as director of the exceptional Bazaar (1982), Sagar Sarhadi is acknowledged as one of the finest storytellers in the Hindi film industry. His work as an Urdu playwright is also acclaimed. Known also for his work on Anubhav (1971) and Noorie (1979) he also bagged the Filmfare Award for Best Screenplay and Dialogues for Kabhi Kabhie.

Born Ganga Sagar Talwar in 1933 in Abbottabad, Baffa, he later changed his name to reflect his connection with the North West frontier province. At age 6, he lost his mother to TB which was incurable at the time. Films were a welcome pastime. In fact, once returning home after watching Heer-Ranjha (1948) for the second time, his elder brother boxed his ears asking, ‘Why did you waste money by watching it twice?’ Sagar simply had no answer! His abiding passion for cinema would one day drive him to write and direct films.

He was just 12 when he and his family thwarted death and escaped to Srinagar and then on to Delhi, post Partition. Pained by being uprooted from his hometown and compelled to live in a refugee camp followed by crowded rooms, he was haunted by memories of his hometown and childhood which were left behind. In order to give vent to his anguish, he picked up the pen and poured out his feelings in his writing.

On completion of his matriculation in Delhi, he moved to Bombay, where his elder brother had set up a cloth shop. Enrolling at Khalsa College, he was impressed by his senior, Gulzar who spoke Urdu fluently and quoted Mir and Ghalib liberally. Realising he himself was not sufficiently well-read, he decided to improve his understanding of Urdu literature, by reading extensively. In fact, he even switched to St Xavier’s College in his final year, to further enhance his experience of English. With his father, a once-prosperous man, passing away, and his brother struggling to make ends meet, Sagar began teaching at an educational institute at a low wage, taking up employment at a typing institute. He was not a success; his efforts at driving a taxi and managing his brother’s cloth shop in the afternoons were a failure as well. That is when Sarhadi realised that writing was what he was meant to do.

He started to attend the Sunday literary meetings at Red Flag Hall at Grant Road, which housed the Progressive Writer’s Association. Here he was exposed to famous Urdu writers such as Rajinder Singh Bedi, Ismat Chugtai, KA Abbas, Sardar Jafri, Kaifi Azmi and others, who read out their stories. It was here that Sarhadi picked up not just the nuances of writing but also the understanding that our existence is inconsequential if we lack in compassion. From among the Progressive writers, Sarhadi also forged a close connection with Sajjad Zaheer and Kaifi Azmi. Virtual father figures, Zaheer encouraged Sarhadi to write and get published, while Azmi helped him overcome the disappointment of his plays repeatedly failing.

While he did go on to find well-paying work with a British advertising company, translating English commercials into Urdu, he gave it up two years later to focus on reading and writing. Realising he would need additional sustenance as earnings from being an Urdu writer were insufficient, Sarhadi decided to explore films. His first break came after a long period of struggle when he bagged the opportunity to write the film Patni (1970). He went on to pen the dialogues for Basu Bhattacharya’s Anubhav (1971), along with Kapil Kumar. The film was the first part of Basu Battacharya's introspective trilogy on marital discord in an urban setting; it went on to win the 1972 National Film Award for Second Best Feature Film. Sarhadi next wrote for two low-budget films, Savera (1972) and Alingan (1974). His big break came his way serendipitously—once filmmaker Yash Chopra happened to be watching Sarhadi’s play Mirza Saheban at Tejpal Auditorium in Bombay. Chopra was so impressed by Sarhadi’s direction and crisp dialogue, that he immediately offered him the chance to pen his next film. Thus, did Sarhadi come to write Kabhi Kabhie, a critical and commercial success, which elevated him to the top. The offers flowed in; however, Sarhadi refused most of them. His reason: he required only a limited amount of money to survive on, but he wouldn’t do without sufficient time to read and write. He did pen the screenplays of Yash Chopra’s much-appreciated Silsila, Noorie, and Chandni, always appreciative of how the filmmaker, despite being a leading name, rarely if ever suggested changes in his screenplay and dialogue. While Silsila is hailed for being a sensitive depiction of extramarital love and has a cult following, Noorie, a doomed romance was a superhit, while Chandni was also a big success, following the tale of a young effervescent woman torn between two suitors.

With fame, money and awards in his grasp, Sarhadi yearned for more, for something that went beyond the limits of commercial cinema. Disturbed by the trend of the fake marriage market, wherein poor young women are tricked into marriage and subsequently deserted by their elderly husbands, he researched the issue thoroughly, and penned the screenplay of Bazaar. When his script failed to find takers, he collected funds and directed it himself, gathering a fabulous cast that comprised Naseeruddin Shah, Bharat Kapoor, Farooq Shaikh and Smita Patil. Though he lacked directorial experience, having never directed a film before, his vast reading helped him conceive the scenes clearly before he shot them. Eventually, Smita Patil told him that he was the best director she had worked with! Initially, Bazaar didn’t find distributors but when it was released, it became a jubilee hit. The film also found resonance in Pakistan, where such occurrences were common.

Next, Sarhadi produced Lorie (1984) for his nephew Vijay Talwar, a Shabana Azmi and Farooque Shaikh-starrer, which did not click at the box office. His next directorial, Tere Shaher Mein, was a depiction of flawed justice. However, owing to the producer’s financial issues, Sarhadi was compelled by the financier to return the amount, leaving him in a financial crisis. The film itself was never released, owing to the dispute.

Braving the circumstances, Sarhadi directed a few television serials and also wrote Deewana (1992) as well as the dialogue of the Hrithik Roshan debut film Kaho Naa… Pyaar Hai (2000). The success of these projects proved that Sarhadi hadn’t lost his grip, and could move with the changing times. Remaining a Marxist at heart, determined to improve the world, he made Chauser (2004). However, the hard-hitting film, which highlights corruption in public life and presented Nawazuddin Siddiqui in his first outing as a hero, failed to find distributors.

Committed to his craft and idealism, he spent the latter years of his life all but forgotten. Yet he continued to read voraciously and pen down his story ideas for films. Acknowledging that stories with substance and depth had long been replaced by technical gimmickry and star-centric fluff, he continued to hope to be able to make the sequel to Bazaar. It was his belief that to lose hope in bleak times was akin to losing the will to live and work.

Remaining unmarried, Sarhadi had revealed that when he was young he couldn’t afford marriage, and by the time he began doing well for himself, he discovered that the institution of marriage didn’t suit him.