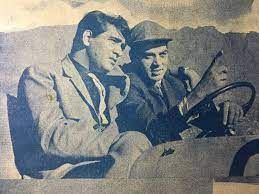 Actor Sailesh Kumar is known for films such as Adhi Raat Ke Baad (1965), Kalicharan (1976), and Charas (1976). Born in Jodhpur, Rajasthan, he went on to change his name from Shambunath Purohit to Sailesh Kumar for his career as an actor. He was also credited as Shachin in some of his films, and went on to feature as leading man in many small-budget films, and supporting actor in larger productions.

Bagging a small role in Nai Maa (1960), directed by the well-known PL Santoshi with Balraj Sahni in the lead, Sailesh Kumar garnered attention in the industry with producer-director Sadashiv J Row Kavi’s Bhabhi Ki Chudiyan (1961), the remake of a Marathi film. It was said to be his favourite film. He played the younger brother of Meena Kumari’s husband (Balraj Sahni) in the family classic, which is also memorable for the Lata Mangeshkar-song Jyoti kalash chhalke.

He went on to ink a three-film deal with Kavi. The second film was Begaana (1963), which saw him featuring in the film’s most popular number, Phir woh bhooli si yaad aayi hai, picturised against the Taj Mahal.

It is said that the actor spent some of his earlier days in theatre before joining the film industry, which reflected in his careful portrayal of characters ranging from romantic, to more serious roles. He was known to have a charming personality and enjoyed hobbies like swimming, riding and even reading, and had an affinity for author Pearl S Buck and Ernest Hemingway. Tall and good-looking, he was often cast in supporting roles instead of big leading characters, and was at his dashing best onscreen in song sequences, which were lapped up in the 1960s. Memorable mentions are the energetic Hai main mar jaaon in Golden Eyes: Secret Agent 077 (1968), a take-off on James Bond co-starring Mumtaz, with Sailesh playing the stylish secret agent.

Sailesh Kumar went on to feature on the cover of film magazines. He acted in quite a few big banner films and with bigger stars, albeit in side-hero roles. He essayed the leading role in many low-budget ventures such as Bekhabar (1965) and Oos Raat Ke Baad (1969) which failed to draw in audiences. He was, however, impressive in the smaller role of Meena Kumari’s outgoing brother and Dharmendra’s friend in Kaajal, a lavishly mounted melodrama which became a box-office hit in 1965. The same year he also acted in Manoj Kumar’s Shaheed.

After a promising start in the early 1960s, he gradually faded away. He was paired opposite Tanuja in Nai Roshni (1967), and in Begaana (1963) he completed the triangle with Dharmendra and Supriya Chowdhury, who was one of the top heroines of Bengal at the time. In several smaller budget films such as Aadhi Raat Ke Baad (1965), which featured the song, Bahut haseen hain tumhari aankhein, he played the leading man.

He developed a thyroid problem in the 1980s, due to which he had to retire. After his career as an actor in the Hindi film industry failed to further endure, he moved back to his hometown of Jodhpur.

On the personal front, he was married to Pushpa. The couple had a daughter named Ashima.