THIS IS RAM. In gorgeous palace stays a sanyasi - a religious minded young man who runs away from the wedding nuptials...

THIS IS AARTI - Today's Menaka. Yesterday's Menaka tried to disturb saint Vishwamitra's communion with God and today's Menaka, Aarti tries to distract Ram's mind away from his religious thoughts. She adopts many disguises and agrees to do what one least expects a noble, attractive and good girl like her to attempt ...

This is Ram's mother Renuka Devi. Her husband ruined his life while he was still young, because of his many vices like drinking and womanising. Not wanting her son to be like his father, she has from his childhood kept Ram surrounded by a religious atmosphere and he is brought up on books like Geeta, Ramayana, Mahabharata and writings of Tulsidas and Kabir. The result is that Ram grows into a young man so different from all other young men-a youth who has no interest in the normal life a true 'Sanyasi' !

They are - Girdhari and Banwari. In fact, they are robbers but they have entered the house of Ram in the disguise of his uncle and cousin, posing as father and son. They have taken the place of Renuka Devi's brother and his son who died in a train accident. Ram's mother embraces them as her long separated dear brother and nephew - but does not know that these two devils are there to swindle her of all her belongings and happiness.

This is Shanti Baba - a true "SANYASI", Who can kill the soul that lives only to bring happiness to others? The most unforgettable screen character you have ever come across - the "Sanyasi " who lays down his own life in order to rescue a helpless woman from the clutches of the evil Mangal Singh.

This is Ishwar Baba a fraud, a blot on the very noble tribe of saffron-clad sansyasis. Infact, he is dacoit Mangal Singh, a murderer, rapist and drunkard. But in day time he poses as a recluse, pretends to perform miracle to impress the unsuspecting devotees and claims to be an incarnation of Brahma, Vishnu and Shanker.

This is Radha, the woman who poses to be the Great Disciple of Ishwar Baba. In fact, she is an innocent bird trapped in Ishwar Baba's cage of evil-dancing to his tune but one who does her true duty when the right time comes.

You will be surprised to read these unusual introductions of a few characters from the film "SANYASI" "SANYASI" "WHO IS SANYASI"? - WHAT IS THE STORY OF SANYASI"?

But this is not a story to be read -- it is a story to be experienced --- Come and have ‘Darshan" of "SANYASI'' with your own eyes! 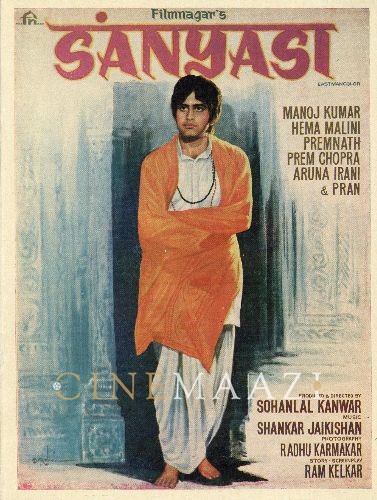