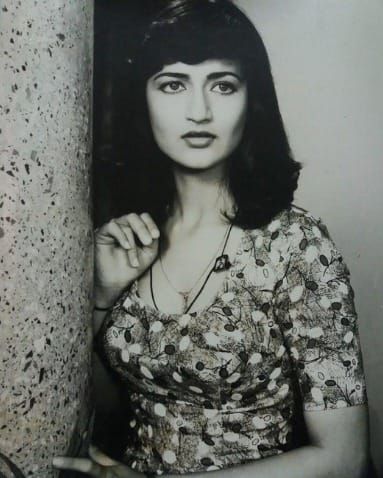 She was born Sarika Thakur on 3 June, 1960 to a Rajput mother and Maharashtrian father, who was a photographer. When she was just a child, her father sent a photograph of hers to the Times of India group to enter her into a competition. Though she was too young to be considered, a journalist who was struck by her face called up one of the biggest film producers, B R Chopra, to inform him of a possible child artiste in the making. Meeting up with the filmmaker, she was signed up immediately, and soon faced the camera as a child star. She was 4 years old. Meanwhile, by the time the film neared completion, her parents parted ways. Just a child, Sarika was groomed to be the breadwinner of the family after the departure of her father. Her most popular appearance as a child artist was in the year 1967 in the hit musical Hamraaz. She was seen as the daughter of Vimi named baby Saarika.

Making the rounds of production offices, she was signed on for more films. Her performances found appreciation; not just cute-looking, she also had the ability to emote as required on demand. As Master Sooraj, she played both boy and girl parts onscreen. Education took a backseat; Sarika never went to school and did not know to read or write till she was 11. After a tutor was hired, Sarika motivated herself to learn to read and increase her bank of knowledge. Reading went on to become a passion for life.

Outgrowing child roles, she graduated to playing heroine at just 13. She debuted in Rajshri Films’ Geet Gaata Chal (1975), opposite another former child star, Sachin. Sarika went on to be hailed as a teenage sex symbol. She and Sachin also went on to be paired together for several films.

At age 21, she finally found the courage to break away from her abusive mother, who was known to control her every move and physically assault her in private and in public, besides controlling all her finances. Sarika would later explain her docility saying, “When you have been brought up one way with just one parent and no family, that becomes your sense of roots.”
She went on to sign a range of films, both mainstream as well as off-beat with the likes of Hrishikesh Mukherjee and Basu Chatterjee. Her fair colouring and light eyes often saw her cast as a westernized girl. Some of the films she has featured in over the decades are Kaagaz Ki Nao (1975), Khushboo(1975), Raksha Bandhan (1976), Anpadh (1978), Devtaa (1978), Jaani Dushman (1979),Jaan-E-Bahaar (1979), Griha Pravesh (1980), Nazrana Pyar Ka (1980), Dahsat(1981), Dil Hi Dil Mein (1982), Jyoti Bane Jwala (1980), Teesri Aankh (1982), Vidhaata (1982), Bagga Daku (1983), Raaj Tilak (1984), Akalmand (1984), Razia Sultan (1983), Aakhri Sanghursh (1997), Ajeeb Ittefaq (1989), Baabul (2006), U Me Aur Hum (2008), Tahaan (2008), Yeh Mera India (2009), Hari Puttar (2008), Jab Tak Hai Jaan (2012), and David (2013). While she essayed the role of a doctor in Jab Tak Hai Jaan, she featured in a qawwali song in David. Parzania saw her play the challenging role of the mother of a Parsi boy who goes missing during the Ahmedabad riots. She more than held her own opposite the formidable Naseeruddin Shah, going on to bag the National Award for Best Actress for her performance. Critic Khalid Mohamed had praised her performance, noting, “Sarika is marvellously restrained and lifelike, making you care for Parzania straight from the heart.”

On the personal front, she was in a relationship with megastar Kamal Haasan, whom she was cast opposite in Karishmaa(1984). They married in 1988 after the birth of both their daughters, Shruti and Akshara, as per Sarika’s own wish. Quitting acting in Hindi films, she built a new life in Madras, also doing costumes for Kamal’s films. In 2000 she even won the National Film Award for Best Costume Design for the Kamal Haasan-starrer Hey Ram. After the breakdown of their marriage, Sarika moved out and returned to Mumbai in 2004 at the age of 43, to pick up the strands of her career as an actress. Winning accolades for Parzania, she also played Ipsita Ray Chakraverti in the film Sacred Evil – A True Story (2006) which failed at the box office. She also starred as Sheetal Thadani in Bheja Fry (2006), playing the wife of Rajat Kapoor. While she had a small but significant role in Manorama Six Feet Under (2007), she featured opposite Amitabh Bachchan in Shoebite (2019). The film was based on the story Labour of Love penned by M Night Shyamalan. She also featured in the Marathi films Paradh (1977) and Kaccha Limbu (2009).
Sarika debuted on television with Sony TV's Yudh starring Amitabh Bachchan in the lead role.

Decades later, Sarika managed to locate her father, to discover that he had remarried and had had other children, but had also proudly kept track of her career achievements. She did not stay in touch with her mother, declaring that wherever her deceased mother is now, she did not want to hurt her by remembering things that were in the past.