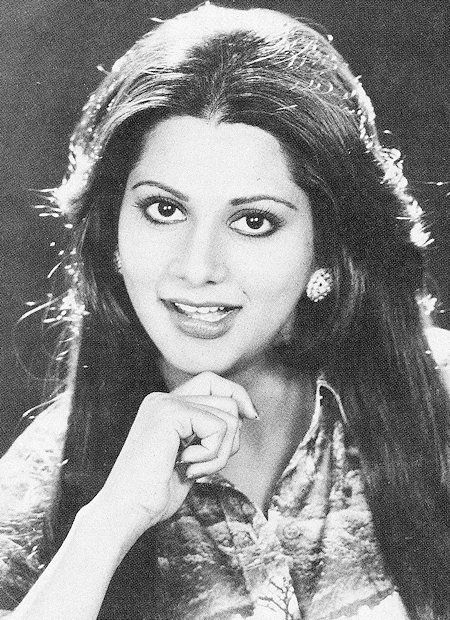 Like the rest of the howling mobs, I too had certain pre­conceived notions about Miss Asha Sachdev. That she was deadly sexy, deadly fast. That she was crazy about Dharam. That she had this big thing going with this guy. These and a lots of similar notions/stories/pieces of fiction, buzzed around the brain when I called her over Dr. Bell's instrument recently in Calcutta. She sounded friendly, warm, cute, chirpy. Yes, Shailendra Singh had spoken to her about  me. Why didn't we meet this evening at her hotel suite? No, no tape-recorders please, just old faithful pad and pencil or something. Okay teacher, I said, instantly abandoning the idea. Five-and-a-half minutes after the appointed time Shailenndra Singh had visually revealed great disturbance and imbalance at my punctuality earlier! Asha, a somewhat-ahem-­bigger name, might tear her hair, I reckoned. I buzzed her suite-buzzer, almost immediately getting a "come in" reply. I did that to find Miss Sachdev having a chat with her Calcutta producer and director Ashish Roy and Kanak Mukherjee respectively. She had come to the city to do a Bengali film against new young heart-throb Ranjit Mullick or Parivartan (1972) and Naya Nasha (1973) de-fame. I introduced myself to her and she smiled warmly -nice mouth and in turn introduced me to her two chiefs. We exchanged pleasantries for a while before her mother and hairdresser swept in after a mini-shopping spree. Sure, I had heard a lot about her mumsy-wumsy's young looks, but Jeez, she beat everything I heard!

Anyway, very soon her producer and director split and Mummy and hairdresser sweetly retired to grab some rest. (God knows they needed it. They were to see Dharam Karam (1975) that night !) clearing  my  throat  and  saying,  'yes'  to  a cuppa chai, I sort  of  started.

Where do I  begin,  I mentally  yelled  to myself  a wee-bit  confused - till Kamaal-ki-cheez dawned! But of course, what better opener than her so-called "reputation"? Obviously, this was not one of her favourite subjects. "This reputation-bit-of ­mine has been played up so much by all and sundry that there's practically no more play left!  Okay,  I  am  not  denying the fact that part of the fault lay  in  my  professional naivette, my frankness, my straight un-hypocritical talk, my honesty. But people have this wonderful knack of twisting simple words, gestures and decorating them with monumental symbolic meaning! Yeah sure, I  am  a  great  admirer  and  fan of Dharam and it's only because of this  that  I  am  doing  a small guest-role in his Mahaguru, does anyone mind Shyam Keswani next, huh? Shyam was a very close and  special friend; gentle, polite,  fun  to  be with,  Shyam was totally unlike most of the lecherous types whose lives seem to centre around 'grabbing'! But no - I had to have a solid, torrid affair with Shyam. So what to do? No problem, manufacture one! Why hamare peeche sub padey hain pata  nahin. Because of my deadly wild reputation at the FTII? Look, let's get one thing straight: What happens at the Institute happens everywhere. When a young girl goes to college for the first time isn't she thrilled with her new-found-freedom?   Doesn't she feel great? Isn't she ecstatic at the thought of dancing at a disco or going out for long drives with a bunch of pals? That's what happened there. Sure, I had boyfriends, but most girls did, so what's the sweat about anyway."  She paused, and just lost out to Mr. Hamlet for the most-durable-soliloquy award. "Things actually went wrong after a couple of my photographs appeared in a leading film fortnightly, exposing my...." bosom? I hopefully suggested. "Yes, it was admittedly very stupid and foolish of me to have those pictures taken. I guess it's no use blaming the press for having played it up.... And golly-gee-whiz did they play it up?

Time for a change of scene I thought, and moved to her career- but not before I had mentally made a note of returning (with feeling?) to her reputation-bit. She hadn't hit the high scots as many other equally, even less qualified aspirants, had Rekha and Neetu for example. "Rekha, you must not forget was presented superbly in her very first film Sawan Bhadon (1970). Rekha's cycling-act without a cycle and in a reclining position flashed through the brain. Superb presentation. Also very unusual and imaginative and mindboggling!

So, Asha Sacbdev is determined to turn a new leaf. And has already done so.

This article was written by Manojit Lahiri and was originally published in Star & Style magazine's 2 July, 1976 issue. The images used are taken from the original article and the internet.
1371 views