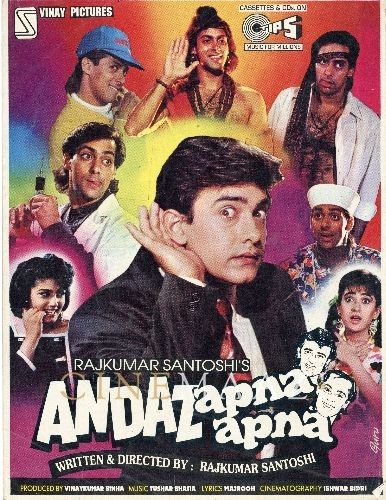 There are a few instances when audiences, filmmakers, critics and other members of the trade such as distributors and exhibitors share the same point of view and the box-office failure of Andaz Apna Apna (1994) happens to one of those.

Released two decades ago Andaz Apna Apna (AAA) with it's casting coup that brought together Aamir and Salman Khan, two of the most popular stars of the era, and pitched them with a bevy of comic legends Mehmood, Jagdeep and Devan Varma under a hotshot director in Rajkumar Santoshi was just the stuff that Bollywood dreams were made of and yet it failed to set the box-office on fire. While the mystery surrounding its lackluster first run continues to grow with each passing year, the last twenty years have seen the film transform into a cult classic whose charm only increases with each viewing.

Legend has it that it was AAA’s producer Vinay Sinha who approached Raj Santoshi with the idea of making a film with Aamir Khan. With two back-to-back dramas in Ghayal (1990) and Damini (1993), Santoshi was looking for something lighter and Aamir till that instance hadn’t done an all-out comedy. Khan’s comic timing in films such as Dil (1990) and Dil Hai Ki Manta Nahi (1991) had revealed his funny bone but it took Santoshi’s laugh-a-minute script to really tickle it. Santoshi then decided to bring Salman Khan to the party followed by then relative newcomers Karishma Kapoor and Raveena Tandon as the female leads along with Paresh Rawal in a double role. But while these factors added to the film they aren’t what made AAA truly unique then and a cult favorite now.
What essentially makes the film exceptional is how using everything contemporary AAA chose to doff its hat to an era that saw some of the best comic films in Hindi cinema.

The period of early 1990s, when AAA was under production, is a very unique phase as far as comedy in Hindi cinema went. This was a time that was perched between the two slapstick phases — one that was the 1980's Kader Khan-Shakti Kapoor-Aruna Irani-Jagdeep-Asrani mindless southern remake onslaught and the other that was the David Dhawan-Govinda-Kader Khan-Johnny Lever Raja Babu (1994), Coolie No 1 (1995), Saajan Chale Sasural (1996), Hero No 1(1997), and Dulhe Raja (1998) period.

Unlike the 1960s that had a dedicated comedy track featuring Johnny Walker, Mehmood or Tun Tun, Shashikala and Agha running parallel to the main plot, the 1980's trajectory was loud, lewd and even disconnected from the main film. AAA’s plot of two good for nothing dreamers, Amar and Prem (Aamir, Salman), leaving no stone unturned to win the heart of a rich heiress, Raveena Bajaj (Raveena Tandon) in order to strike it big while circumventing her secretary Karishma (Karishma Kapoor), who incidentally is the real Raveena, and the diabolical duo of her staff, Bhalla and Robert (Shazad Khan, Viju Khote) who are actually pawns of Raveena’s Uncle Teja (Paresh Rawal), the evil twin of her businessman father Ramgopal Bajaj (Paresh Rawal, again), who wants to kill his brother to take his millions in order to pay off ‘Crime Master’ Gogo (Shakti Kapoor) offers a lot of scope for situational comedy that was a hallmark of the 1960's funnies. AAA’s screenplay, music and even the execution of key scenes are a throwback on the 1960's comedy films such as Dil Tera Deewana (1962), Pyar Kiye Ja (1966), Shagird (1967) and of course, the inimitable Johar-Mehmood series.
In the making for almost 3 years, something that would be practically unimaginable in this day and age, AAA simply failed when it first released. Unlike Mughal-e-Azam (1960) and Pakeezah (1971) that largely managed to hide visual giveaways of the years they spent in the making, AAA’s long duration of production can be gauged from a scene where the styling and the length of Aamir and Salman’s hair changes three times in a single scene where they go up and down a staircase! The popular reason citied for the film’s dismal performance was the lack of publicity during its release; some say that the film’s posters weren’t ready even three days before the release date. One would believe that a film featuring Aamir and Salman Khan might not need a lot of publicity but the numerous delays and false starts for the release perhaps damped the audiences’ as well as trade’s response. Publicity might have also helped because Salman was going through a bad phase at the time of AAA’s release and it was after Hum Aapke Hain Kaun (1994) and Karan-Arjun (1995) that his box-office pull returned.
Shakti Kapoor played the infamous character Crime Master Gogo. This is one of the most epic scene from the film.
It’s ironic that time, an ungenerous facet in the form of visual continuity jerks when it comes to the imagery of AAA, is the very thing that has been more than kind to the film and allowed to age brilliantly. In the tradition of Sholay (1975) and Jaane Bhi Do Yaaron (1983) Andaz Apna Apna is perhaps a close third where a film’s dialogues have entered popular lexicon. The film’s lines such as ‘Aapka plan hi galat tha’, ‘Lagta hai kacha khiladi hai’ ‘Yeh Teja Teja kya hai’, ‘Main Teja hoon mark idhar hai,’ ‘Gham ka saathi rum’, ‘Jab dil toota hai to asar seedha deemag par hota hai’, 'Ajeeb gale-padu ladki ho’ among others are a part of everyday lingo and like the other two never fail to bring a smile to the faces.

There have been rumors for years that an Andaz Apna Apna sequel is in the pipeline but unlike the original’s failure at box-office, there is hardly any mystery here. The sheer logistical impracticality renders an Aamir and Salman reunion impossible and Santoshi isn’t unaware of this but, nonetheless, fans the thoughts of two younger actors becoming Amar-Prem version 2.0. Looking at Andaz Apna Apna today it’s more than clear that some films are best left untouched or hasn’t a disaster called Ram Gopal Varma Ki Aag (2007) has taught us anything.

This article was originally published in Firstpost on April 12, 2014. Images used in the feature are taken from the Cinemaazi archive and the internet.
431 views