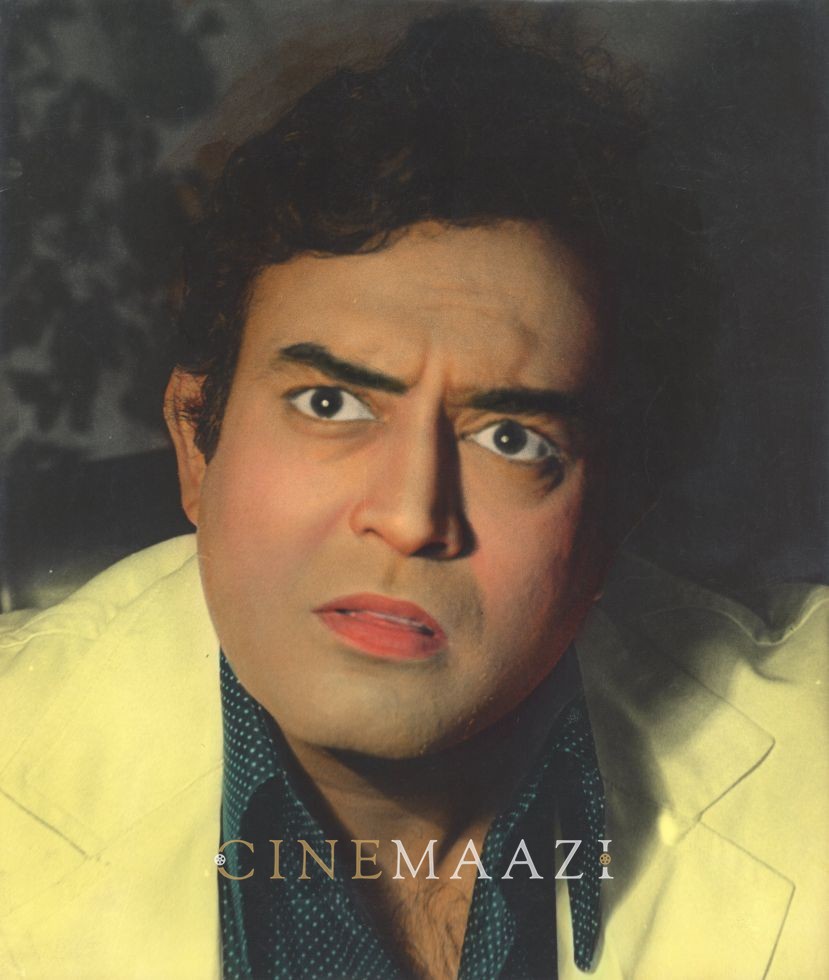 I bumped into him at Dr. Jussawalla's Nature Cure Clinic, where I have been going of late in an. attempt (vain so far) to shed excess avoirdupois! He was there for the same purpose, and he seemed to be succeeding more effectively than I was! But then, you see, I'm not playing Majnu - he is!

Sanjeev Kumar was already slogging away in several run-of-the-mill pictures when K. Asif (puffing that contemplative cigarette of his through the now-famous clenched fist smoking style which we had all become so familiar with throughout the making of Mughal-E-Azam (1960)) came out of his many months' prolonged contemplation and con-centration and saw Majnu, the immortal lover of legend, in Sanjeev Kumar.

An actor may go on and on working in in-numerable kitchen pictures (as Nadira terms those pot-boilers which artistes per-force do from year to year to keep the home fires burning!) and they never get him any-where until that one magic assignment comes along which flings an actor into the limelight, the big-time.

K. Asif's selection of Sanjeev Kumar for Majnu definitely came as a surprise both to the industry and the cinemagoer who had, traditionally, always conceived Dilip Kumar as the immortal lover. But then, Dilip Kumar had long since shrugged off the Tragic Lover mantle, and any other actor in the same mould was just not good enough. In any case, the original choice of Guru Dutt had itself been unconventional and striking — and trust Asif to be as unconventional and striking second time out!

So, a couple of years back, Sanjeev Kumar became Majnu in K. Asif's spectacular Love And God. Speaking of the characterisation, of the interpretation of it, Sanjeev said: The role has been interpreted consistently, in a graph which eschews melodrama. There is no loudness whatsoever. On the contrary, there is an intense underplaying. There is this feeling of a tremendous cyclone of emotion about to burst forth from the characterisation — but always kept with-in control.

For Sanjeev Kumar, Majnu provides a vivid contrast to his madman's role in Prasad's Khilona (1970) for example, where the character was sketched in broad and bold lines, not in the quiet, delicate tints which have gone into the mosaic of Sanjeev Kumar's Majnu in Love And Gold.

Sanjeev Kumar's career began in 1961, on the stage. A shy, introverted schoolboy, Harihar Jariwalla (that's his real name) always wanted to be an actor. But he had this immense shyness to contend with, an impediment which came in his way even while functioning as a prompter behind the scenes!

His job was to prompt the actors on stage when they forgot their lines, but the actors complained that they couldn't hear a thing he said while prompting! This was at I.P.T.A. and most of them felt: What good is an aspiring actor who cannot make himself heard even while prompting?

Then one day an important artiste fell ill and the role had to be filled in a hurry. Harihar asked for a try-out but they scoffed at him. He persisted, and they reluctantly gave him the chance. It was a one-act Hindi skit called Majma, and Harihar played an eccentric Parsee character in it. He was good of course, and in the next three to four years he got better and better roles on the stage.

When the introvert in an actor begins to come to terms with extroversion, the quality of histrionics begins to improve. This is what happened to Sanjeev Kumar, whose early-stage training is reminiscent of the sort of things Sir Alec Guinness used to do much earlier: all sorts of vivid, even funny, characterisations using strikingly different facial appearances and make-up.

During these years on the stage, Sanjeev cut his histrionic teeth on character roles. His first full-length part was in a Hindi adaptation (entitled Damroo) of a famous Telugu play called Bhayam by Acharya Atreya. Here, Sanjeev played the father of six children and he was only twenty-one years old! After this, he did the father's role in the Hindi and the Gujarati adaptations of Arthur Miller's All My Sons for which he won a prize (his second)  the Best Actor Award of Maharashtra State for stage acting. His first trophy for acting had been the Medal which he won as a student when he did a scene and a song from Raj Kapoor's Awaara in school (Nanavati Vidyalaya, Bhuleshwar, in Bombay).

"I have learned most from Raj Kapoor, Sanjeev confessed. He has been my greatest inspiration."

Sanjeev came to films via Tarachand Barjatya — who called him, then cancelled him! Apparently, the film magnate, after having a screen-test of the young aspirant taken, asked him how he felt about the test. Sanjeev, feeling that he could have done much better, said that it was no good. "If you yourself feel that you're no good, how would you expect others to feel you're good?" So out he went!

Disheartened and broke, Sanjeev turned back to the hereditary family business (jari). But it was no good. He had this acting thing in his blood- from as early. as he could remember, He kept on seeing the films of Sir Laurence Olivier, Sir Alec Guinness and Marlon Brando, and he knew he was not cut out to be a jariwalla. So he made a second start.

This time he secured an extra role in Filmslaya's Hum Hindustani (1960). He played police inspector on Rs. 35 per day wages. He also joined the Filmalaya School of Acting. He got a better role in Filmalaya's Aao Pyar Karen (1964), and at roughly the same time he got the second lead in a Gujarati film called Ramat Remade Raam (1964). Aspi Irani saw the rushes of this film and signed Sanjeev Kumar for Nishaan (1965), in which he was given a dual role: both the hero and the villain.

"There was a lot of scope for acting in that movie,: said Sanjeev. "saAnd I still consider it to be one of my best-acted films."

As luck would have it, the film was released at Taj Talkies in Bombay during the Inclea Pak conflict. It ran for Just three weeks, at one show per day only, because of the black-out. Within a week of the release of Nishaan seven or eight offers came to the young actor, and it was now that he met K. Asif.

The Mughal-E-Azam man was at work on Sasta Khoon Mehnga Pani (1970), and Sanjeev went to see him with a whole lot of press-cuttings and photographs relating to his stage-work. Asif brushed aside all this abruptly. He looked at the young actor and said: "You're working with me." That settled, Sanjeev got a role in Sasta Khoon Mehnga Pani.

Among all the films he has done, Sanjeev Kumar considers these to be his best, acting-wise: Nishaan; Badal (1966), in which he has three or four different disguises; Shikar (1969), Sunghursh (1968); Khilona; and Sudesh Kumar’s forthcoming Man Mandir (1971).

"But my most difficult role is In a small-budget, black-and-white film called Us Raat Ke Baad (1970)," said Sanjeev. It is being produced and directed by Y. B. Siraj. "It’s a story about a wealthy Thakur, and his son and daughter. I play both the father and the son."

During these years, Sanjeev Kumar has also done a few Gujarati films, and has twice won the Best Actor Award from the Gujarat State Government. At the moment, Sanjeev Kumar has several assignments on hand, out of which at least fifteen are genuine. But he looks forward to a time after a couple of years when he would be able to work in only three or four films at a time.

Despite his having to work virtually round-the-clock to fulfill his innumerable commitments, Sanjeev Kumar still takes time out to visit Dr. Jussawalla's Nature Cure Chalk regularly and also follows the doctor's advice regarding diet strictly.

"A fell-fed and prosperous looking Majnu would be just no good!" the actor chuckled, and went off for a grueling session of steam-bath and massage.

This article was originally published in Star & Style magazine's 25 December 1970 issue. The images used in the feature are taken from Cinemaazi archive and were not part of the original article.
1710 views